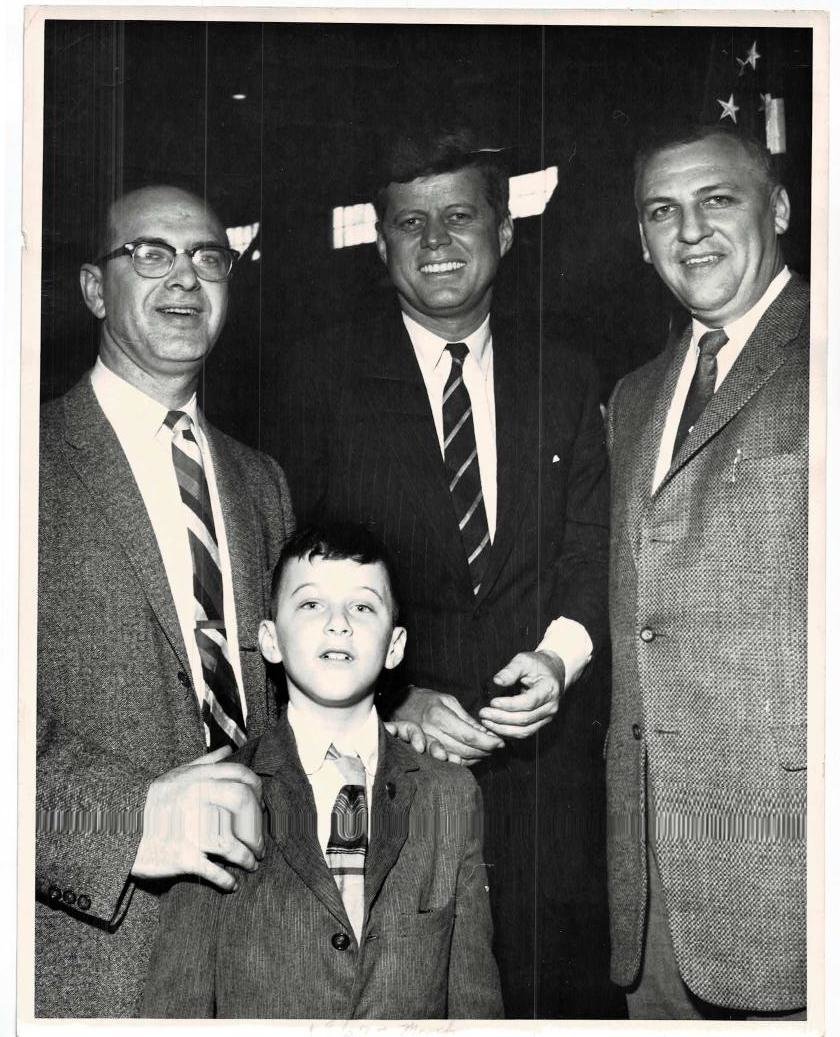 Robert Morris has been caught up in the Kennedy mystique since he was a little boy in Detroit. His father, Ken Morris, a top official at the United Auto Workers, would drag his sons to all kinds of political events. At a 1960 campaign event in Detroit, Morris, who was 8, found himself posing for a photograph with presidential candidate John F. Kennedy, his father and another UAW official.

Morris said that within the family, that iconic photograph is known as “the picture.”

Now, more than 60 years later, Morris has published “Secret Service Journals: Assassination and Redemption in 1960s Detroit,” a political thriller that revolves around the assassinations of John and Robert Kennedy and Martin Luther King Jr. and the possible ties to the death of former UAW Presient Walter Reuther.

Reuther and his spouse, May, died in a plane crash in 1970. At the time, there was some suspicion that the crash may not have been an accident, Morris said. Reuther had previously survived two assassination attempts.

Morris’ book begins with the activities of the Secret Service as seen through the eyes of young agent Bill Simpson, who is assigned to Detroit and works mostly on rooting out counterfeiters. Simpson is rotated to White House detail for six months, where he meets President Kennedy.

Later, Simpson finds himself on the security detail for a presidential visit to Chicago. An anonymous tip from a man named “Lee” reveals a plot to kill the president as he makes his way to downtown Chicago from the airport.

Simpson finds himself embroiled in internal Secret Service politics and potential corruption, something that sounds a bit like contemporary politics.

The book moves into the many conspiracy theories and coincidences that still are debated today about the Kennedy brothers, Martin Luther King Jr. and Malcolm X.

To that mix, Morris, who has had a lifelong interest in union activities, added Reuther’s death.

Following the publication of his last book, “Built in Detroit,” about the early days of the UAW, Morris said he began looking for a topic for his next book.

“I originally wanted to write about Harry Bennett, the enforcer for Henry Ford, but someone beat me,” he said.

Morris then discovered the conspiracy theory that Reuther may have been assassinated.

“I looked into it, but there was nothing there, but maybe I could do something tying Reuther’s death into a bigger plot,” he said. “The only thing I knew when I started the book was it had to be in the Detroit area. I lived there my entire life.”

In retelling the story of Detroit in the 1960s, Morris has captured the sights and sounds with a near-perfect pitch.

One scene, for instance, has Simpson and a friend going to the folk club The Chess Mate in downtown Detroit to see Joni Mitchell and her husband, Chuck, perform.

One of Morris’ goals in writing this book was to paint the labor movement in a positive light.

“They did a lot of charitable stuff behind the scenes,” he said.

The book follows Simpson through his short-lived career in the Secret Service, his being framed that garners him prison time and his job at the Ford tractor plant in Birmingham, which is described as “the country club” for UAW jobs. Morris knows that aspect well, since he worked at the complex as a “picker, packer, checker,” providing parts to dealerships across the United States.

It’s from his job at Ford, following the death of Reuther, that Simpson is recruited into the top UAW echelons to investigate.

From there, Simpson is pulled into the maelstrom of public corruption and shadowy characters who will do anything to stop the investigation. As the book ramps up its thrill quotient, it becomes obvious that someone will be added to the list of assassination conspiracy suspects, and Simpson will do anything to keep his name off that list.

In his research, Morris met with Paul Schrade, a UAW official who was with Bobby Kennedy when he was assassinated. Morris said his conversation with Schrade was enlightening. Schrade, who recently died at age 96, consistently believed that there was more than one shooter.

“About sixty percent of material in the book pertaining to Schrade is verbatim,” he said.

Despite thousands of books, both fiction and non-fiction, about the assassination plots, Morris, through his crafty addition of a low-level Secret Service agent and the ties to Reuther, has added a notable work to the genre. As readers delve into the book, they will likely find themselves nodding in agreement and whispering to themselves “I can see that happening.”