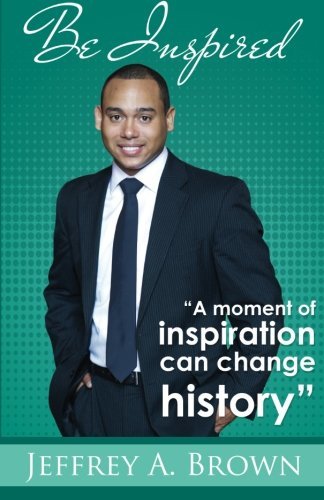 And while his “inspirational” writing — at least so far — hasn’t made any bestseller lists, I helped notch him one step closer to literary greatness this year when I bought a copy of his 2014 work, “Be Inspired,” which Brown describes as “an inspirational journey.” The foreword promised that the book would include “profound thought and truth that can unlock your greatest potential.”

Unfortunately, the book didn’t lead to any epiphanies. In fact, I finished it feeling quite the opposite: uninspired and disappointed for blowing about $12 on a bunch of mostly blank pages.

The self-published softcover is about 200 pages. Half of them are filled with unattributed quotes that are designed to “inspire” the reader. The others are just filled with blank lines — presumably where readers are supposed to detail their own “moments of inspiration.”

It’s a fun concept, which would make sense if Brown’s quotes were the least bit interesting.

Here are some of my favorite nuggets of wisdom from Brown. It’s pretty deep stuff:

“Tasks are not priorities. Priorities are what’s important.”

“Many people see opinion as bad, but that is opinion.”

“Our thoughts are kept in our most secret place, our heart.”

“What is the point of pointing out the point if there is no point? Wow.”

“Tweedle dee and tweedle dumb. Sometimes people treat you like you are dumb.”

Brown paid a few thousand dollars for his online master’s and doctorate degrees in theology, so his book also included a few faith-based references that describe the role that God plays in his life: “I don’t let God bring me down. I let him lift me up,” Brown wrote across one of the pages.

Most of the other entries were just a hodgepodge of buzzwords without a coherent point: “Commitment. Connection. Confession. Confidence. Charisma. All require consistent humility compromising opinion to operate from a prism of perspective through the lens of compassion.”

Here’s another: “Inspired to elevate. Elevated to empower. Empowered to lead. Leading to equip. Equipped to prepare. Prepared to succeed. Succeed to inspire. Inspired to create hope. Hope to believe. Believe to help. Help to share. Share to love. Love to live. Live to love. Wow.”

Brown also included one rather confusing entry about politics: “Politics is simply a word, in other words it doesn’t actually exist. However, every situation that we must face locally, nationally and across the globe does exist. Just a thought, but you know I really don’t get involved in politics.”

Several entries also appeared to have been written on an airplane and only promote airline travel: “I know the cost may be less traveling by ground but is it worth the experience, the time, and the possibility that where you are supposed to be cannot be reached by ground? Don’t be afraid and fly to your next destination. Let the wind carry you.” Others read: “Fly to your next destination. It’s the only way to travel.” and “See yourself at the airport purchasing a plane ticket to that promotion, to that island, to that vision, to that new car, to that husband. It’s FREE.”

I bought this book with the hope of finding out a little more about Brown because, frankly, Lansing didn’t really do its homework when it decided to elect him to the Council. And what we do know is troubling: He has a record of unsuccessful home healthcare businesses. He also filed bankruptcy in 2015, apparently costing employees tens of thousands of dollars in income. He has been known to pal around with Trump Republicans. And he seems perfectly comfortable with operating in the shadows; He hasn’t had an interview with local media outlets for months.

Unfortunately, this book only left me with more questions, like: Why did I waste my money?