She ate / He ate: Eclectic Capital City BBQ has something for everyone 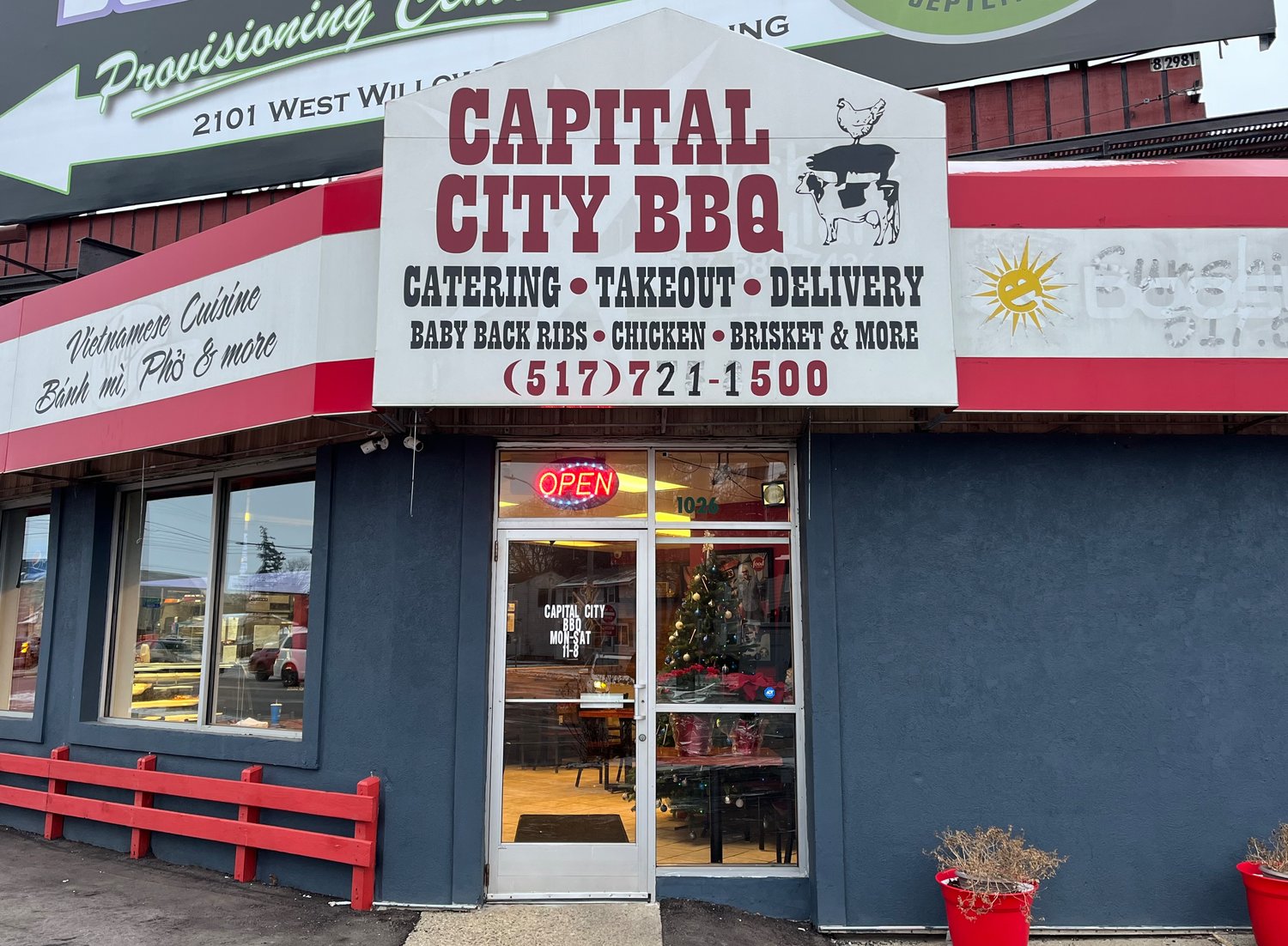 Though its facade has been renovated, you can still make out the remnants of the original cell phone store banner on the front of Capital City BBQ.
Nicole Noechel/City Pulse
Posted Thursday, December 22, 2022 12:01 am
Capital City BBQ

Growing up, my parents were very involved in providing support to Vietnamese refugees in the Lansing area. I never appreciated the uniqueness of having ham and mashed potatoes for holiday dinners alongside egg rolls, crab Rangoon and fried rice. This goes to say that I have eaten a lot of Vietnamese food in my life, and it is one of the cuisines that I like best in this world.

When the owner of Capital City BBQ announced a few weeks ago that she was struggling to keep the doors open, I, along with many other people in our community, responded to her request for help. Honestly, I’m happy she said something. It’s so disappointing when restaurants close with little fanfare, especially when, if the public had known they were struggling, we might have been able to help. Granted, I don’t want to blow my entire restaurant budget in the first month of the new year, but I hope this can serve as a reminder to business owners that sometimes speaking honestly and from the heart is one of the best marketing tools there is.

CCBBQ is one of the most eclectic restaurants in our area, offering two distinct types of food: Vietnamese and traditional American barbecue. The menu is split right down the middle. We dove headfirst into the opportunity to explore CCBBQ’s Vietnamese side of the menu during a recent visit, and I came home laden with chicken spring rolls ($8.49), shrimp spring rolls ($7.99), a pork bánh mì ($10.99), a chicken rice plate ($16.99) and a chicken noodle salad ($16.99). Having just clocked a full day of running around with no lunch break, I tore into a chicken spring roll on the drive home and was blown away immediately. Springs rolls are my preferred counterpart to the egg roll, the former being a fresh, not-fried roll wrapped in rice paper. In this version was a grilled, incredibly flavorful chicken thigh. The texture that comes from the chicken being grilled adds a perfect juxtaposition to the rice noodles and fresh cucumber, herbs and lettuce.

The noodle salad featured many of the same components, and as someone who loves both chicken thighs and rice noodles, this scratched an itch. I doused the rice plate in peanut sauce left over from the spring rolls and devoured it, poking the tines of my fork into the yolk of a beautifully fried egg and watching the jasmine rice soak it up.

However, my favorite item of the night was, without any close competition, the pork bánh mì. A bánh mì is a traditional Vietnamese sandwich served on a crusty, French baguette. The pork was juicy and played nicely with the generous helping of cilantro, and everything was elevated with the sriracha mayonnaise smeared inside the perfectly baked bread. I love a baguette that comes close to tearing the roof of your mouth because it is so earth-shatteringly crisp, and this bread fit the bill. I want this sandwich for lunch every day.

On another recent visit, we wreaked havoc on the barbecue side of the menu. Mr. She Ate and I shared a half slab of ribs dinner ($28.99), a pulled chicken dinner (half a pound, $20.99) and several sides. My favorite of the bunch was the french fries, which reminded me of the paper cups full of fries I used to get from Great Steak and Fry while I wandered around the Lansing Mall as a high school student. They were thick-cut, skin-on and benefitted from a healthy pinch of salt but were otherwise wonderful.

According to Mr. She Ate, who owns a smoker and does his research, there is a divide in the barbecue community about whether to remove the membrane from ribs before serving them. (For the record, he is team remove.) CCBBQ does not, but it made little discernible difference to me. The ribs were extremely tender but lacked texture and weren’t as flavorful as I was expecting. It’s possible I was less enthusiastic about the barbecue side of the menu because the Vietnamese side blew me so completely away, or it’s possible I just prefer Vietnamese food over barbecue. In any event, choose whichever side of the menu you prefer. Just remember to patronize Capital City BBQ. It could help one of our best local restaurants flourish.

Capital City BBQ has had its share of ups and downs over the years. From early days of sharing space with a cellular phone store to an appearance on Food Network’s “Diners, Drive-Ins and Dives” to recent calls for community support to keep the business afloat, CCBBQ has seen it all. Lately, the public seems to have heeded the outcry for patronage. On one of my attempts to visit, every table was filled, and several folks were standing in line to order. I decided it best to return later. 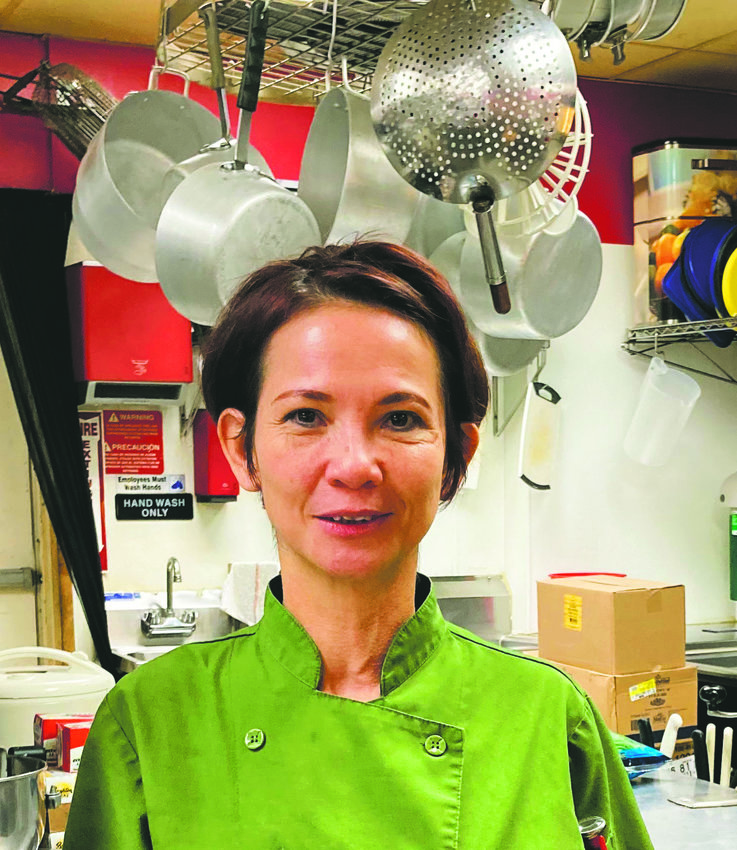 There’s a lot going on here, but that’s been the mantra from the opening. Food and cell phones (though that part of the business is no longer), fiscal and ownership drama that played out in public forums, Vietnamese and traditional barbecue flavors in the same kitchen and often on the same plate. Curiosity should bring you to visit, and the food will have you coming back.

On my first visit, I ordered a bunch of food for the family. For the kids, I got the pulled turkey ($25 per pound), which was lighter on smoked flavor than desired. You always expect a bit of dryness with turkey, but this was a little over the top. The restaurant was out of pulled chicken, which was what I really wanted in the spirit of avoiding this dry spell, but unfortunately, I didn’t have a choice. With supply chain issues being what they are these days, I can’t be overly critical, but it was a disappointment nonetheless. A saving grace for this dish was the array of sauce options, Dirty South being my favorite. My little girls also got baked macaroni & cheese ($7), which was just above average. It was baked, but no coveted, crispy topping. It was cheesy, and you can tell that real cheese is used in this dish, but I wasn’t wowed by the flavor. The french fries ($6) were better than solid, reminiscent of carnival fries, minus the much-beloved malt vinegar.

My much better half and I split both the brisket rice plate ($17) and the Big Gobbler ($15). The rice plate was enjoyable — the brisket had plenty of smoky flavor and was tender and juicy. The accompanying sticky rice and fresh veggies were delightful when drizzled with the tangy Vietnamese vinaigrette. The Big Gobbler is a turkey sandwich with sufficiently moist cuts of turkey (which made me wonder about the pulled turkey even more), blue cheese crumbles, thin red onion and apple slices and a bourbon barbeque sauce. This delicious alliance of ingredients will have you joyously reaching for napkins to clean up after yourself; the Big Gobbler is a winner.

Growing up on Lansing’s north side, I’ve eaten plenty of homemade lumpia (fried spring rolls) from the homes of classmates and have always been a fan. CCBBQ’s egg rolls ($5.49) were deliciously reminiscent of those youthful tastes and textures. Crispy, packed with fresh veggies and minced meat, the hint of spice in the egg roll itself was taken to another level with the sweet heat of the chili sauce. Yum. On a subsequent visit with a colleague, we ordered the chicken spring rolls ($8.49). This version is a thin, almost translucent wrap with a marinated chicken strip, rice noodles, cucumber, cilantro, mint and lettuce. The ingredients shined brightest when dipped in the peanut sauce.

It’s difficult to say whether CCBBQ’s Vietnamese dishes or barbecue fare are the stars. Maybe there isn’t supposed to be one. Case in point, the barbecue rib tips vs. the bánh mì. The rib tips ($16) are meaty and rival many of the award-winning barbecue spots around town in terms of flavor and tenderness. My chicken bánh mì ($12) came in an amazing baguette with cucumber, carrots, cilantro, green onion and a spicy sauce. The chicken had hints of lemongrass and was grilled nicely — a gem of a sandwich! I’m not afraid to admit, I smashed both with equal pleasure.

The baked beans ($6) are wonderful. I’ve never really been a fan of baked beans, but these will convert most skeptics. Smoky with chunks of yummy brisket and at least two different kinds of beans, this side is rich, hearty and plentiful. The duo of flavor influences at CCBBQ might be perplexing to some, but I think I found the answer: I’ll have more, please!