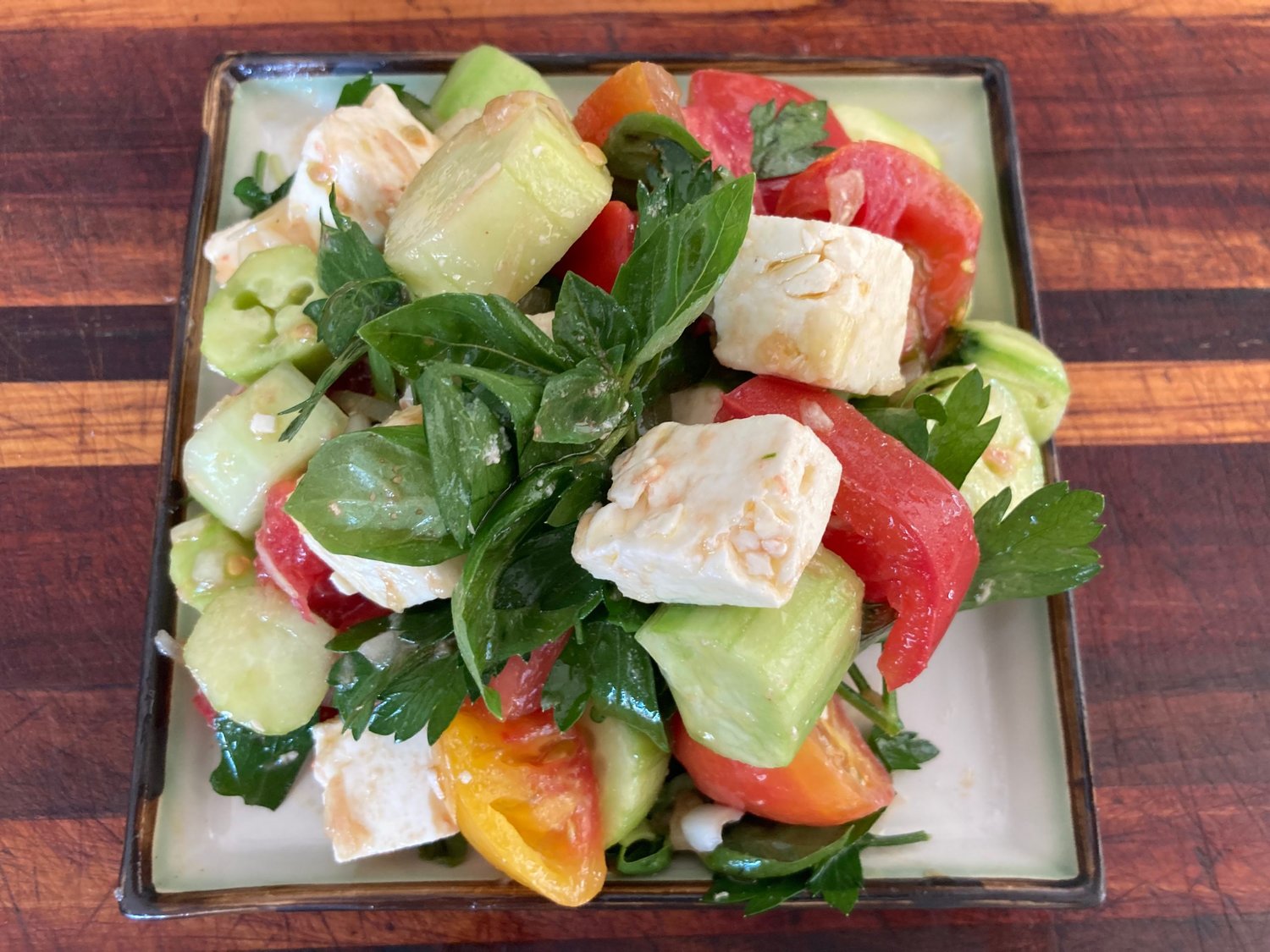 Ari LeVaux’s Greco-Roman Caprese. There is an eggplant under there. Truly!
Courtesy photo
Posted Thursday, August 25, 2022 12:00 am
Ari LeVaux

This time of year, it can be challenging to name a single item of produce that isn’t ripe. The earth has tilted squarely toward peak veg. It’s the gazpacho days of summer when anyone can effortlessly be a vegetarian. Even the most dedicated carnivores might unknowingly find themselves satisfied at the end of a meat-free meal. I get that way for a salad I call Greco Roman Caprese. By going public with such a name, I won’t be able to travel freely on the Island of Capri, where the iconic salad of tomato, basil and mozzarella is supposed to have originated. But I mean it with the utmost respect.

My capricious version employs feta cheese instead of mozzarella and adds cucumber, onion, garlic, lemon juice, vinegar and not just basil but also parsley and thyme. So, it’s truly a stretch to call this salad Caprese. But when the tomato, basil and cheese find each other, and that distinct flavor combination hits, the name just works.

Still, the ingredients change it. The most striking part of this salad is how the acids from the tomato juice, vinegar and lemon all combine. Redundancy is underrated. Adding multiple acid sources creates a more complex flavor than a single sour ingredient.

The relatively mild-mannered cucumber provides an aquatic stage so the stronger flavors can play out their drama. Those refreshing chunks are a peaceful counterpoint to the swirl of herbs, acids and spicy allium bulbs. The sharp and savory pizzazz of garlic and onion dance on the cheese and tomato while flavoring the acids with their spicy pungency. When stirred, and the fragrances combine, my whole body feels hungry for this earthy, savory combination. Each bite is a splashy step through a freshly watered garden.

The other day I made another batch, and the leftovers mainly were dressing, which I used to season baked eggplant. First, I sliced the eggplants in half (end-to-end) and cut a little off the bottom of each half, so they could sit flat with the cut sides facing up. I placed as many halves as possible into a deep oven pan. Then, with a short knife, I scored crosshatches on each cut face so they looked like pieces of graph paper. I topped each half with a sprinkle of salt, a spoonful of minced garlic and a pour of olive oil. Then I drenched everything in the leftover Greco-Roman dressing. After baking for two hours at 350, I let the eggplant cool. The next day, I shoveled my next batch of salad atop the room-temperature eggplant. Once again, I entered the meta-veg.

Remember, while vegetables are the star of this salad, it depends on the creamy, salty feta to pull the whole thing together. Don’t skimp on the cheese.

One large bunch of parsley, no stalks

One large bunch of basil, no stalks

One bunch of thyme, leaves only (optional)

3 lb – or more – tomatoes, cut into chunks about an inch on a side

1 pound sheep feta, cut into half-inch or so cubes

In a bowl, combine the onion, garlic, lemon juice, vinegar, salt and olive oil. Set this dressing aside while prepping the vegetables and cheese.

Add the cucumbers to a large bowl, followed by the tomatoes, parsley, basil leaves and feta. Add the dressing and lightly toss, lifting from the bottom. Be gentle: don’t crumble the feta, crush the tomatoes or mangle the herbs.

Serve immediately, and when the chunks are gone, save the dressing. Use it as a marinade or a sauce for baked eggplant or zucchini. Or drink it, like the Greco-Roman elixir it is.