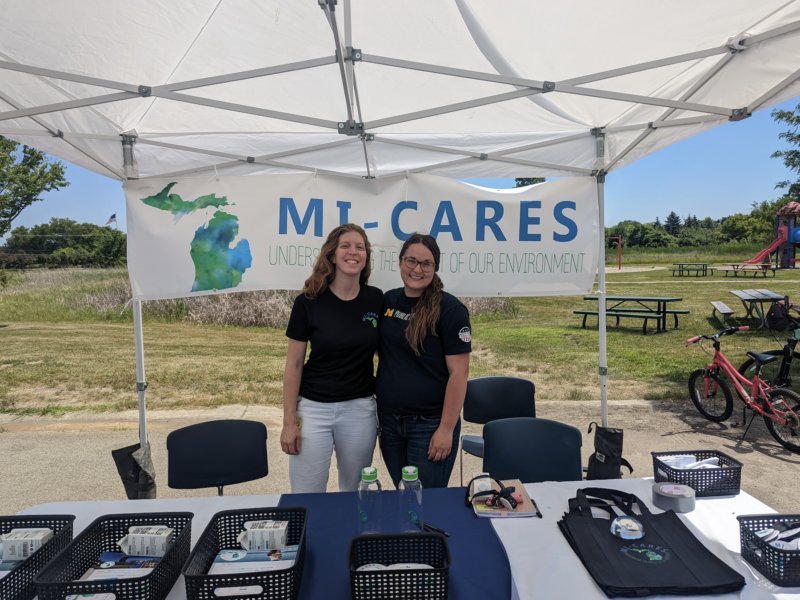 Sara Snyder is project director of the Michigan Cancer and Research on the Environment Study, or MI-CARES. The study is recruiting younger Michigan adults to study the link between the environment and cancer. Credit: University of Michigan.
Posted Monday, September 26, 2022 4:32 pm
By CAMERYN CASS

LANSING – A new University of Michigan study aims to understand how environmental exposures in Michigan contribute to cancer.

The Michigan Cancer and Research on the Environment Study, or MI-CARES, is largely motivated by Michigan’s history of toxic environmental exposures and environmental injustice, said Sara Snyder, the project director.

Environmental injustice refers to people who belong to groups that are discriminated against and are disproportionately exposed to contaminants and other health hazards.

June 1 marked the soft launch to test the website used to recruit candidates. People enroll every day, but the study’s full launch is projected for sometime this fall.

“Nothing like this has been done in the state of Michigan before, which is almost shocking if you know about the levels of environmental injustice that have taken place,” said Lilah Khoja, a doctoral student at the University of Michigan on the MI-CARES team.

“There isn’t a community in Michigan that hasn’t been impacted in some way by environmental injustice,” she said.

It dates back decades: the PBB contamination of dairy products in the 1970s, the Flint water crisis, industrial pollution in Detroit and now PFAS, or per- and polyfluoroalkyl substances, nicknamed “forever chemicals” because they don’t break down in the environment, Snyder said.

The project, funded by the National Cancer Institute and the University of Michigan, will track participants through annual questionnaires for at least six years, Snyder said.

They’ll be asked about employment and residential histories, race, ethnicity, major health and life events and overall lifestyle to gauge participant health and previous exposures to industrial chemicals or other contaminants, Snyder said.

Beyond cancer, the surveys might also shed light on how exposures to chemicals in the environment cause heart disease, asthma or even Alzheimer’s disease, said Dana Dolinoy, the principal investigator of biomarker evaluations for MI-CARES.

Such surveys have a proven track record. For instance, cancer rates are significantly higher in Flint compared to the rest of Genesee County and the state after lead contaminated the city’s water supply.

“My cousin, my aunt, my friend have all died of cancer,” said Arthur Woodson, a Flint resident and community activist. “People are dying in high numbers here of cancer.”

Such anecdotal reports can be reinforced by hard data produced by health studies from the Genesee County Health Department proving elevated cancer levels in the area.

A study recently published in JAMA Network Open found that 1 in 5 Flint residents have presumptive major depression and another 1 in 4 have presumptive post-traumatic stress disorder (PTSD).

“They fixed the water, but they didn’t fix the people,” Woodson said.

A large goal of MI-CARES is to give people access to data that will help them advocate for a cleaner environment and a healthier life, Khoja said.

“You can’t advocate for change if you don’t have the numbers to show that this is why it needs to change,” she said.

Cancer-centric studies like this one, whether linking it to smoking, a lack of physical activity or poor diet, played a role in a 29% drop in cancer death rates between 1991 and 2017, according to the American Cancer Society.

Researchers looked at what was going on in the state and narrowed the study’s focus to the most prominent of the 80,000 chemicals in the environment: exposure to metals, like lead, chemicals in personal care products, air pollution and PFAS, Dolinoy said.

Michigan has the highest known PFAS levels of any state.

To measure some contaminants like lead, participants from the six environmental injustice hotspots will send in blood and saliva. These measurements, called intermediate biomarkers, show if a past environmental exposure changed the epigenome – the instruction book telling genes how to behave – to make them more susceptible to cancer and other diseases, Dolinoy said.

The study focuses on a younger population so that researchers might recognize any diseases before they manifest, Dolinoy said.

“This gives us time to intervene and treat individuals, because when the disease is already on board, it’s really hard to reverse it,” she said.

There’s evidence, though, that relatively easier things like changes in lifestyle and diet might reverse changes to that epigenetic instruction book, especially early in life, Dolinoy said.

The hope is to inspire policy intervention with MI-CARES findings, forcing industry and other institutions responsible for poisoning the environment to change. That is a challenge that the health survey hopes to meet.

“It’s very difficult to translate some of this science in a way that will directly change the economics of a company,” Dolinoy said. “But studies like MI-CARES can provide a weight of evidence that shows our environment can negatively contribute to disease status.”

To apply to be part of the survey, visit https://micares.health and click “Join the Movement!” Applicants must be 25 to 44 years old and cancer-free.