Silver Bells in the City returns for a 38th year 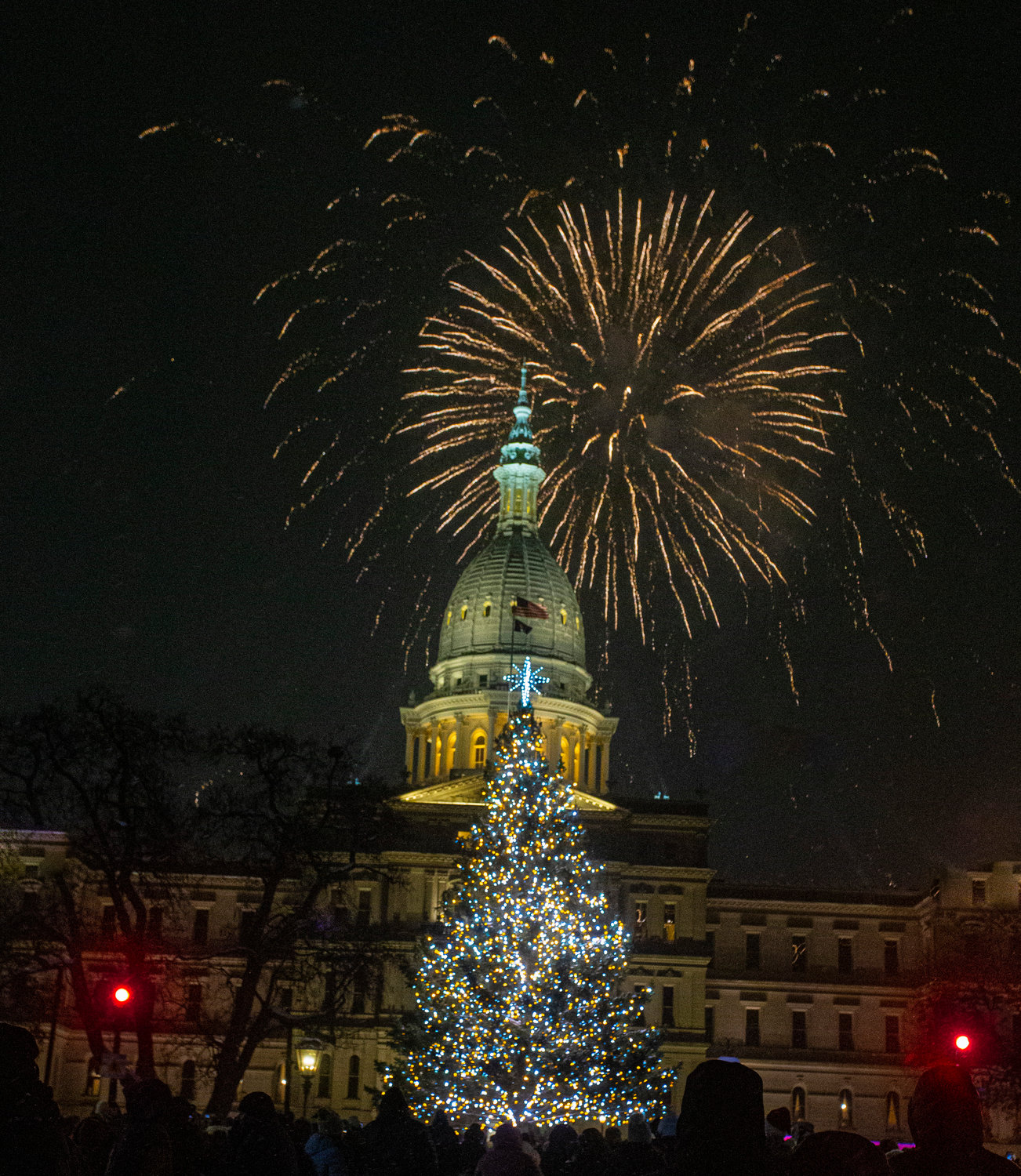 “I try to come every year. I used to come holding a bunch of little kids. Now they all grew up,” she said. “I just love the music, the bands and the parade. They’re always so good.” 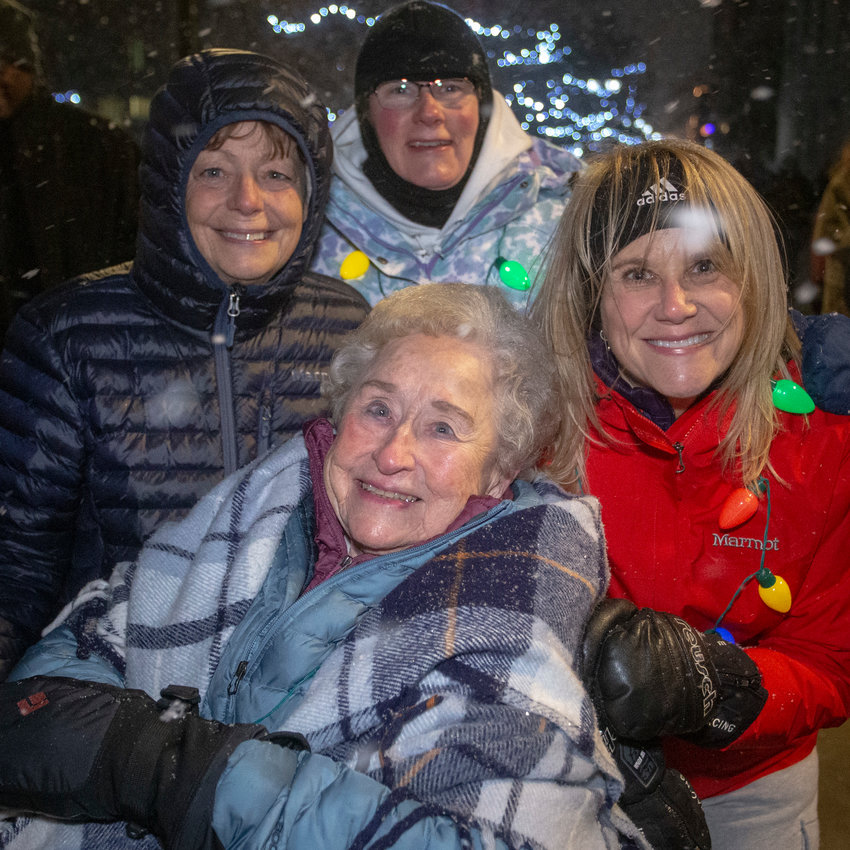 From her front-row seat on Capitol Avenue, Kreft chatted with a few of her 12 children while eagerly awaiting the start of the parade.

“I’ve never been across from the Capitol before. I’m usually on Washington Avenue, but it’s nice to see the Capitol.”

This year’s 38th Annual Silver Bells in the City celebration was jam-packed with festive events to get Michiganders in the holiday spirit. Event organizers said about 25,000 people attended. 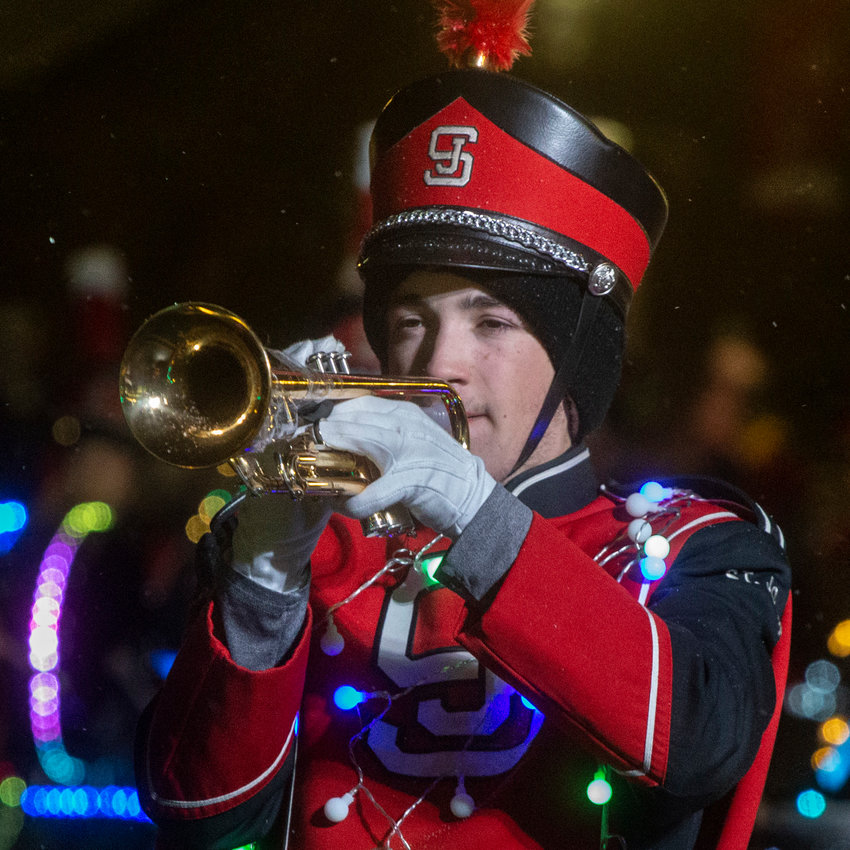 The Saint Johns High School Marching Band strung Christmas lights on instruments and themselves for the parade. 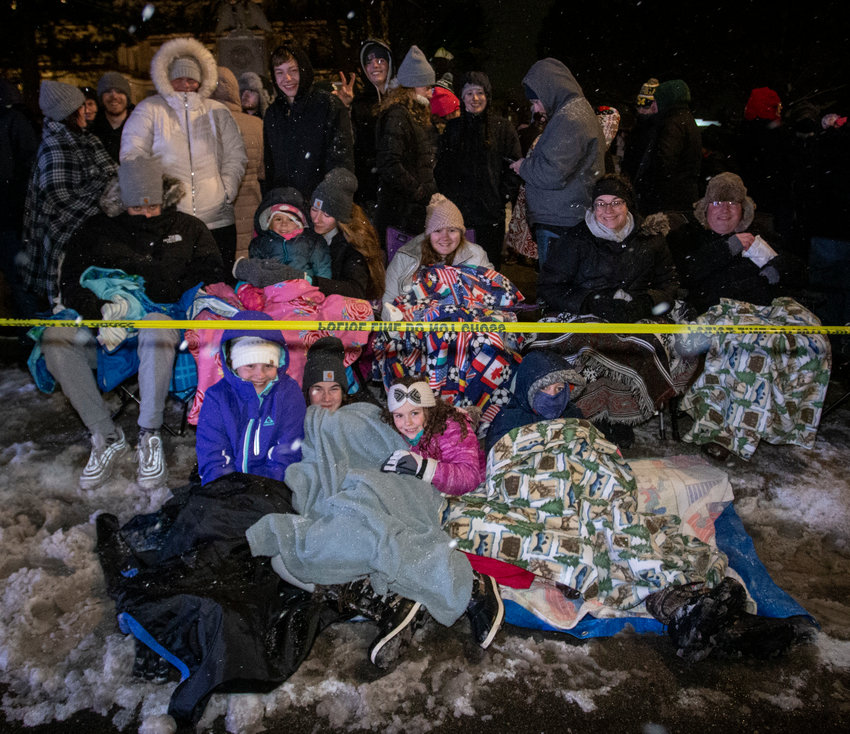 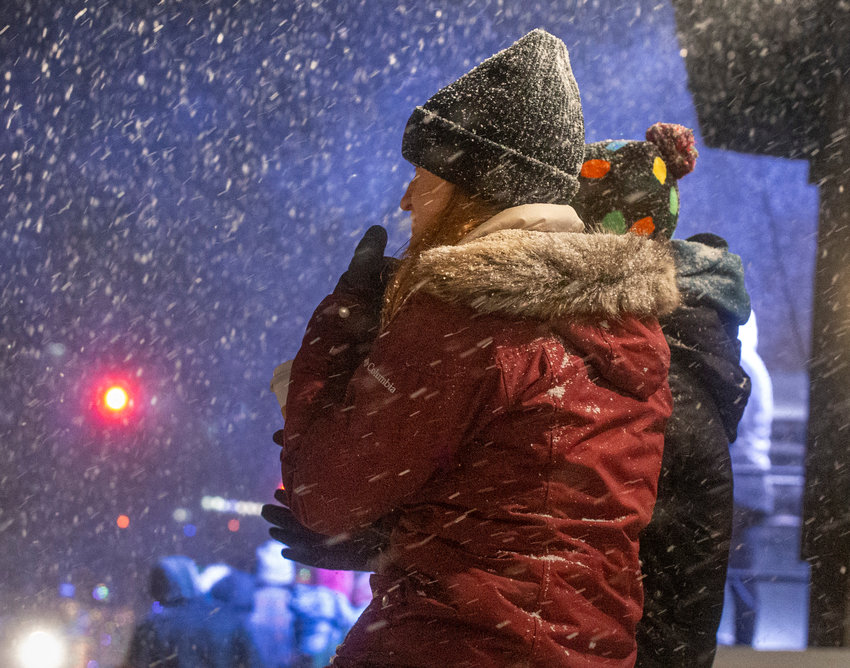 A large crowd packed downtown streets despite snow, temperatures in the mid-20s and wind gusts around 20 mph.

Next came a performance by American Idol alum Jacob Moran, who serenaded the crowd with a soulful a cappella performance of “Silent Night.”

Directly after was the drone show, which many visitors said was their favorite part of the night. Two hundred lighted drones lit up the sky over the Capitol to the beat of holiday music, creating images ranging from bells and Christmas trees to the University of Michigan “M” and Michigan State University “S” symbols.

“The drone lights were amazing,” said Lansing resident Tessa Owens. “I’ve never seen anything like that before. I didn’t know what to expect, but it was pretty sweet.” 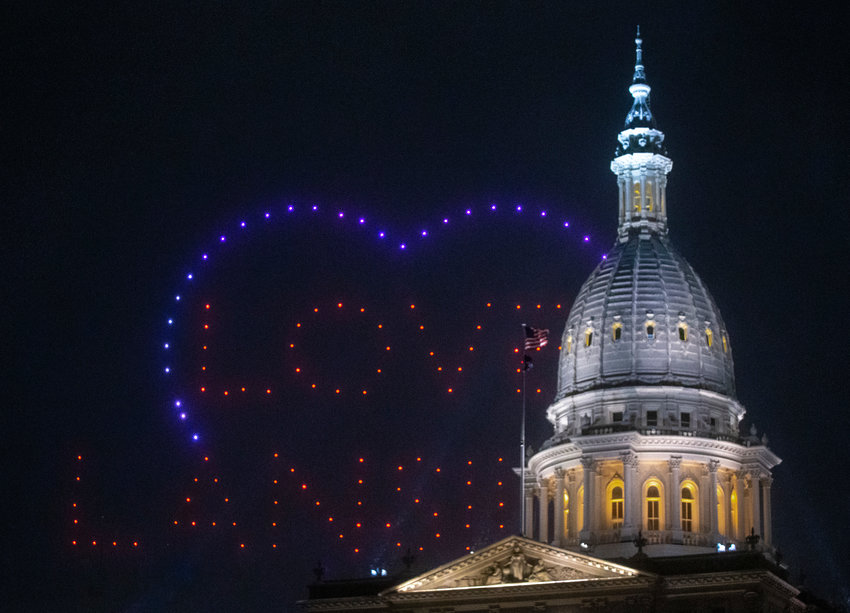 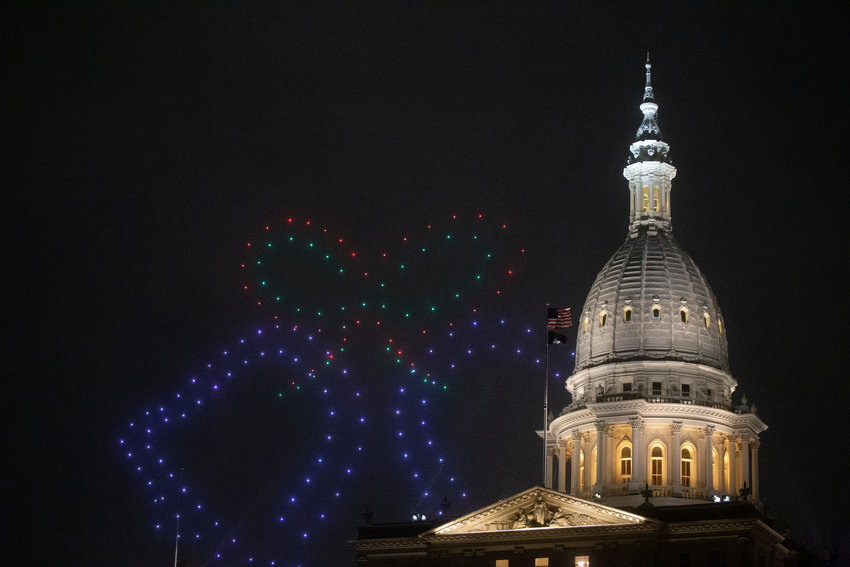 Two hundred lighted drones combined to create familiar images during the Firefly drone show.
Firefly Drone shows of Detroit handled all of the artwork, drone programming and airspace permissions, all customized for Lansing to hit each precise location in sync with the music.

Ending the night was the traditional fireworks display over the Capitol. Though you could see attendees shivering, and even hear a few griping about the cold, most toughed it out for just 10 more minutes.

Despite temperatures in the mid-20s, wind gusts up to 20 mph and some snow, the crowd filled several-block stretches of Capitol and Washington Avenues. However, numbers were down about 20,000 from previous years, event organizers said, perhaps because of the cold and concerns about COVID.

“This is the start of the holidays for Michigan,” said Tadele Wami of Haslett, who brought his four children. “It’s a good place to be with family and to celebrate the lighting of the tree.”

“It’s fun and entertaining and Christmas-themed. I really like it,” said Wami’s daughter Meklit.

Lansing’s Glen Erin Pipe Band delivered a performance of Scottish and Irish bagpipe music in the lobby of City Hall.

“We’ve been performing for Silver Bells for probably 10 or 15 years. This is kind of the start of the holidays for us,” said drum major David Price. “We’ve always played inside. The pipes do not play well in drastic temperature changes, especially when it’s this cold.”

The colder outside, the better, Price said.

“When the weather’s been really bad, we’ve had a lot of people come in. When it’s been really warm, people are outside,” Price said. “You never know what the turnout’s gonna be, but we’re here, and we’ll do our thing.”

Throughout the evening, the Silver Bells Village, a collection of local businesses selling everything from cotton candy and flavored popcorn to artisanal soaps and handmade jewelry, was bustling with hungry guests looking for a quick bite to eat 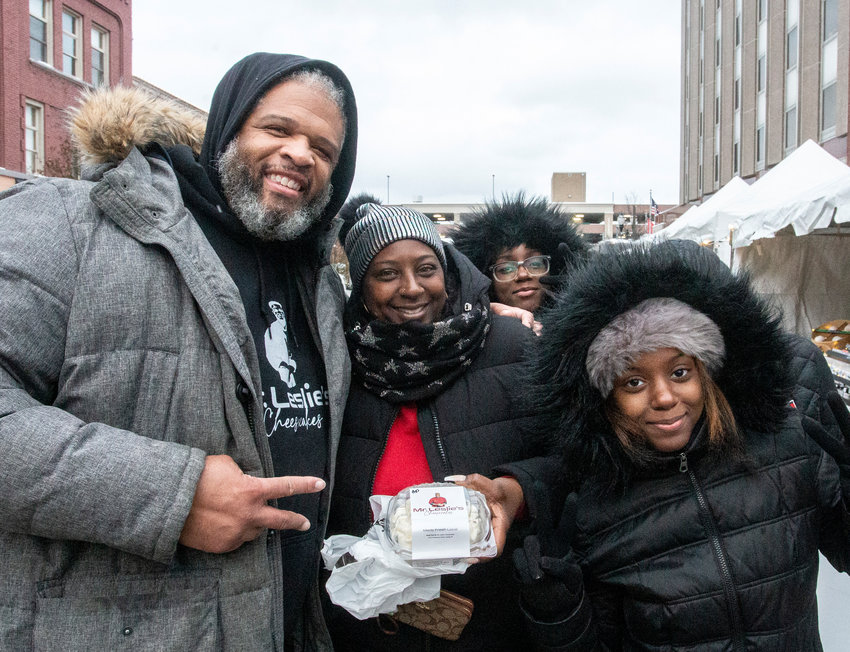 Marcus Leslie of Mr. Leslie’s Cheesecakes enlisted family members to help sell goodies at his booth in The Village.
.

Marcus Leslie, owner of Lansing-based Mr. Leslie’s Cheesecakes, was thrilled to be a part of The Village this year. Originally from Detroit, Silver Bells was one of the first events he attended with his family when he moved to Lansing.

Leslie made around 300 cheesecakes in preparation for the event, including apple pie, banana pudding, sweet potato and a variety pack.

“Our goal is really just to share my love of dessert — my favorite dessert, which is cheesecake — with everybody else, and hopefully everybody gets a smile like I do when I make it.”

One of the most popular booths was Cinnamon Nuts and More from Redford Township. The booth sold chocolates and candies, but the main feature was its Bavarian-style cinnamon roasted nuts.

“They like the smell, so it kind of draws them in,” said owner Barbara Torey. “It’s a nice event, nice area. It keeps us coming back.”

Overall, Silver Bells seemed to go off without a hitch. Albeit cold, attendees left happy with holiday cheer to spare.

“The atmosphere was nice. The live singing was unexpected, it’s like a miniature Times Square New Year,” said Lana Pasko of Holt. “I like the local businesses, and they made all the décor themselves. It was sweet.”

“We have kids, obviously, and they really like all the lights and the floats, and we’ve been doing it for years, so it’s kind of a tradition now,” said Lansing resident Justin Galer, who attended with his wife and two children. “We always like to do it every year to keep the tradition going, and maybe someday our kids will keep the tradition going themselves.” 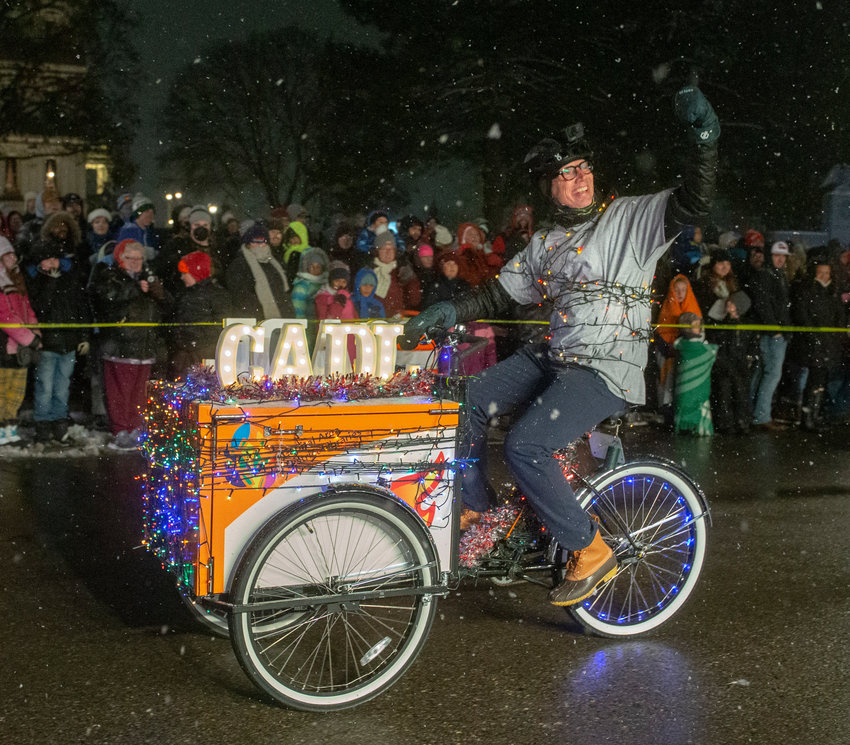 Scott Duinstra, executive director of the Capital Area District Library, had perhaps the most singular float in the Electric Light Parade.