Flash in the Pan: Fun with squeezed spinach 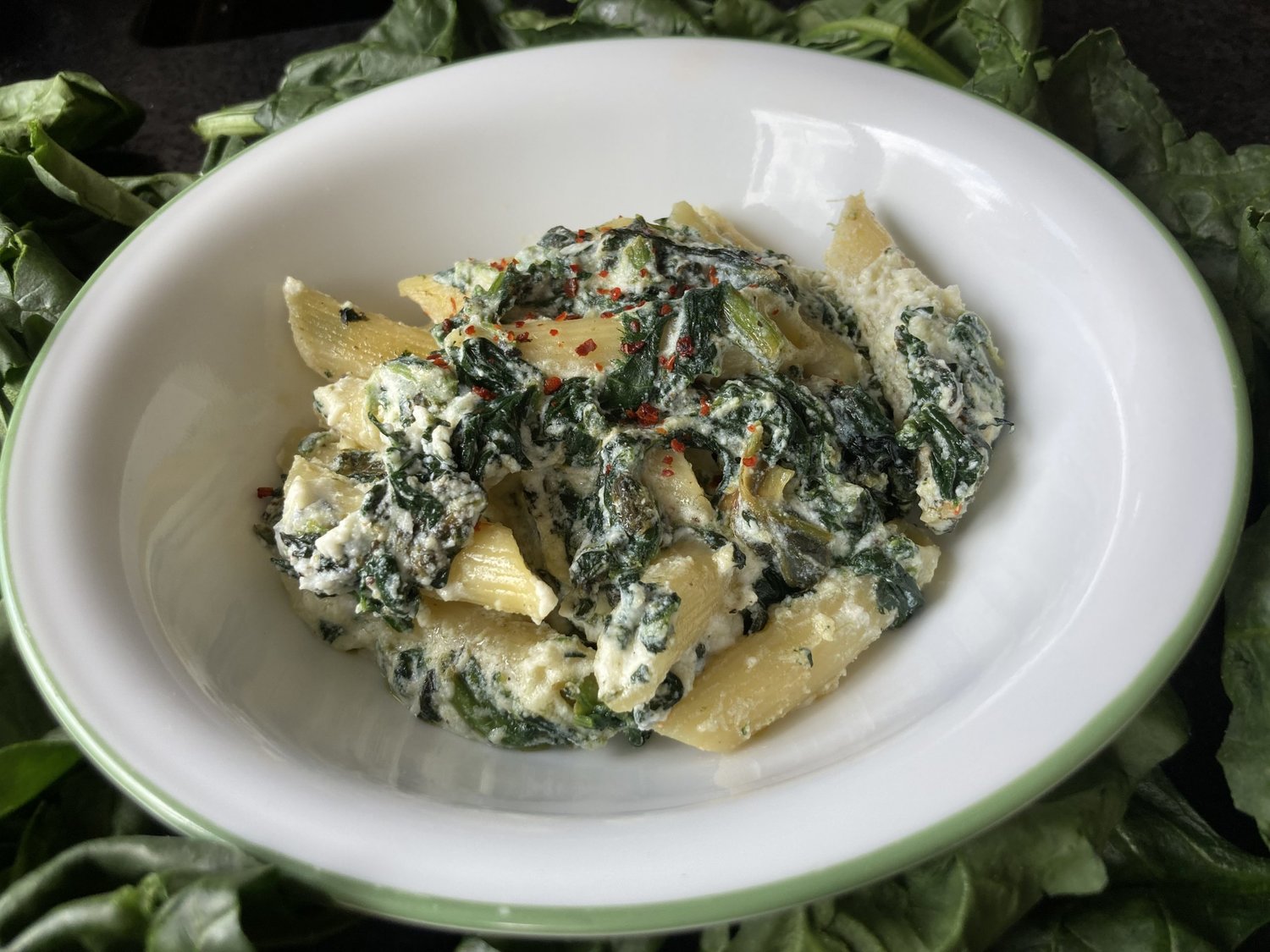 I love buying spinach at the farmers market in spring. There is great variety to be found, from dainty babies to long-stemmed beefsteaks. Each vendor has different looking spinach, and each farmer has a different way to cook it.

I got a good one recently from a farmer friend who told me about a Chinese-style spinach and noodle dish. She boils the spinach and then plunges it into cold water, as one does with vegetables. Next, she squeezes the spinach, pressing out all the water.

After following her lead, I was amazed by how small a ball of squeezed spinach you get from a large bunch of fresh. This increases the density of the spinach, such that a small amount can have a sizeable impact on flavor. Because late spring is the best time to gorge on spinach, I began using squeezed spinach in all of my and my friends’ favorite spinach dishes.

My spinach squeezing associate chops this extra-dense spinach and adds it to noodles in a broth flavored with soy sauce, chopped garlic, sesame oil and shrimp paste. She serves it with chile sauce and ranch dressing.

Ever since, I’ve been squeezing a lot of spinach. Especially the big, juicy leaves of full-grown plants. I don’t even bother with baby spinach, which lacks the gravitas, fiber and earthy flavor of mature spinach.

I decided to use chopped squeezed spinach to make a batch of sag paneer, the Indian dish of greens and cheese. Usually, I puree the cooked spinach in a blender, un-squeezed. But this time I used chopped squeezed, for a coarser version of sag paneer.  The paneer cheese is easy to make, providing it doesn’t all get eaten at the curds and whey stage.

So fun and soothing to eat, like an extra-thick broth. I tried some with nothing but chopped squeezed spinach, and a little salt. It was tasty, but not as all-around satisfying as the squeezed sag paneer I eventually made.

The most decadent way to eat squeezed spinach is with lots of ricotta cheese. I make this creamy spinach sauce with garlic, lemon and Romano cheese, and serve it over hollow noodles like penne. Thus far in my research, these lemon ricotta noodles are everybody’s favorite way to consume squeezed spinach.

This dish is bright, creamy, puffy and soft, yet balanced with pockets of dense green earthiness.

Juice and zest of ½ a lemon

Boil two gallons of salted water. If you have a pasta insert for your pot, use it. Add the spinach and boil for about four minutes. Remove the spinach and immediately plunge it in cold water to cool. Then place in a colander to drain. Add the pasta to the greenish boiling water and cook.

While the noodles boil, squeeze the spinach into as tight a ball as you can, pressing out all possible liquid. Place the spinach on a cutting board and chop it.

Saute half the garlic in the oil and butter. Scatter the spinach into the pan, add the lemon juice and zest, and give it a modest stir. Cook for a minute on medium, then add the noodles and the cheeses. Stir it all together. Season with salt and pepper. Dust with chile flakes and serve.

This rustic dish is full of flavor. Serve with jasmine or basmati rice.

To make the cheese, heat a gallon of milk. When it simmers, turn off the heat and stir in the yogurt. Let it sit for about half an hour, as the acid from the yogurt will trigger the formation of large, smooth curds that float in the surrounding, relatively thin whey. When it’s cool enough to work with, strain the curds in a metal strainer or with cheesecloth. Let them settle while you prepare the spinach.

Boil two gallons of salted water. Add the spinach to the boiling water for four minutes. Then strain and plunge in cold water. When it’s cool, strain and squeeze the spinach into a ball. Move it to a cutting board and chop it.

Slice the cheese into slabs, and cut the slabs into cubes. Heat the ghee in a pan and fry the cheese until golden brown on some if not all sides. Remove the cheese from the pan and set aside. Add the cumin, coriander, ginger and onion to the pan. Stir it all together. When the onion starts to caramelize and make water, add the garam masala and jalapeno peppers, if using.

When the onions have completely cooked down, add the spinach and cheese. Stir briefly, salt to taste, and serve with rice.

Birria tacos are everywhere in Lansing. These are some of the best

Hakurei: The caviar of turnips