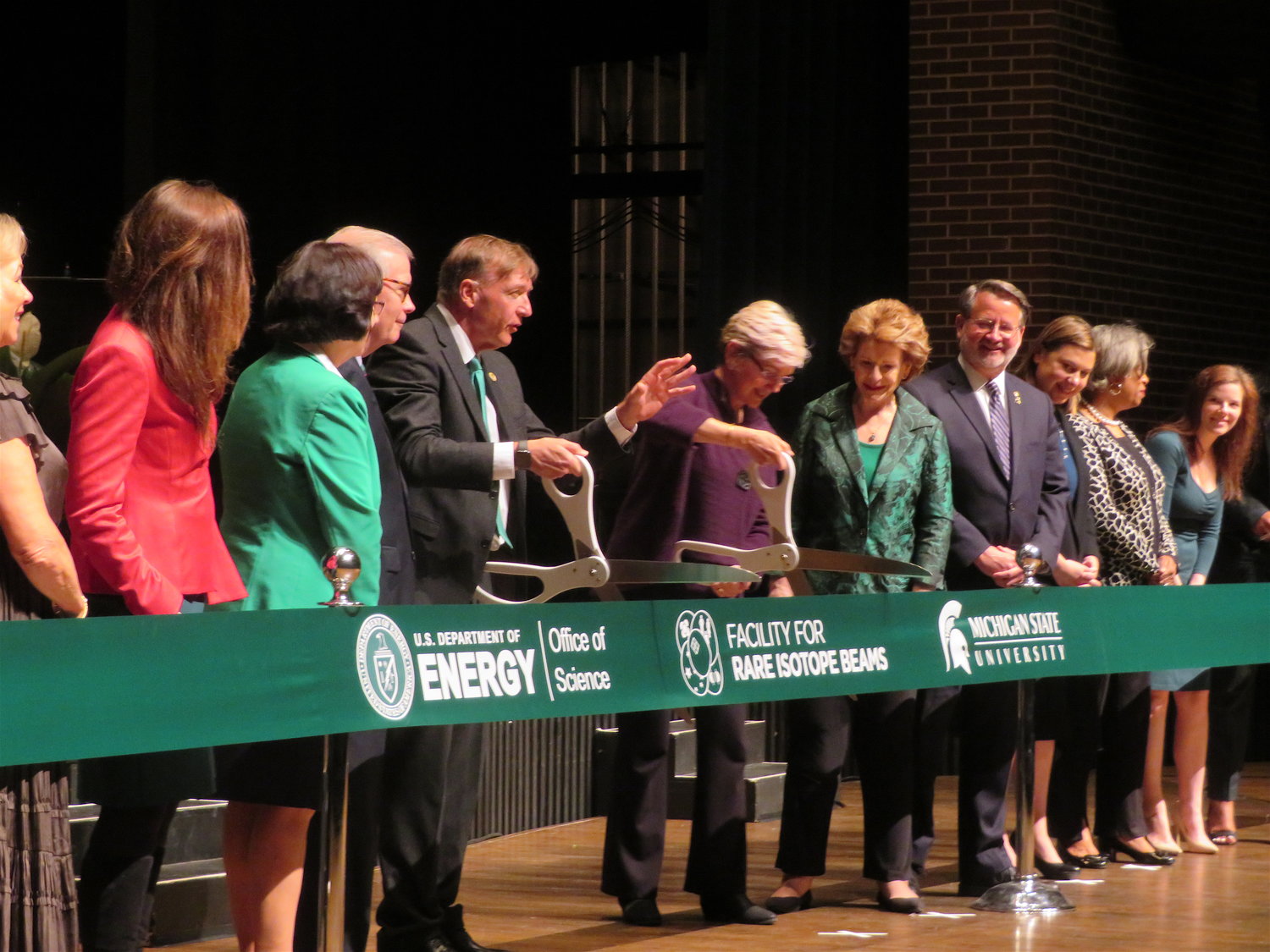 MONDAY, May 2 — All kinds of rare, high-level interactions took place today, both inside and outside of MSU’s Facility for Rare Isotope Beams at the ribbon cutting ceremony at the Wharton Center’s Great Hall marking the opening of user operations.

Whitmer had some fun with everyone’s struggle to grasp FRIB’s arcane physics.

“I could go on and on about harvesting rare isotopes, heavy ion beams and short-lived nuclei and other basic nuclear physics we talk about all the time at my dinner table every night. I won’t,” Whitmer said.

Touting FRIB as the ultimate emblem of MSU’s dynamism, the speakers predicted the facility would take the university, and the region, to an even higher electron shell.

Stanley traced the development of nuclear science at MSU, from the construction of the K-50 cyclotron in 1960 through the work of its successor lab, the National Superconducting Cyclotron Laboratory, all the way to FRIB.

“We have the nation’s top-ranked graduate nuclear physics program, granting one of every 10 of the nation’s nuclear science Ph.D.s,” Stanley declared. “There’s no better place to build this facility.”

Whitmer said FRIB would have a $4 billion impact on Michigan’s economy and be a “talent magnet that for some of the brightest minds in America and around the world.”

As governor, Granholm supported MSU’s bid to host FRIB, which many observers saw as a long shot, despite the university’s top-ranked graduate nuclear physics program. Granholm expressed her gratitude for a chance to cut the ribbon.

She recalled  2008, when the Energy Department chose MSU to be the home of FRIB, as a “brutal time” for Michigan, when the auto industry was on the ropes and the economy seemed to be in free fall. “It gave us this beam of hope that sliced through such a painful moment,” she said.

She brought her voice to an awed whisper to describe the work that will be carried out inside the facility.

“This idea that this massive series of pieces of equipment, the coils of metal, the huge technology and computers, this massive investment is researching the tiniest of particles,” she said. “It is mind-blowing.”

(For a look inside FRIB, pick up a copy of City Pulse Wednesday at nearly 400 locations. Or receive it in your emailbox by signing up for our newsletter at www.lansingcitypulse.com.)