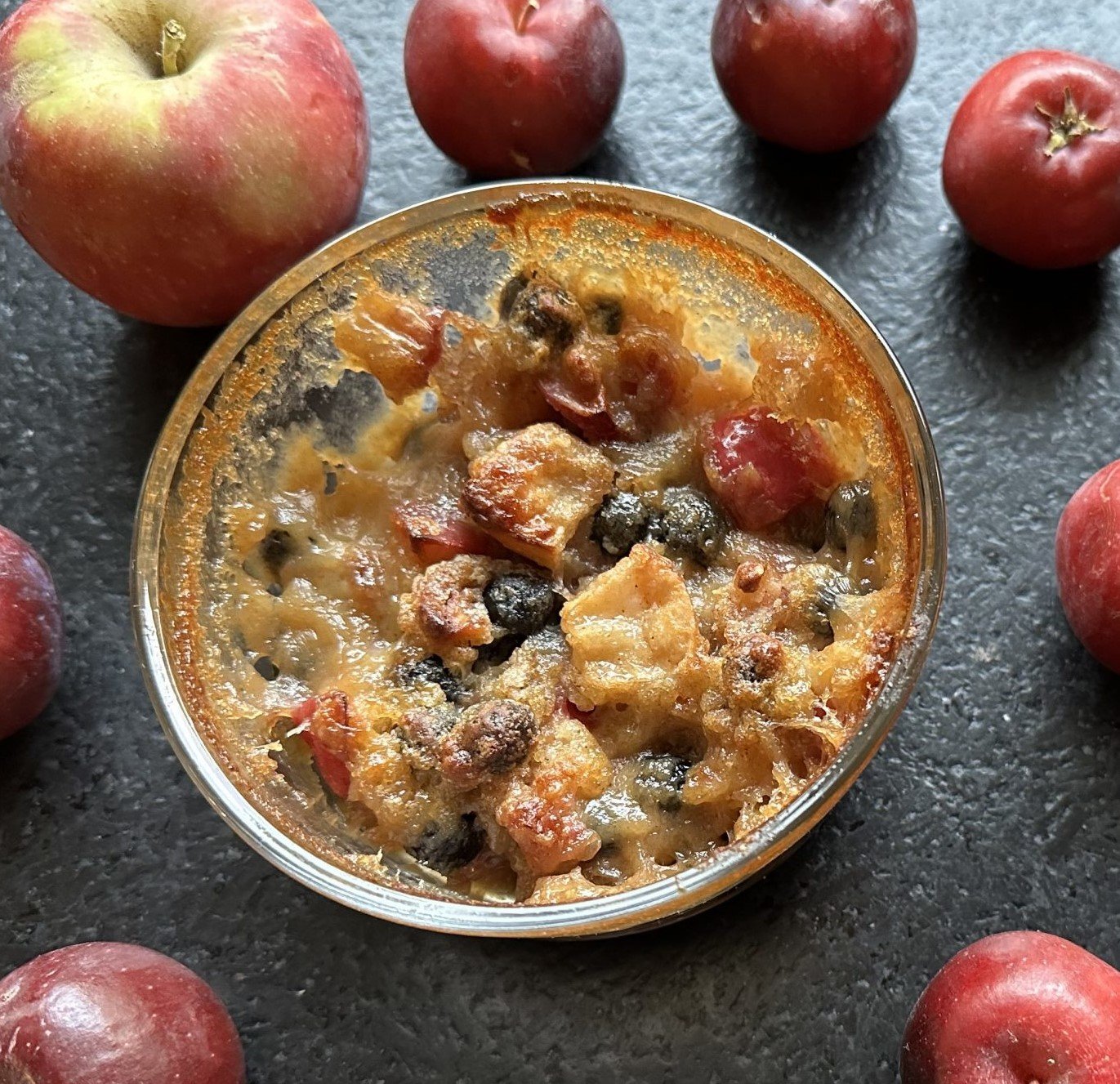 Boba apple pudding is “self-saucing,” a southern term that means the sauce is cooked with the dish, rather than being added at serving time.
Courtesy
Posted Thursday, November 24, 2022 12:01 am

Apples can be hard work to eat, despite being full of sweet juice. The tough skin requires energy to chew through, as does the rigid flesh. Hence the expression, “If you won’t eat an apple, you aren’t really hungry.”

Along the same lines, it is well-known that an apple cut into pieces is more appetizing than a whole apple, because cutting through the skin makes it less work to eat. One night, while debating what to make for dinner with my kids, I cut a quick apple to tide them over. Of course, they gobbled it down. I cut another. Same result. And another. Eventually, chopped apples became an easy dinner all by itself. And the boys weren’t even hungry for dessert.

If you take those cut pieces of apple and bake them with cinnamon, sugar, milk and vanilla pudding mix, the result is so delicious that it takes work not to eat it. Here, the apple is not just a litmus test for hunger, but a trigger.

My apple pudding contains boba pearls, rolled balls of tapioca starch commonly found in the popular beverage bubble tea. They have a texture that makes chewing fun. I like to use black boba pearls, which look like berries.

Like the peel of a raw apple, boba pearls require energy to chew. But unlike the stiff apple skin that discourages the chewer, boba has just the right amount of chewiness to keep you happily masticating, taking longer to eat the same amount. Were the pudding to merely melt in your mouth without a fight, you’d end up spending less time with it.

Perhaps I’m biased, but I find this apple pudding to be a better use of boba than in bubble tea, where the tapioca balls taste bland, are incongruous with the watery tea and do little more than clog the straw.  In this pudding, on the other hand, the boba is more useful and integrated, adding texture to the tapestry of the chunky pudding. Although it is baked, making this pudding does not qualify as baking, meaning anyone can do it, and the proportions need not be exact.

I have a friend with an orchard of unique crab apples. They are maroon-colored and deeply fragrant, with a flavor that reminds you that apples are in the rose family. Making the pudding with these apples was a fun change of pace from the batches of McIntosh-based pudding that I had been making previously. I then tried mixing both apple varieties in the same pudding, and that was the best version of all. I haven’t eaten much else for days, and I’m not complaining.

This pudding is “self-saucing,” a southern term that means the sauce is cooked with the dish, rather than being added at serving time. If you must serve it with anything, I suggest whipped cream.

Depending on where you live, finding boba pearls can be a little tricky. You might have to call around or get them online.

Add the boba and milk to a small pot and cook for 10-15 minutes on low heat, until the boba is silky and soft. Be careful not to scald the milk. When the boba is soft, let it stay soaking in the hot milk off the heat.

Preheat the oven to 375 degrees. In a medium-sized mixing bowl, combine the apples, flour sugar, pudding, cinnamon, baking powder and salt. Stir it all together. Add the boba and milk and stir it again.

Spoon your pudding into a buttered baking dish, making sure to leave at least an inch of space under the rim.

Once the pudding is in the dish, add the butter, remaining sugar and hot water to the mixing bowl and leave it until the butter melts. Then, stir it up and pour it over the pudding. The sauce should barely cover the pudding, so just a few apple chunks are sticking out. You want at least an inch of room to the edge.

For a 2-inch deep dish of pudding, bake for about 50 minutes until the liquid starts to dry up and the top looks brown and chewy. Allow it to cool, which will make it chewier. Serve with whipped cream.