How one artist dug deeper into acceptance 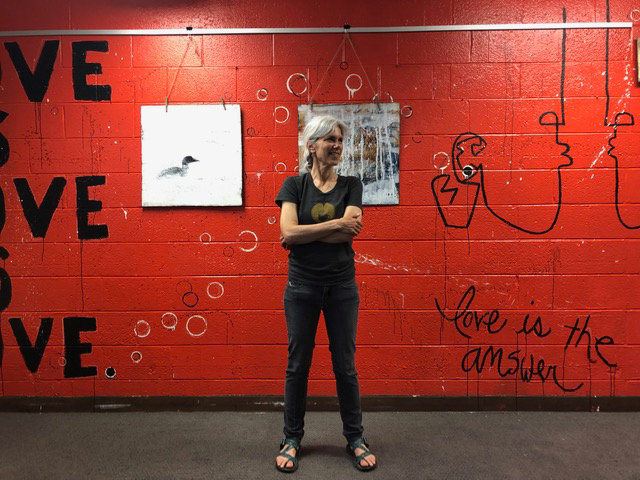 Artist Jessica Kovan said she wanted to capture the essences of "angst and love" in her installation.
Posted Thursday, June 13, 2019 11:54 am
Audrey Matusz

Last fall, when Chad Swan-Badgero, founder of the Peppermint Creek Theatre Co., asked her to create an exhibit synchronous with its production of “Indecent” — which opened Thursday —she knew she couldn’t say no. With years of experience assigning colors and textures to intangible feelings, Kovan, 56, wanted to go beyond retelling the true events that inspired the controversial play.

“Indecent” is inspired by the 1923 Broadway debut of Sholem Asch’s “God of Vengeance,” for which the entire cast was arrested for obscenity. The play was not only written in Yiddish, but it followed the love story of two Jewish women, marking it as a seminal work of Jewish culture to some, and blasphemy to others. As a straight, cis-woman who grew up in Lansing’s Jewish community, Kovan took the opportunity to dive deeper into the nation’s history of anti-Semitism, homophobia and fear.

Kovan said she started interviewing “queer Jewish women” from Lansing and across the U.S. in January. She spoke with two lesbian rabbis from out of state who explained the effects of the Holocaust that still are felt in many Jewish communities today.

“It’s all about fear,” Kovan said. “Speaking to the rabbis, I realized that part of that was the Holocaust, as well as the anti-Semitism.”

The artist was most fascinated to hear the women’s experiences of having a “double minority” status. Similarly, “Indecent” gives backstory to the cast from “God of Vengeance,” who after a successful European tour were vilified by fellow Jews and New York at large. As someone who identifies as “culturally Jewish,” the artist connected her love for the women she interviewed with her gratitude for Mother Nature.

To highlight the complexities of the identities portrayed on and off stage, the exhibit uses paper clippings, cardboard and acrylic paint to make multimedia collages. Framed on a cherry red wall she painted herself are smaller collages that speak to the unique ways birds choose to position themselves in nature — some are hidden among the foliage, others out and forthright. The metaphor demonstrates how human behavior is reflected by nature, but arguably points to a universal desire to be seen and heard.

“When I started working on cardboard, it was that sense of we dive in, we cut in and we also add on top,” Kovan said referring to the intention behind using recyclable materials. “I think we would be better off if nothing lasted forever. Also, we have to believe in change, so that we continue.”

In a press release, Kovan said the inspiration behind the exhibit’s title came while conducting interviews. The Hebrew phrase “hineini,” which translates to “behold, here I am,” came to mind while she listened to each of the women share their journeys to reclaiming their various identities — whether it be Jewish, rabbi, lesbian, mother or all four. During the interviews, Kovan had each woman complete “I AM” statements, a common practice used in art therapy, and incorporated their responses into the gallery wall.

In addition to collecting the personal narratives, Kovan consumed various forms of media, including Ria Brodell’s book “Butch Heroes.” The intersectional, feminist art-text compiles stories of unsung LGBTQ figures from the 15th through the 20th century. Kovan said Brodell’s ability to create visual components for such narratives was crucial to her when thinking of ways to showcase, rather than reinterpret, the “strength that these women have.” As stated on GLAAD’s website, an American LGBTQ organization, allies attributing “bravery” to individuals for identifying on the spectrum is counter-productive to the goal for normalization. Instead, Kovan created a space for the women to tell their own stories.

While two of Kovan’s siblings identify on the LGBTQ spectrum, Kovan said she was still “shocked” to learn about the history of homophobia within Judaism. However, her preparation for making “Hineni: Here I Am” allowed her to convey the generational effects of the Holocaust in the context of the LGBTQ community, which she sees as pertinent “especially in today’s political climate.”

“Hineni: Here I Am” Exhibition