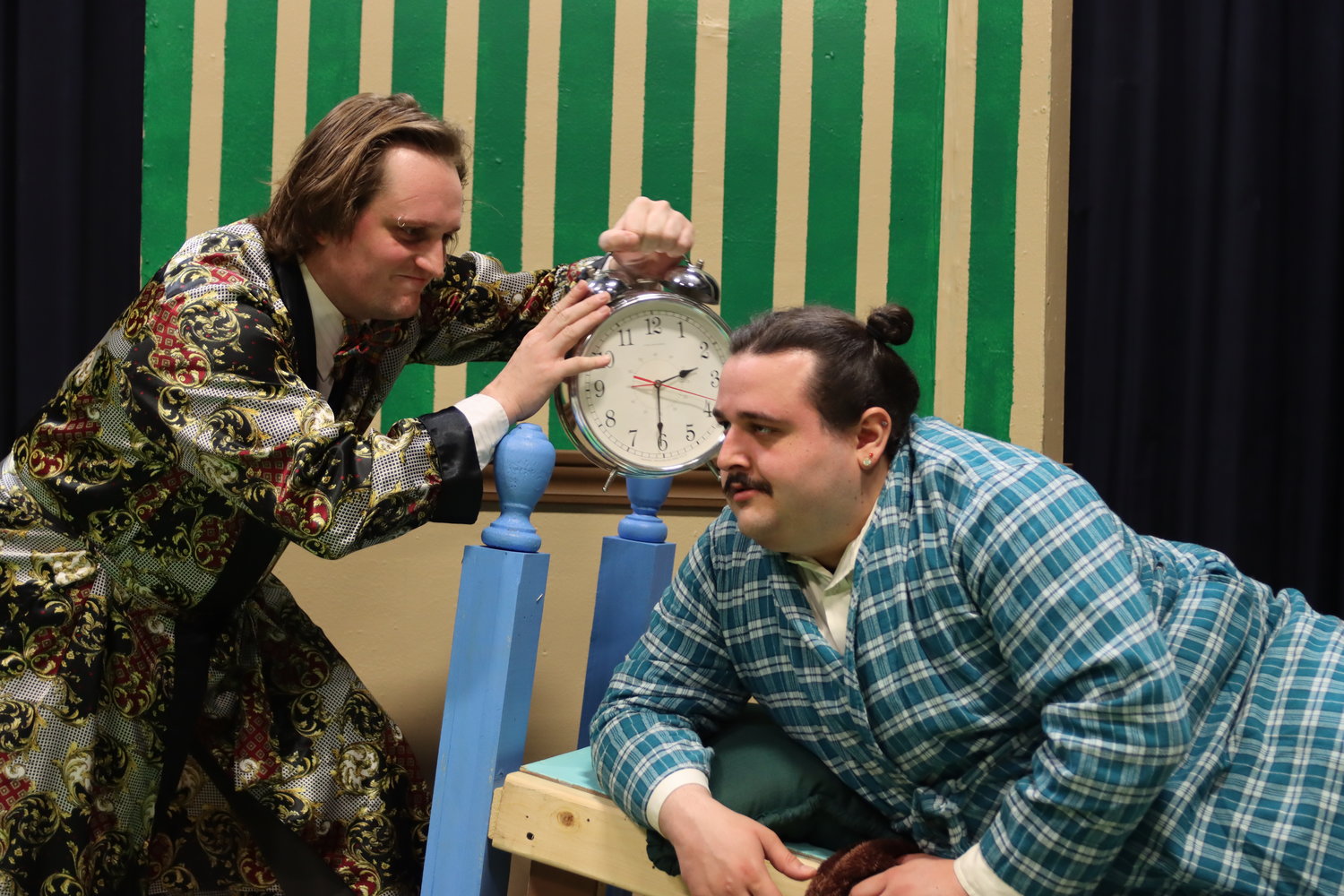 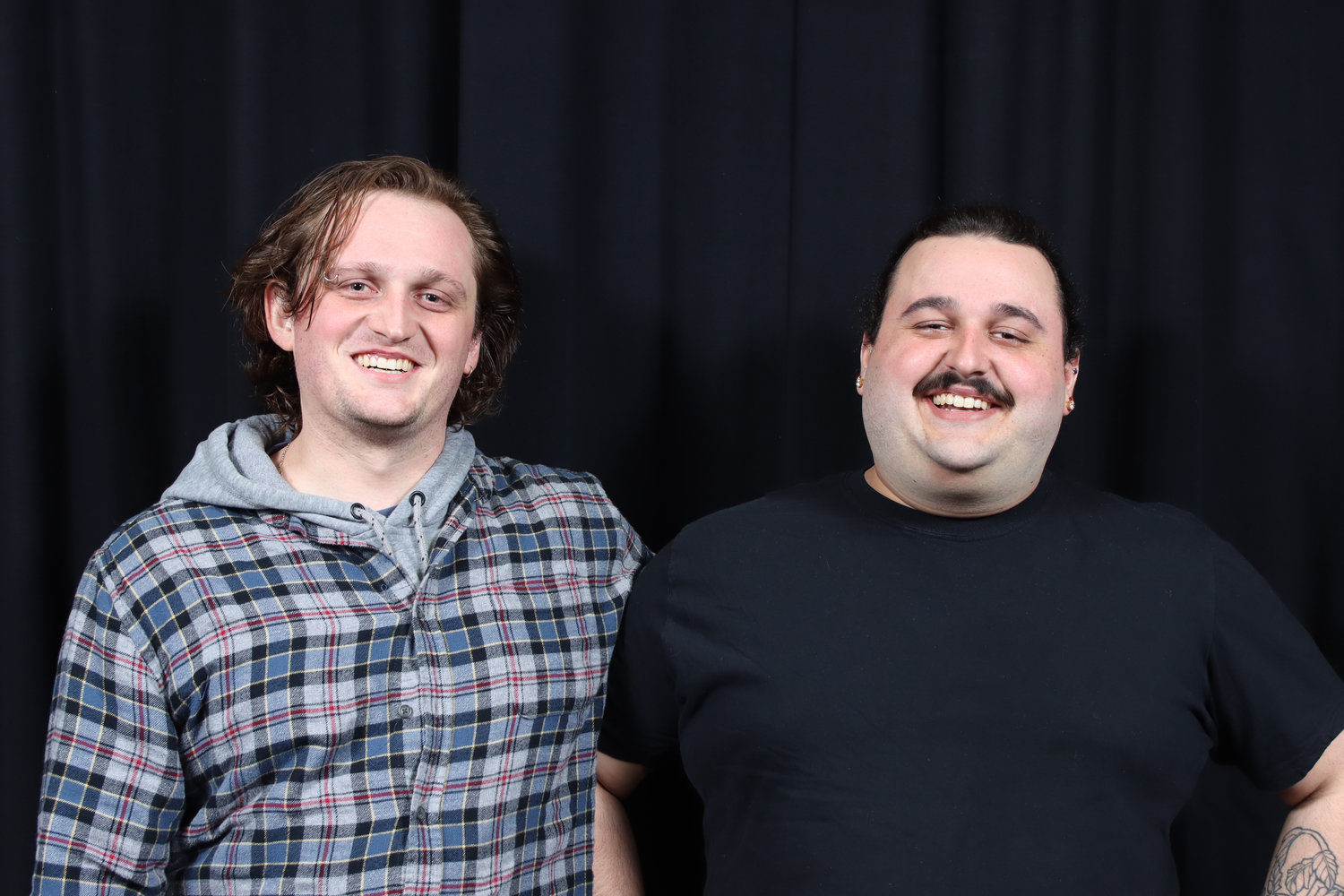 Brothers Connor (left) and Quinn Kelly play the iconic children’s book duo Frog and Toad in the Riverwalk Theatre’s production of “A Year with Frog and Toad.”
Ariniko Artistry
Posted Thursday, December 8, 2022 12:01 am

Riverwalk Theatre
228 Museum Drive, Lansing
“A Year with Frog and Toad”
Based on the beloved children’s books by Arnold Lobel, this whimsical musical tells the story of an entire year in the lives of Frog, the happy friend, and Toad, the curmudgeon.
Dec. 8-18
Thursdays: 7 p.m.
Fridays and Saturdays: 8 p.m.
Sundays: 2 p.m.
Special performance Wednesday, Dec. 14 at 7 p.m.
riverwalktheatre.com

Lebowsky Center
122 E. Main St., Owosso
“Holiday at Lebowsky”
Prepare for a holiday spectacular with singing, dancing and many stories of thanks and appreciation to the community that guided us through the ongoing pandemic.
Dec. 2, 3, 9, 10 at 8 p.m.
Dec. 3, 4, 10, 11 at 3 p.m.
lebowskycenter.com

Not only are Connor and Quinn Kelly brothers, they are performing alongside each other as the beloved childhood book characters and best friends Frog and Toad in the Riverwalk Theatre’s production of “A Year with Frog and Toad.”

Quinn, 26, plays Toad, the uptight, reserved and too-often-worried friend in the pair. In comparison, Frog, played by Connor, 28, is the high-energy, bounce-off-the-walls friend, always ready for an adventure.

The beloved duo was created from the mind of Arnold Lobel, who wrote and illustrated the book series. In a 2017 biography published by the Parents’ Choice Foundation, he said the two amphibians represented two sides of his own personality — a personality that fractured when he became gravely ill in the second grade. The experience isolated him and drove him to creative outlets for socializing, including drawing animals. In a way, his creativity saved his life.

The brothers both acknowledged that theater has had a similar impact on their lives. After each graduated from Waverly High School, they were aimless, unsure of what was next in life. Connor was starting down the road toward addiction.

“I was just trying to find a way to catch a buzz just to feel good most of the time,” he said.

Connor took a theater class at the recommendation of his mother. He credits retired Lansing Community College theater Professor Mary Matzke with helping him fall in love with theater.

“I think those things that make us feel good can be a replacement for direction,” he said. But after that first show with Matzke, Connor’s life was set in a new direction.

Quinn had the opportunity to see his older brother in his first performance at LCC, a small role (one line, spoken in Italian), and the spark lit a fire for him.

“As a younger brother seeing my older brother, it made me think I could do this,” Quinn said.

Quinn was addressing issues of his own at the time. He was completing probation for criminal charges from Eaton County and looking for a new direction as well.

The two have now shared the stage a number of times, including in LCC’s production of “The Government Inspector,” directed by Matzke. (Full disclosure, I played Osip in this production.)

The two were quickly becoming a force to be reckoned with on local stages. Then COVID-19 hit. Connor contracted the virus in 2021 and lost his voice for four months. He tried performing online, “but it just wasn’t the same.”

COVID couldn’t keep the duo down for long, however. The Brothers Kelly roared back onto local stages in separate musicals. Connor performed in “Cabaret” at LCC and Quinn in “Big Fish” at Riverwalk Theatre.

Connor wasn’t sold. He’d just completed “Cabaret” and had begun a new job as a bartender.

A reluctant Connor gave in to his brother and auditioned for the show. They were cast in the roles.

The brothers said they are having fun putting on the show and working with Tom Ferris, a longtime community theater director.

“He has this ability to bring people together that you wouldn’t expect,” said Quinn. “I really appreciate that.”

Connor and Quinn both said the show is fast-paced and light fare, with a 15-minute intermission.

“We apologize in advance that your kids will come away with these songs stuck in their heads,” Connor said. “They’re just fun, easy songs.”