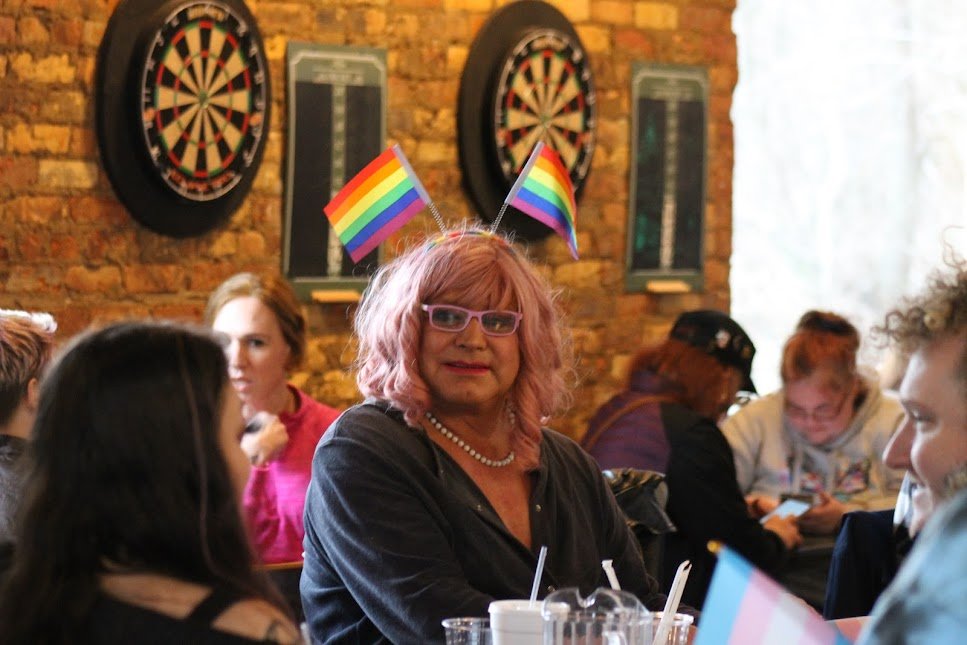 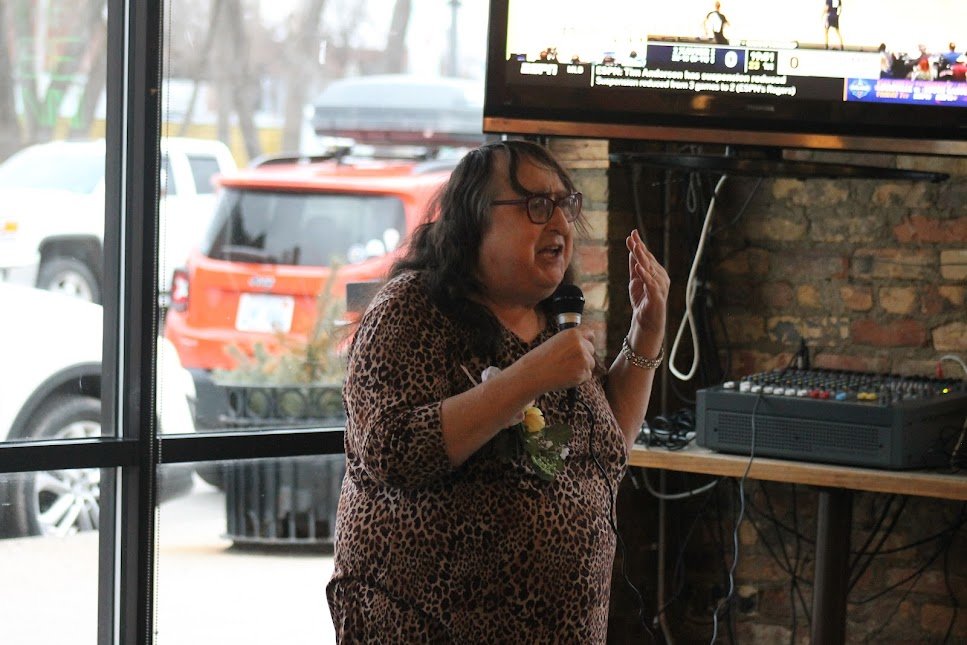 Rachel Crandall-Crocker, a former Lansing resident, leader of Transgender Michigan and founder of the International Transgender Day of Visibility, greets attendees at an impromptus celebration of the day at Sir Pizza in Lansing.
City Pulse/Todd Heywood 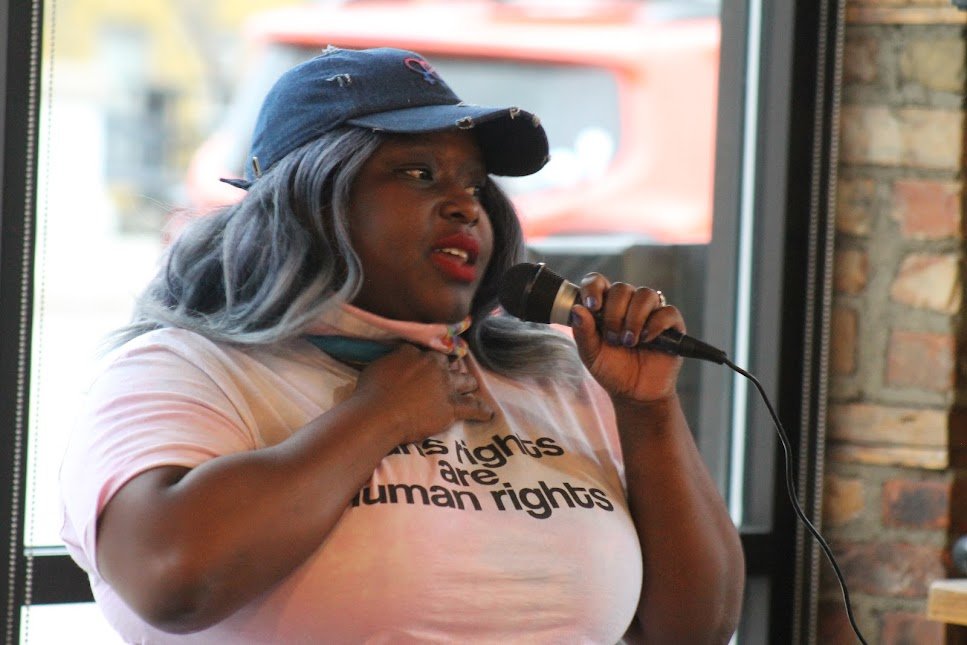 Rahjah Curtis-Evans, 34, is the CEO and co-founder of Wild Ferns Wellness located in the Frandor Shopping Center. The organization offers a host of support options for transgender and gender nonconforming persons.
City Pulse/Todd Heywood 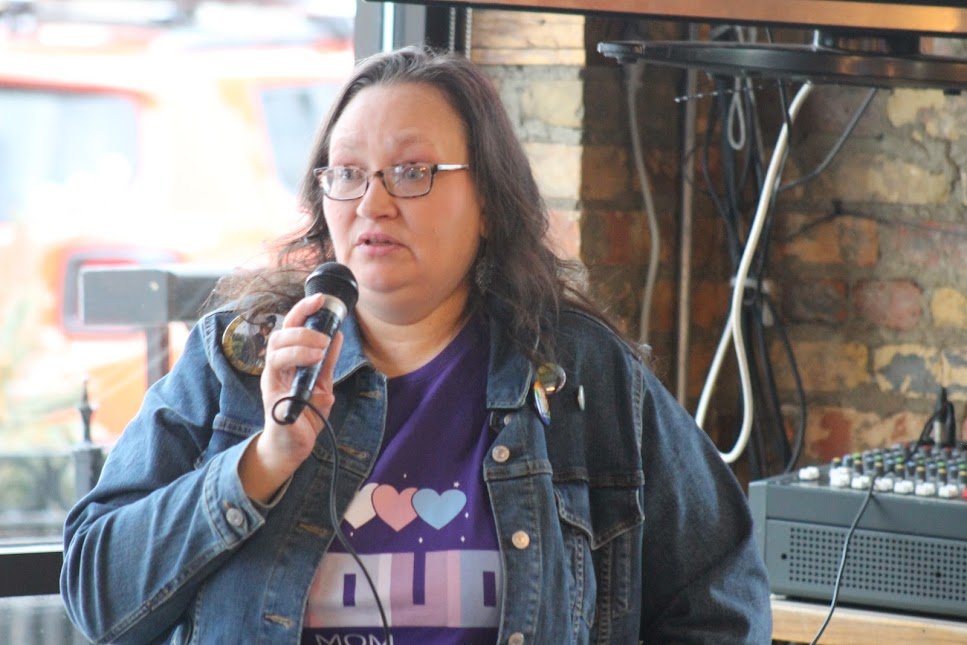 Kammie Mead, 51, promised her son Ken that she would fight and support him. Ken "lost his battle with depression" at age 17 in 2018, she said, but Mead is continuing to fight for her son and transgender people across the nation.
City Pulse/Todd Heywood
Posted Friday, April 1, 2022 10:30 am
Todd Heywood

FRIDAY, April 1 — The laughter and excited chatter of about 40 people created an atmosphere of safety for the transgender, nonbinary, gender non-conforming and intersex community last night at an impromptu celebration of the International Day of Transgender Visibility.

On hand at Sir Pizza in Old Town was the event's creator , former Lansing resident Rachel Crandall-Crocker, the founder of Transgender Michigan, who dreamt up the annual event in 2007.

Over the last 13 years, the International Day of Transgender Visibility has spread around the globe, she said — including in countries where being transgender is a criminal act, like Russia.

President Joe Biden also honored the day with a video to transgender Americans and allies, as well as hosting events with transgender youth. His administration also announced a series of initiatives to ease transition and honor gender diversity. That includes allowing individuals to use an “X” on their passports to identify their gender.

Joking with the crowd, Crandall-Crocker said of the day: “I was hoping that maybe a few people would like that."

"So, what do you think?” The group laughed and applauded.

Lansing mother Kammie Mead, 51, put the impromptu event together. Her son, Ken, died at age 17 after “losing his battle with depression,” she said. Ken came out to his mother when he was 14, and she honored and accepted him immediately, she said.

Ken was a student at Waverly High School when he died.

“I promised him I would fight for him, so here I am,” Mead said, noting that some other family members had been unaccepting of her son, which caused friction and familial pain.

A 2015 US Transgender Survey from the William Institute found that 81.7% of participants reported having seriously contemplated suicide at some point in their lives; 48.3%  had done so in the previous year. Those who experienced family rejection and other forms of discrimination were more likely to have considered or attempted suicide, the survey found.

Rahjah Curtis-Evans, 34, is the CEO of Wild Ferns Wellness in Frandor. The organization offers counseling services, as well as assistance in hair removal, hair care and styling, make up tutorials and more for the trans and gender nonconforming community. She said events like yesterday’s help a community that for the past year has been the target of political social dialog in attempts to control the medical care of transgender people, and prevent transgender athletes from competing as their identified gender, rather than the gender assigned to them at birth.

“It gives us a chance to meet up,” she said. “We need to have emotional support from our community.”