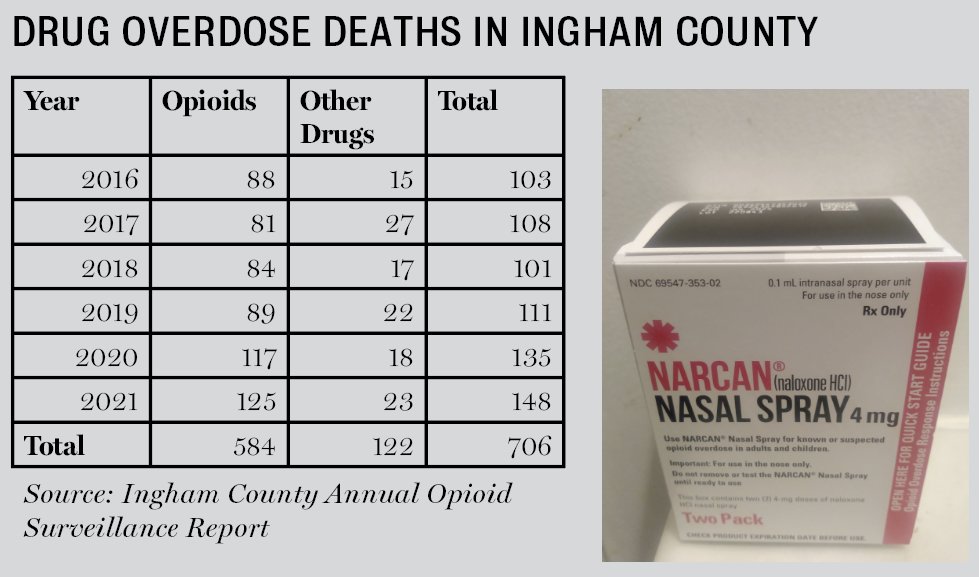 (Because of a reporting error, the organization Punks With Lunch was inaccurately called by another name in a previous version of this story.)

Overdose deaths from opioids in Ingham County appear to be declining to a pre-pandemic level.

Ingham County Health Officer Linda Vail said the decrease in deaths may be the result of individuals having more access to support in recovery as well as treatment options than when the state was shuttered to lessen the spread of COVID-19.

“It’s not that those options weren’t available, but there were barriers to accessing them,” she said. “I know a lot of groups moved to an online format, like Zoom, for peer support. But that’s just not the same as face-to-face peer support.”

With another respiratory pandemic possible, Vail acknowledged that overcoming the identified barriers that arose from COVID and impacted persons with substance use disorder would remain difficult.

The administration of naloxone by the Lansing Fire Department — the only local agency to report on its emergency use in Ingham County — also increased through the pandemic. In 2019, before COVID arrived in the state, naloxone was administered 330 times. In 2020, the number grew to 394, and in 2021 it hit 433.

Julia Miller of Punks With Lunch, an eastside organization that works to reduce harm from drug use, said those numbers are a blurry “snapshot” of the use of naloxone, not only because only one municipality is reporting its use but also because many are revived with it by friends, reversals likely to go unreported in official data.

“To get a more accurate account on overdoses, we’d have to take all the info into account, including stats from Rapid Response, EMTs and harm reduction facilities that track data,” Miller said. “Both deaths and non-fatal overdoses aren’t getting reported accurately, and the public isn’t aware.”

Miller said her organization distributes about 150 boxes of naloxone a week through its offices, a self-serve box and through street outreach. That’s during the warmer months.

“I expect in the winter time our numbers will drop somewhat due to less people coming out during cold weather,” Miller said. “We plan to address this by making ourselves more accessible and increasing our mobile unit/street outreach efforts.”

“It’s up to the public to be open and honest about it,” she said.

Punks Who Lunch also provides syringe exchange services, taking about 500 used needles every week. That doesn’t surprise Vail, who said there are likely still thousands more on the streets, but it’s an important step forward.

While needle exchanges have been criticized as “enabling” injection drug abuse, studies have found the programs reduce injection site infections, transmission of HIV and hepatitis and open a doorway to a potential recovery path. Miller and her volunteers spend time checking in with their clients on where their life is at. They also have conversations about how recovery is not necessarily always abstinence.

While the bureaucracy tries to address barriers, Miller said it is important for families of people who have died of an overdose to be transparent about the cause of death. The stigma and shame of someone dying as a result of an overdose and struggling with a substance use disorder is often an issue family and friends obscure when a person dies, she said.

“So many people lose a loved one and don’t mention what the cause of death was. Silence equals death,” Miller said. “When people aren’t aware of how their friends, family members or even a stranger passed, it’s asking for it to happen to someone else.”

Another issue is the lag time in finding out about an opioid death.

For example, as voters were hitting the polls Nov. 8, the staff, volunteers and residents of New Hope Shelter on Larch Street struggled to revive a 29-year-old resident from an overdose. The fast-acting opioid antagonist naloxone was administered. He was revived and rushed to Sparrow Hospital.

Later that day, he was released from the hospital and returned to the shelter. There, he overdosed again. This time, naloxone didn’t work and he died. Lansing Police have not released the man’s name.

Vail said she was unaware of the overdose death until contacted by City Pulse.

The reason? Unlike other conditions, opioid or suspected opioid overdose deaths are not reported to the health officer. The county relies on data obtained from the medical examiner’s office. That causes county records on opioid-related deaths to lag weeks or months behind what is actually happening on the street.

“There is not a method for reporting of overdose deaths within 24 hours of the death, as identifying a cause of death is a complex science,” Michigan Department for Health and Human Services spokesperson Lynn Sutfin wrote in an email. “Although there is value in exploring efforts to expedite the reporting of overdose deaths, the data reported needs to be accurate to be actionable. Ingham County, among others, participates in Swift Toxicology of Overdose Related Mortalities (STORM), which is a rapid toxicology testing program that operates out of Stryker School of Medicine, housed in Western Michigan University.”

STORM results are returned in about a week. It is a much broader toxicology test than would be done by a medical examiner, but Vail said the results can be limited.

“You may have someone who had a positive for cannabinoids, fentanyl and meth,” she said. “But there’s no way to determine if that is an accidental opioid use or if it is indicative of polydrug use, which is also not uncommon.”

In the last year, the STORM system has begun to identify xylazine in samples. It’s a potent animal sedative not approved for human use.

Vail said that in the last year, between one and seven samples per month from the county tested positive for xylazine. Metro Detroit and Grand Rapids are also seeing an increased trend in xylazine contamination in samples. The STORM system has been identifying this trend, Vail said.