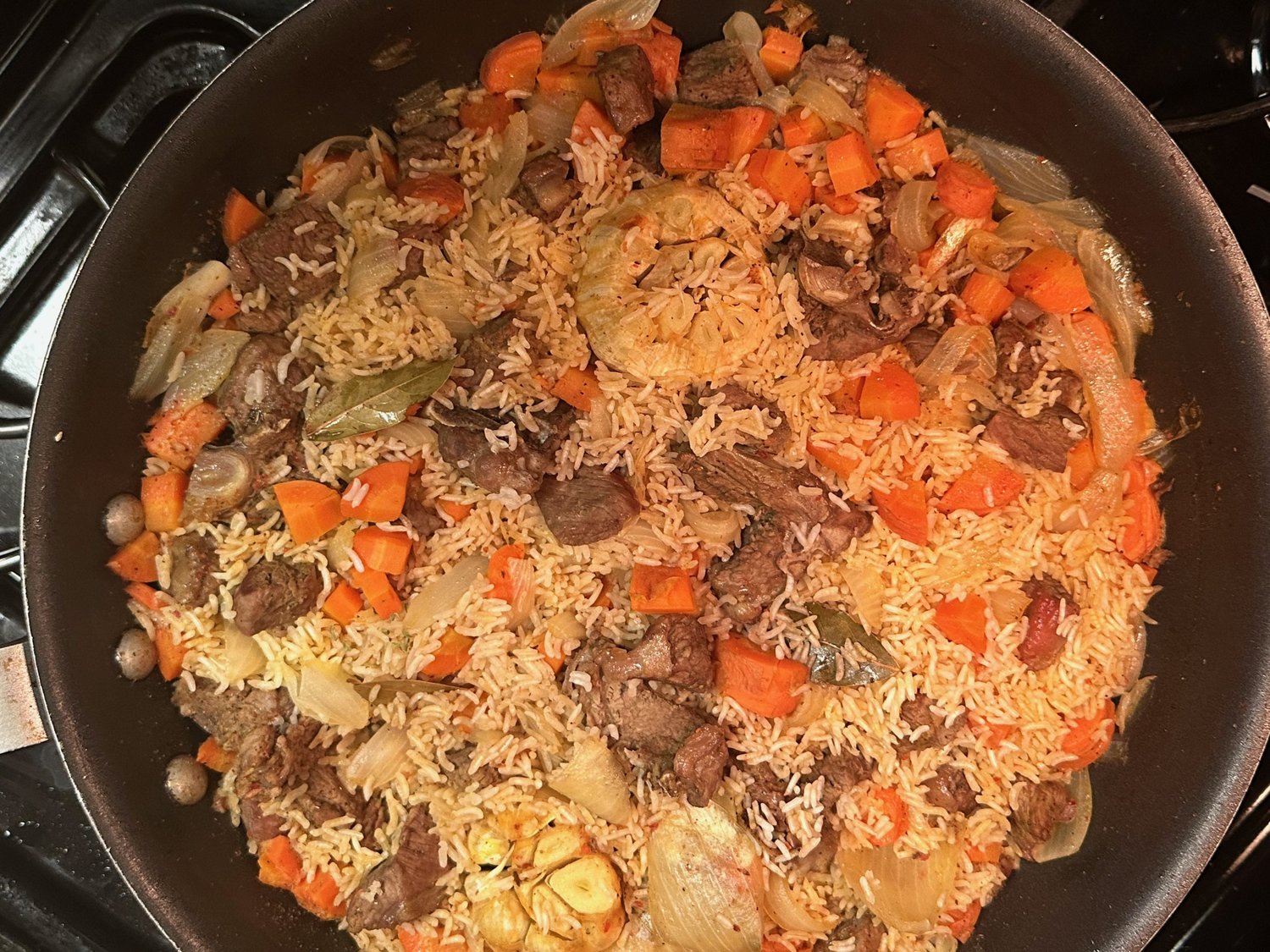 Plov is a hearty and meaty rice-based meal from Central Asia. The dish is widely considered the progenitor of rice pilaf and a cousin to paella. Native to present-day Uzbekistan, plov has spread throughout the former Soviet republic, where it varies by region. Some renditions include chickpeas. Azerbaijani plov contains dried fruit. Ukrainian plov is often made with chicken. But every version includes carrots, onions, garlic and some kind of meat. It’s traditionally prepared in a large, shallow pan called a kazan. A heavy wok, large frying pan or Dutch oven is probably the closest approximation that most of us have in the kitchen.

Legend has it that Alexander the Great commissioned the world’s first batch of plov as a way to feed his soldiers once in the morning, keeping them nourished and strong all day. Like many myths, it contains elements of truth. The dish does fill you up and keep you satisfied, and it can be made in batches large enough to feed an army. But I believe it has potential for peacemaking instead.

I first learned how to make plov at a dinner party hosted by a group of Uzbek businessmen who were visiting my hometown. They drank tea and murmured peacefully in the kitchen as they slowly prepared their dish, filling the house with the aroma of cumin, coriander, bay leaves, garlic and meat. It was a beautiful scene, but it was sullied by the sexism attached to the dish. The plov makers made it clear that its preparation is man’s work. I asked why women can’t make it.

“If a woman wants to eat plov,” one of them explained patiently, “she must order her husband or her brother to make it. That way, she can eat with pleasure. If you want to eat something that is prepared perfectly, you must have the master prepare it. Man is the master of plov.”

The party was full of nationals from many former Soviet countries with names ending in -stan, like Turkmenistan and Kyrgyzstan. These folks had strong opinions on the dish. One guest from Tajikistan told me she thought women wouldn’t add enough meat if they were in charge of the plov.

If we are going to mess around with gender stereotypes, it’s worth pointing out that most wars are planned and orchestrated by men. Given that reality, getting the menfolk to drink tea and make plov, rather than war, might not be the worst idea. If only Russian and Ukrainian diplomats could hang out together around a simmering kazan, talking quietly as the rice, meat and spices work their way toward a balance, maybe they could find a way toward a peaceful end to their conflict.  If men can make plov together, they can make peace together.

This recipe makes a basic plov. Consider it a point of departure for the creation of your own personal version. Feel free to im-plov-ise.

Lamb and mutton are the traditional meats of choice, because their strong flavors can stand up to the cumin, coriander and other spices. For this reason, I often use deer meat, which is similarly flavorful. Beef and chicken can make decent plovs, but the flavors of these renditions are less bold.

Brown the lamb in the olive oil in a wok, Dutch oven or large frying pan. While the meat browns, wash the rice in a bowl by filling it with water, stirring and dumping the water. Rinse and repeat until the water runs clear.

When the meat has browned, mix in the cumin, coriander, black pepper and salt. Add the carrots, onions, garlic heads, bay leaves and wine and stir it together. Sauté slowly, stirring occasionally, until the onions are translucent and the carrots are soft. Add the rice and mix it all together. Add about two cups of water, until there is about a half-inch or so covering the rice.

Cover the plov and simmer over medium heat until the rice is soft. Be ready to add more water if the pan dries out before the rice is fully cooked.

Let the dish rest for about 30 minutes with the lid on before serving. This lets the flavors settle and come to balance with one another and allows for the moisture to distribute itself evenly. As you serve it, break apart the garlic heads and distribute the soft cloves so every serving includes a couple.