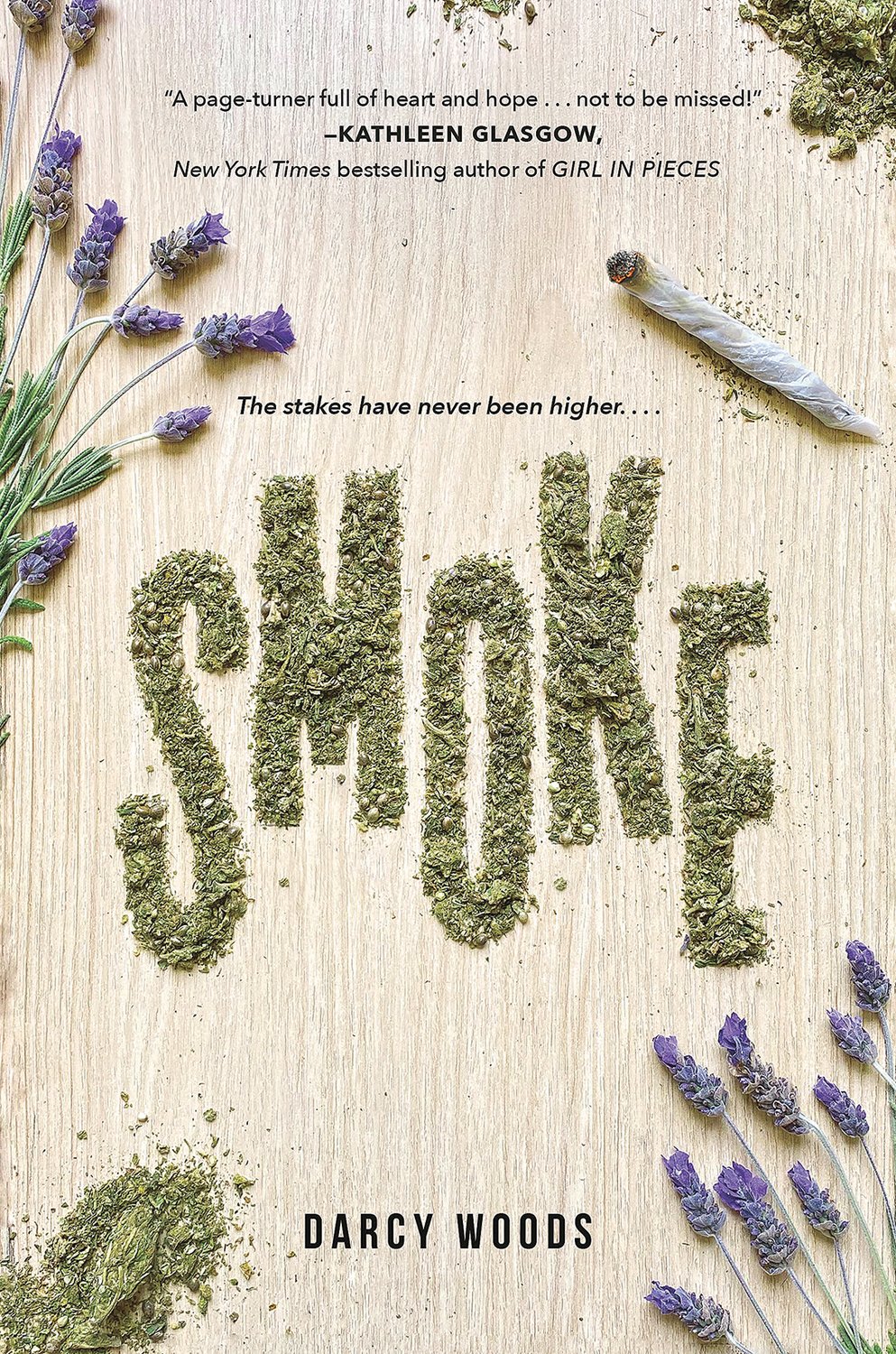 While growing up, most middle schoolers are told by their parents to wear their boots and not to forget their gloves. Williamston-based author Darcy Woods recalls her father adding one more piece of advice: “Don’t tell the dog shit.”

Once you see the creative dust jacket of Woods’ new young adult novel, “Smoke,” you’ll know she’s talking about McGruff the Crime Fighting Dog who visited elementary and middle school across the nation beginning in the ’80s as part of the national effort to deter crime and keep kids off drugs.

The title, “Smoke,” is spelled out with a ground-up marijuana leaf and a burning hand-rolled joint. Off to right, a tagline reads: “The stakes have never been higher.”

Woods new book follows 16-year-old Honor Augustine, who begins growing and selling weed to keep her family business from going under water. My no means is Augustine a stoner, rather; she is a successful high school student who goes about her daily life knowing her father grows and smokes weed to self-medicate against the effects of PTSD.

When faced with breaking the law or saving her family, Honor begins planting and cultivating in an era when growing and possession were still against the law, which makes for some stressful, dangerous times and offers many great thrills.

After receiving acclaim for her first young adult novel, Woods said she wanted to up her writing and try something a little trickier to handle.

“I was a big fan of the television series ‘Weeds.’ Everyone tells you, ‘Write what you know,’” Woods said.

Woods was diagnosed with PTSD and certainly knows a thing or two about marijuana and family dynamics.

“I’m a veteran; my dad’s a veteran and he’s been smoking and growing weed for 50 years,” Woods said. “I decided to tie the two together. I never knew my dad any differently. While writing, I was so mindful of not sensationalizing marijuana use.”

While researching the book, Woods spoke with a DEA agent and prosecutor, along with an industry “higher-up” at mega weed retailer Skymint to help get the details right. She also took a deep dive into how marijuana is grown its various strains and their impact.

“I wanted to give the readers all the information and describe the totality of the circumstances, but I didn’t want to go down the rabbit hole and bog down the book with too much detail,” she said. “The book focuses more on a father-daughter relationship, and the steps a good girl will take to keep her family together when their whole existence is at risk. It really puts a different spin on what it means to be a teen growing up.”

Subconsciously, telling her story must have been bouncing around in Woods’ head for some time. “I actually wrote a handwritten paper at 16 about the morality of marijuana, and made a case for legalizing it,” she said.

“In the book, I’m not encouraging teens to grow marijuana. Growing is a way to represent multi-generational trauma. The book is technically shelved as young adult, but adults can easily read it,” said Woods, who uses THC gummies to overcome insomnia due to her PTSD.

Woods said she grappled with the topic and the morality of marijuana consumption while writing the book. “It is still seen as illicit. For me, writing the book was equivalent to global streaking and putting it all out there,” she said.

While writing the book, Woods said she would check in with her dad about the content. “The book is so personal. I wanted to get it right,” she said.

Although not ready to totally abandon writing for young adult readers, Woods said she has an idea that would pivot her toward historical fiction. Woods is not quite ready to reveal the plotline, but it would spin off from some of the concepts in “Smoke.”

It will be easy for Woods to keep the plot line secret. After all, she went through grade school, middle school and high school keeping a secret that would’ve put her father in prison.

For certain, in recent years books for young adults have gotten more edgier, with covers that would make readers of “Lolita” blush. Very few, if any, of those young adult novels have a burning joint on the cover — Ole’ McGruff would not approve. Most of the young adult readers who will snag the book off the shelf will likely think it’s no big deal. One way or another, today’s teens and preteens see beyond the jacket.