Students win in competition of the 10 leading college groups 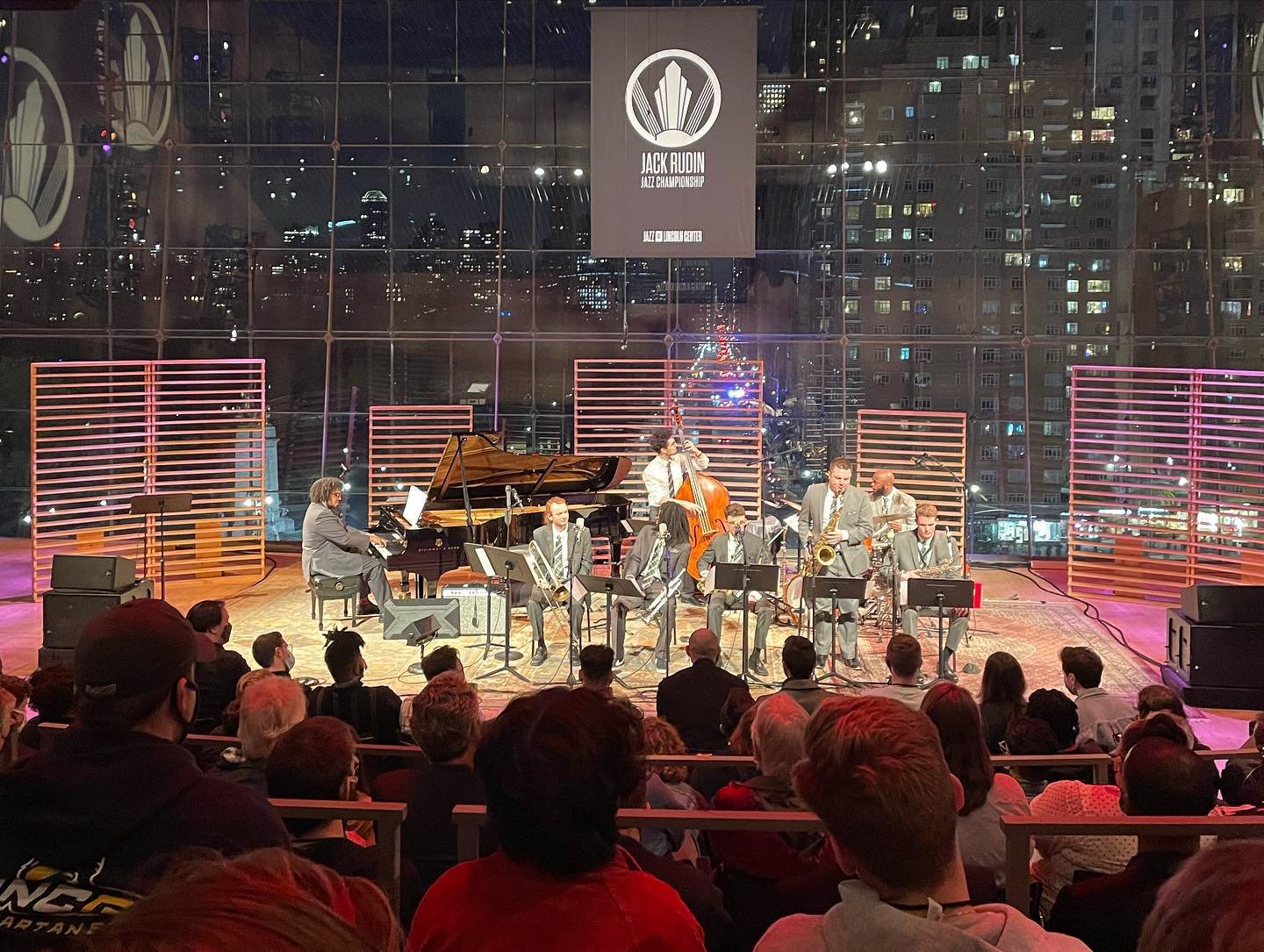 FRIDAY, April 22 — If Michigan State University’s Jazz Orchestra I had a theme this week, it would be Cole Porter’s “You’re the Top.”

After months of rehearsal and preparation, the Jazz Studies program’s leading ensemble took first place in the nation at the Jack Rudin Jazz Championship at Jazz at Lincoln Center Wednesday (April 20).

The competition pitted the nation’s 10 top college ensembles against each other, in the high-profile glitter of Manhattan’s premier jazz showcase, under the critical eye of a distinguished panel of judges: trumpeter-composer and director of Jazz at Lincoln Center Wynton Marsalis, drummer Jeff Hamilton, bassist Carlos Henriquez, pianist-composer Ayn Inserto and trumpeter Randy Brecker.

“They saw a lot of hard work pay off,” Whitaker said.

“We got to play eighth, so we heard almost all the groups, and that was kind of an advantage,” Whitaker said.

The competition was stiff. At 4 p.m., the judges announced that five bands, instead of the three originally planned, would return that night for the final round, including MSU.

“That was our swingingest tune, and we came to swing,” Whitaker said.

The first-place finish was the culmination of months of hard work and rehearsal that began before November 2021. The Lincoln Center competition was originally planned for January but was postponed because of the pandemic.

The extra time proved to be a boon. By Wednesday, the ensemble was a well-oiled jazz machine, fine-tuned by a busy year of rehearsals, classes and tours with visiting artists.

In mid-January, one of jazz’s legendary trumpeters, Charles Tolliver, took the MSU band up a steep mountain with an arrangement of saxophonist John Coltrane’s “Africa Brass.”

That put the ensemble in an exalted Coltrane mindset, Whitaker said, setting the stage for Wednesday’s triumph in Manhattan. One of the three pieces the MSU ensemble played at the semi-finals was an arrangement by Marsalis of Coltrane’s urgent, probing “Resolution,” from his masterpiece suite, “A Love Supreme.”

The performance required the whole band to channel Coltrane’s ecstatic saxophone cries in a series of explosive solos.

“I wanted to challenge the players, and it really made us stretch,” Whitaker said. “The trombones, trumpets, saxes all have to learn Coltrane’s solo to execute it. Imagine — you’re a trombone player and you have to learn a John Coltrane solo. It was a big challenge.”

“A couple people should have got one and didn’t get one, but that’s how competitions go,” a proud Whitaker was quick to add.

Whitaker said the MSU band learned a lot from finishing in third place at the first Jack Rudin competition, in 2020. (The 2021 competition was canceled because of the pandemic.)

“The judges told us the drummers were too loud, we overblew, we needed work on phrasing and on listening between sections — so many really good things,” he said. “I took down that list and made it our focus.”

When it comes to competition in music, Whitaker has a bifurcated philosophy.

“I like them because it forces you to commit to yourself, to do well,” he said. “If you’re mean-spirited and you’re going there just to win, your heart’s in the wrong place. It’s not about beating someone, it’s about learning and stretching.”

“You audition for a gig, there’s one bass player, one sax player,” he said. “You’re always competing whether you realize it or not.”

At the same time, he tells his students that when it comes to art, competition has no place.

“When it’s time to play, it’s not about winning or losing,” he said. “It’s about expressing what we came to express.”

The intense experience, from rehearsals to travel to being tested on the jazz world’s most conspicuous stage, only heightens the learning curve.

“When we’re going to a competition, we get way into the music,” Whitaker said. “We talk about the music and its history, in a way that we don’t otherwise.”

Taking top honors in 2022 would appear to leave the program with nowhere to go next year, but Whitaker doesn’t see it that way.

“Our goal will be to top our performance from this year,” he said “If people come up and play better than us, that’s good.”

Tricks to keep flowers fresh for your Valentine