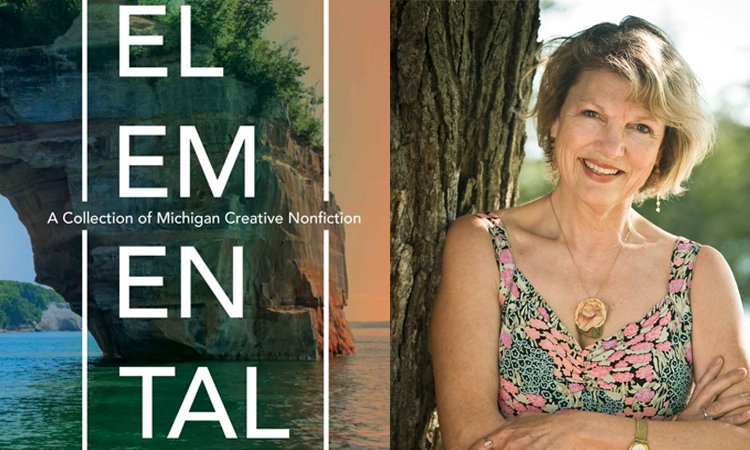 As a child, I recall visiting my uncle’s cottage near Whitefish Point nestled along the shores of Lake Superior. While my relatives played cards, I watched Canadian crime shows on a small black and white television set. Nothing like that was on TV back home.

As a Michigander, it is in our nature to piece together childhood memories when looking at a state map. Countless trips to lakes, historical sites and passing by vast crop fields. However, it is not often that one reflects on how these experiences connect us to the land. It takes a writer to break these rituals down to their atomic level in efforts to show the connection.

“Elemental” is an anthology about Michigan composed by 23 well-known local storytellers. Editor Anne-Marie Oomen, is a creative writing instructor at Interlochen College of Creative Arts and the Solstice MFA at Pine Manor College, Massachusetts.

Previously, Oomen has published collections of essays and poems about growing up in Michigan with titles such as “Love, Sex and 4H” and “The Lake Michigan Mermaid.” However, when she was approached by Wayne State Press to edit a collection of non-fiction essays she knew she wanted to do something different.

“I knew immediately I wanted to do something with the elements — that would be the concept drawing the essays together,” she said. “Earth, wind, fire and water would be the way we come to understand the vast differences we see in the state. Not only are we grounded, we are also united by the water and our closeness to water overrides everything.”

After being approached about the book, Oomen emailed 40 out of a “super long list” of potential writers. She received responses from authors including Benjamin Busch, Mardi Jo Link, Jerry Dennis, W. S. Penn, Rhoda Janzen and Davy Rothbart. Additionally, “Elemental” includes essays by Michael Steinberg, W. S. Penn and Marcia Aldrich, all of whom have taught writing at Michigan State University.

I caught up with Oomen by phone while she was on-site working with Safe Passage, a non-profit focused on education accessibility for youth in Guatemala City.

“I’ve never seen poverty like this,” she said, referring to the harsh realities of many children who leave school to work as dump scavengers.

While in Guatemala, Oomen is also researching the art of weaving by exploring how local cooperatives provide fair wages to artists preserving the creative tradition. Oomen’s essay, “Twelve Waves,” examines life as a series of reminders that her time on Earth is heavily dictated by natural elements.

In the essay, Oomen also recounts learning how to “walk on water” while using a paddle boat. In 2010, Oomen found herself in open waters paddling to save a woman experiencing advanced hypothermia.

Oomen talks about maintaining balance while pulling the woman onto her board and paddling back to shore. “I looked at the water, lifted it to my face, kissed its cold power, that would let me rescue one of its ownwho was me,”Oomen writes.

Many of the essays in “Elemental” are meditative, yet Oomen believes that all of them speak to what defines “Michigan literature.” One way she hopes to show this is by highlighting Michigan educators.

W.S. Penn is a professor of creative writing at Michigan State University and one of the founding members of the Native American Writer’s Circle. In his submission, “A Harvest Moon,” Penn recalls speaking to his granddaughter’s class about indigenous cultures in Michigan.

Penn’s writing contains an acerbic wit when grappling with his own “Indian” identity with all the usual trappings of living in a white-enforced reality. Including works like Penn’s offers one perspective on what it means to be a “Michigan native” and how biology is another element that can cause a disconnect from the land.

Finally, I turn to Michael Steinberg’s essay “From Manhattan to Leelanau: How Place Shapes Our Sense of Self.” Steinberg is the founding editor of the literary journal, “The Fourth Genre: Exploration in Nonfiction,” and has presented at several international and national writer’s conferences.

Steinberg laments his early days in Michigan when he couldn’t get a copy of The New York Times. The narrative traces his coming of age as a writer and revisits his youth in Rockaway Park and the streets of Greenwich Village.

“Elemental” was selected as one of Michigan’s 2019 Notable Books and will be feted at the Night for Notables celebration at the Library of Michigan in April.