The crew at the OneWheel meetup.
Chelsea Roberts 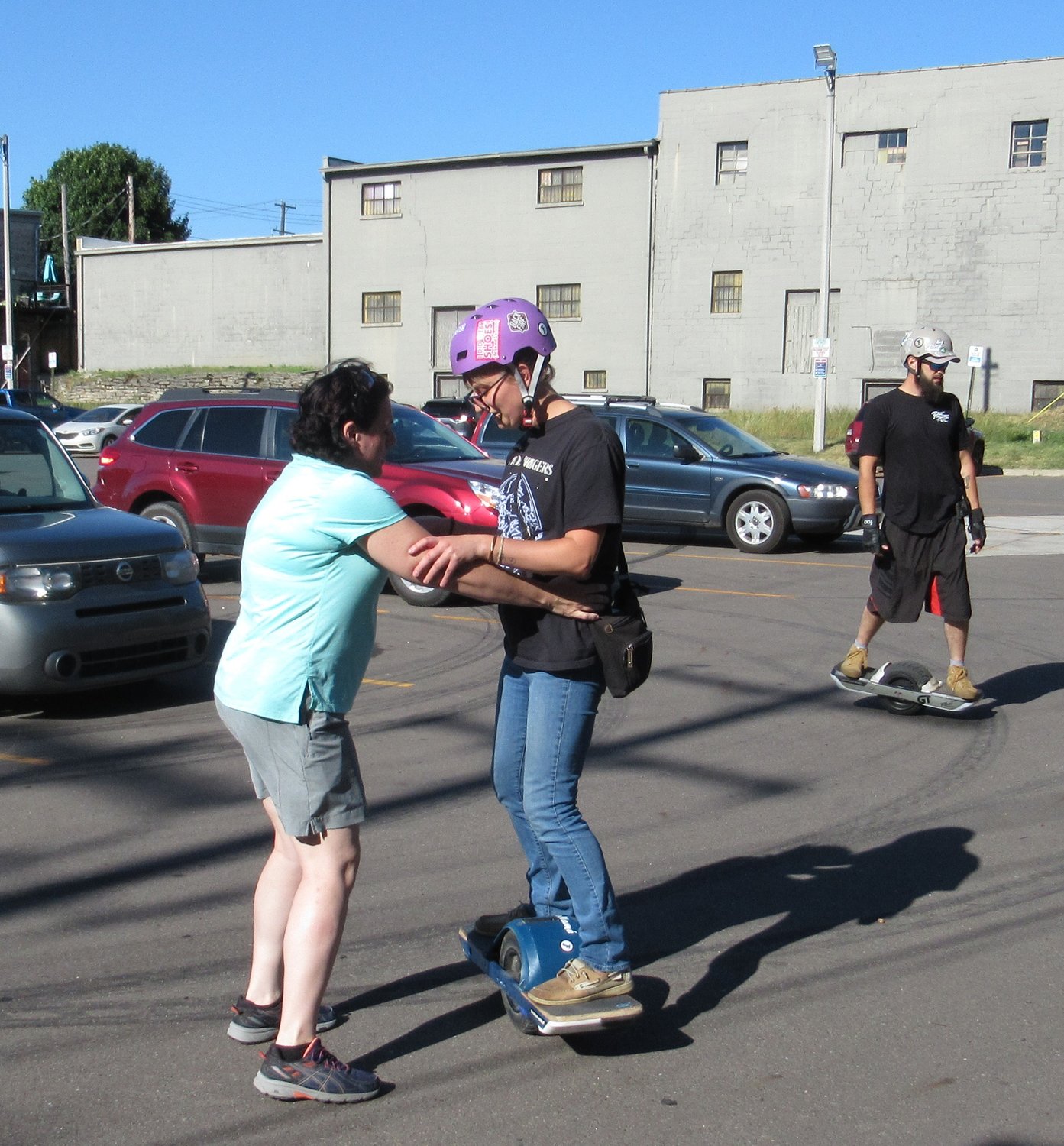 I used to get bored in Lansing but now I see it in a different way.”
Ahmed Aldhaheri
Chelsea Roberts

Members of Lansing’s most mesmerizing meetup coast into a parking lot on a Wednesday evening in Old Town. Men, women and children glide effortlessly on electric skateboards. Thirteen of over 100 group members have braved a hot day to ride the River Trail together.

Liz Ritchie’s first experience on a skateboard was only two years ago and it was … not rad.

But today, Ritchie is floating with confidence.

Ritchie is one of 5,000 people (according to a national Facebook group) who have taken up the “boardsport” in their mid-40s.

The group for this Facebook-organized meetup is called “OneWheel Lansing,” in reference to the OneWheel brand electric skateboards that most in the group are riding. All personal electric vehicles are welcome here, but they each have their nuances. A OneWheel is not an electric unicycle. On a unicycle, the rider faces in the direction they are moving. A OneWheel is not exactly an electric skateboard, which has four wheels and is often powered by a handheld remote. A OneWheel is a hybrid. To ride, you face to the side, like a skateboard, and one single large wheel in the middle spins to power you forward. The board responds to your weight shifting between your left and right foot.

Ritchie invited me to give it a try on her OneWheel.

I’ve ridden a skateboard before, so I hopped onto the 30lb deck with her help. OneWheels run on rechargeable batteries. They have a range of up to 20 miles and reach a top speed of 25 mph. Ritchie told me to lean forward, onto my right foot, and I was delighted when the board started moving. It’s surprisingly smooth.

Rusty Allswede described his first time on a OneWheel like this: “When you get on it, you can make it go almost immediately, you just ride it. But you don’t know how you’re doing it yet.” The boards are sophisticated pieces of technology that are pleasantly intuitive. Like everyone I interviewed, Allswede purchased his OneWheel during the pandemic. After just a few months he decided to ride 230 miles from Lansing to the Mackinac bridge. “No one else was doing it,” he said.

This is the central theme in Lansing’s OneWheel scene: a group of early adopters, engineering nerds, and adrenaline junkies out for community and fun. Riders connect with each other using an app that locates other OneWheel owners and coordinates group rides. Ritchie describes the Lansing group as helpful, inclusive and intellectual. Of her and her friend Rusty, she said, “We’re both super nerds.”

According to Shawn Dyer, an IT professional and father of one, the best thing about OneWheels is the diversity of people who ride them. Dyer, who grew up skateboarding, said this community is different. “You don’t need to be a professional athlete, or in peak physical condition. I’m in my mid-to-late 40s now, and it’s great to see all ages and levels of fitness coming out and having fun. That’s what it’s all about.”

A OneWheel might boast a quicker learning curve than a traditional, four-wheeled skateboard, but it comes with added costs and maintenance. To start, the boards are over $1,000. They aren’t waterproof, and they shouldn’t be left out in the heat or extreme cold.

OneWheel’s website states that the boards are optimized to move over any surface provided the rider is sufficiently practiced. But defining where these personal electric vehicles fit into our state’s mix of pedestrian and vehicular traffic is ongoing. In 2018, the Michigan State Police released an update to the vehicle code defining and regulating “electric skateboards.” It states that electric skateboards “must have an electrical propulsion system that does not exceed 2,500 watts and a maximum speed on a paved level surface that does not exceed 25 mph.” OneWheels fall into this category. They are allowed on sidewalks and in roadways if riders are within the speed limit, stay to the right and yield to pedestrians. But the updated vehicle code does not govern every municipality. The code states, “Local governments and certain state entities may adopt regulations and certain prohibitions regarding the operation of electric skateboards.”

In Greater Lansing, rules posted on the Ingham County Parks website do not specify electric skateboards, just “motorized vehicles.” Among other requirements, speeds are limited to 15 mph unless posted otherwise, and they must stay on roadways — again, unless otherwise posted.

In Lansing parks, a city ordinance says “powered vehicles” are only permitted on roadways and parking areas.

When I meet Ahmed Aldhaheri, a 33-year-old East Lansing native, he was covered head-to-toe in safety gear and looks like a villain from a Marvel movie. Aldhaheri always wears his helmet and encouraged others to do the same. He owns more than one personal electric vehicle, but today he was riding his electric unicycle that goes up to 45pmh! Unlike OneWheels, electric unicycles like Aldhaheri’s are not defined under the current update to the state’s Vehicle Code.

Throughout the pandemic, many adults have increased their levels of drinking and drug use to cope with social isolation. But for Aldhaheri, who doesn’t drink for religious reasons, that method of coping wasn’t an option. Luckily for him, he’s found a different kind of escape.

“I used to get bored in Lansing, but now I see it in a different way,” he said. “It’s kind of like you’re playing a game. When a new trail opens or a new place opens you go see that place, it’s like, a new level.”

After a group picture, everyone was ready to ride out together. I ask Aldhaheri one final question about his status as the unofficial leader of this group. He denied it, saying the group doesn’t have a leader: “They only say that because when I set the pace and ride out in front, I care about the last person as much as the first.”