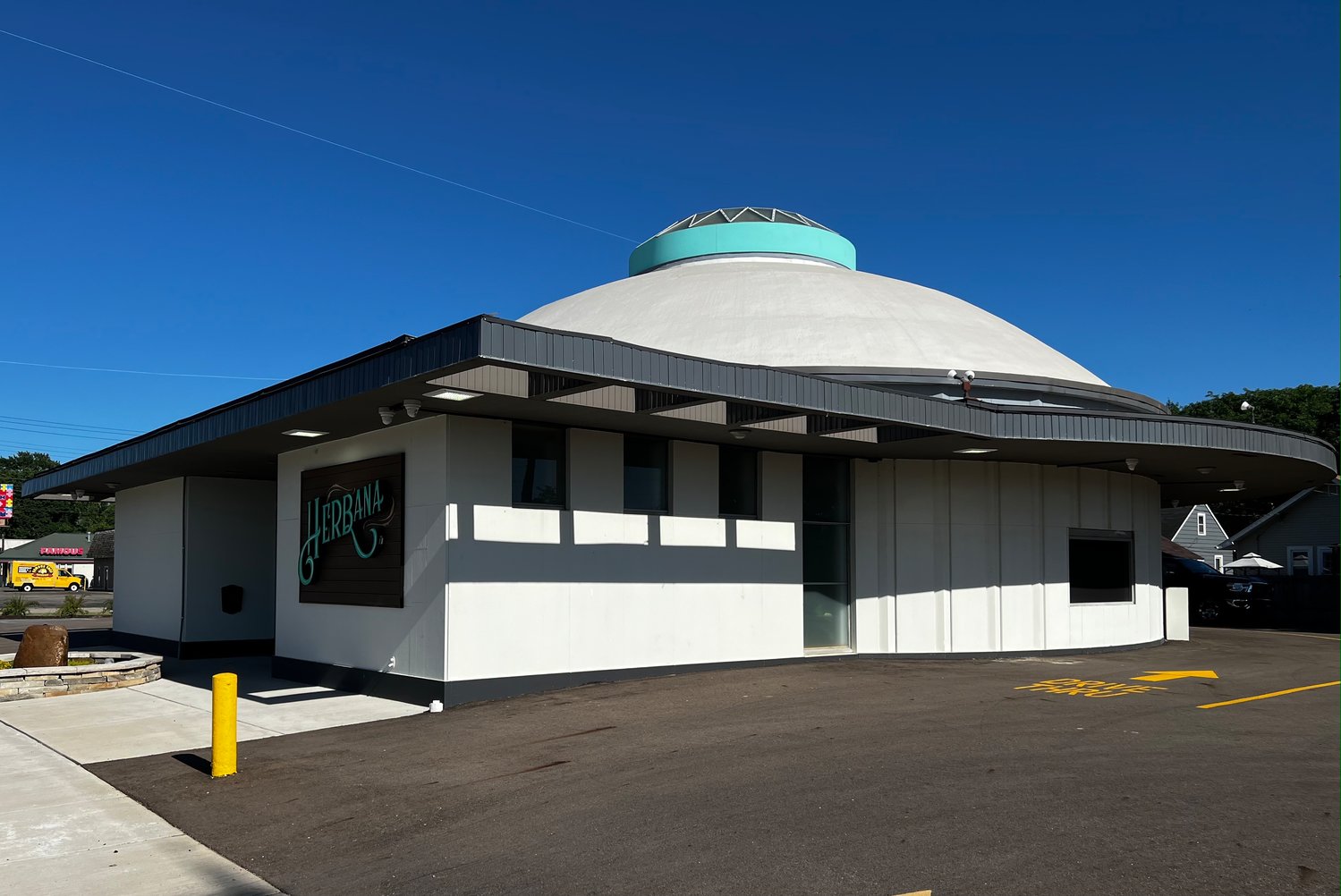 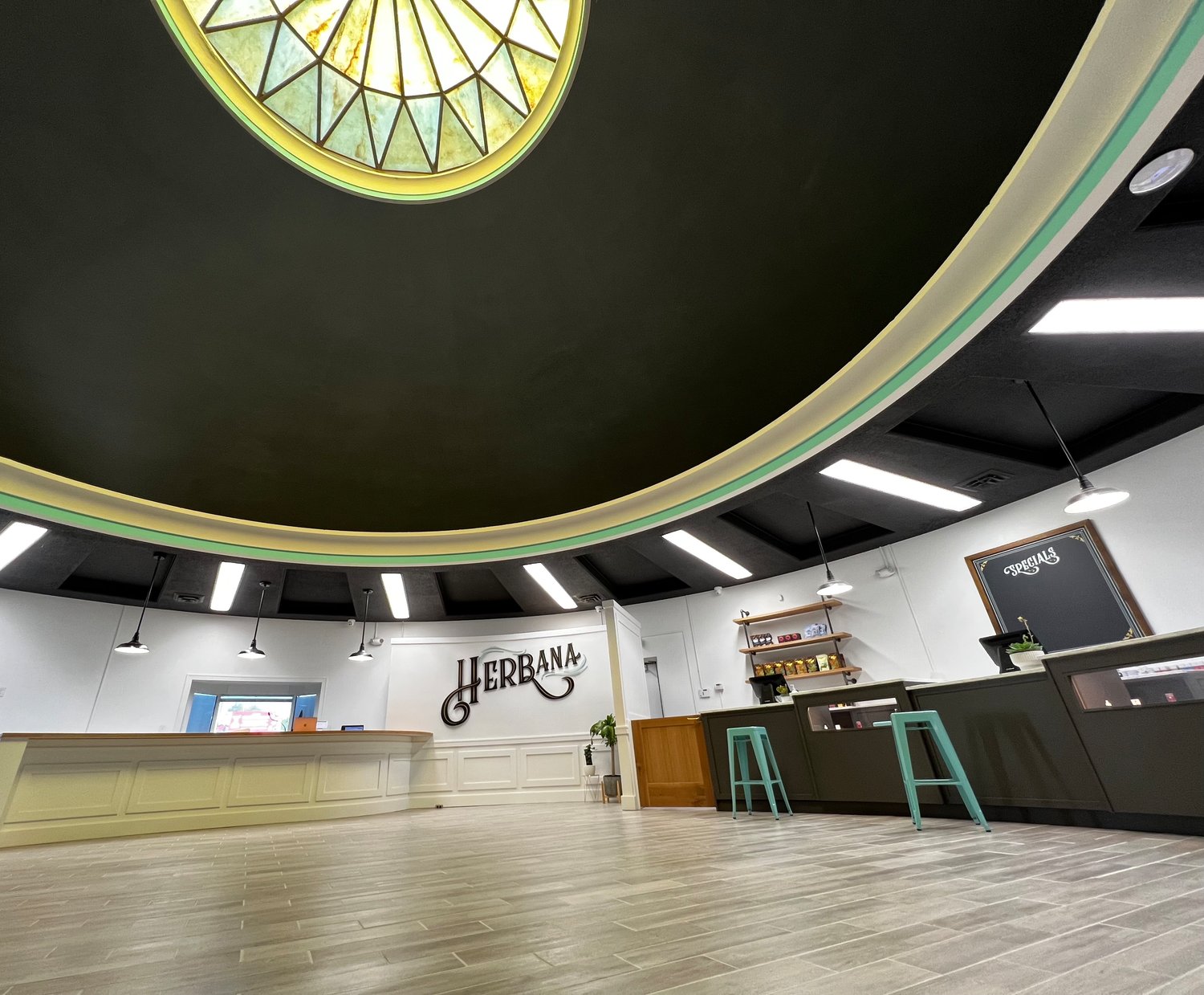 The iconic domed structure (which has a twin in Chen’s Chinese Restaurant on Larch Street) used to be a Michigan Catholic Credit Union branch. It even kept the drive-thru window.
Kyle Kaminski
Posted Thursday, June 30, 2022 12:01 am

“We’ve been in the industry since the beginning here in Michigan. We know what we’re doing. It’s a clean, friendly place to be. It’s that vibe, along with our commitment to treat our staff well,””
Al Moroz

Kyle Kaminski is a journalist and cannabis enthusiast. Editor & Publisher magazine has labeled him “arguably, the state’s authority on everything you need to know about cannabis.” Have a suggestion for a dank new product or a feature idea? Email                  lansterdam@lansingcitypulse.com.

Lansing is on the fast track to regaining its title as the Cannabis Capital of Michigan this summer with yet another dispensary opening its doors here this month — this time with a shop called Herbana, which opened June 17 without much fanfare on Saginaw Street, just west of Famous Taco. Its arrival got a bit louder with a grand opening celebration over the weekend.

By my count, Herbana marks at least 21 dispensaries in the city, just shy of the 24 pot shops in Ann Arbor. But with seven more set to open over the next few months, we’re well on our way to putting ourselves on the map for something other than Quality Dairy chip dip. (Though, we’re still going to need plenty of that too.)

I caught wind late last year of Herbana’s plans to move into Lansing and in December took a drive over to Ann Arbor to check out its flagship store for a live-action sneak preview. City officials told me they expected the shop to open in January, but there were a few delays. As it turns out, a giant cement dome that used to be a credit union isn’t the easiest of renovations.

Last week, regional manager Al Moroz invited me over for a tour and to explain exactly what sets his newly opened shop apart from all the others in the city — aside from the echo.

“We’ve been in the industry since the beginning here in Michigan. We know what we’re doing. It’s a clean, friendly place to be. It’s that vibe, along with our commitment to treat our staff well,” he said. “Happy people sell happy weed to happy customers, and that’s what we’re all about.”

Herbana is a sort of sister company to Arbors Wellness in Ann Arbor — one of the state’s oldest dispensaries and the first to be recreationally licensed in the state. It’s also a subsidiary to one of Michigan’s larger cannabis empires, Arbor Holdings, which operates its own cultivation and processing facilities, Arbor Farm and Arbor Kitchen, as well as two other Herbana locations.

Moroz correlates Herbana’s above-average budtender retention rate with an ability to build deeper connections (along with better product recommendations) for customers. It’s not uncommon for regular shoppers to drop by the Ann Arbor location twice daily, he said.

The bargain prices don’t hurt either: Herbana ounces are as low as $100. Most eighters are $20 to $30. Only a few hit their top shelf for $50; They’ll learn soon enough how slowly those sell.

“It wasn’t the best time to open a store with the price of cannabis dropping so dramatically, but we’ve been in the industry long enough, we knew this kind of thing was coming,” Moroz said.

“Plus, it’s the Capital City. It’s a thoroughfare. Even if we have a lot of competition, we feel we can generate business and continue to expand the idea of Lansing as a cannabis destination.”

The dome is an old Michigan Catholic Credit Union — also the former home of Walk In Truth Ministries. You can find its twin on North East Street at Chen’s Chinese Restaurant.

The vast rotunda has been painted black and trimmed with the company’s signature shade of aquamarine. The walls are surrounded by typical pot shop goodies — cases of gummies, tinctures and other snacks, bags of pre-packaged bud, vaporizer cartridges galore. They haven’t quite figured out what to do with the empty echo chamber in the middle, but it sure is unique.

And one of the best features: Herbana is still using the original drive-thru window from the old credit union, so you can order online and quickly snag a bag on the way home from work. That makes it the second shop with a drive-thru window after Bazonzoes recently opened a location on the south side.

Moroz steered me toward Herbana’s in-house brands, grown by Arbor Farm and packaged in-house by Arbor Kitchen brand. The company has developed a reputation for putting out sincerely mind-rattling sativa strains. The best of my haul was a $40 eighter of Golden Goat and a $30 eighter of Green Crack — both of which I haven’t seen at other stores across Lansing.

Ending it on a high note