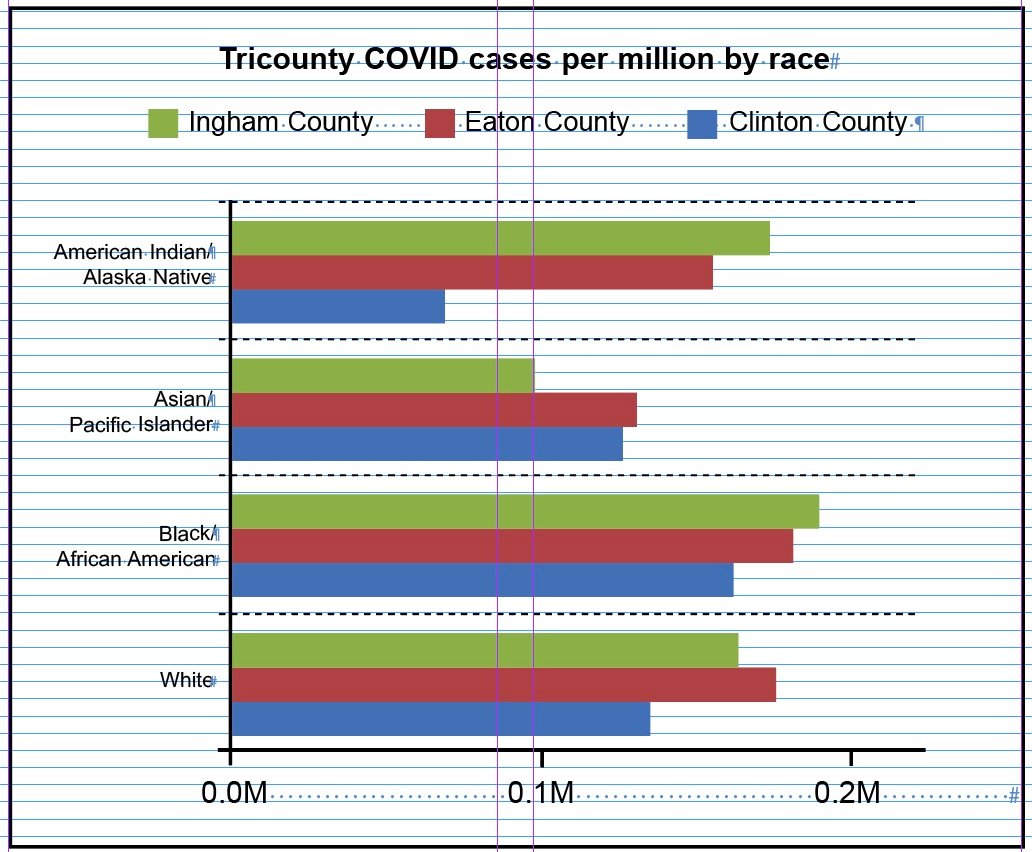 The Rev. Vincent Richardson of Cristo Rey Catholic Church has celebrated Mass for at least 14 parishioners whose deaths were related to COVID.

“When you know someone who dies or is seriously hospitalized by this virus, that certainly affects your perspective,” said Richardson, whose southside congregation is mostly Latinx.

As a result of that changing perspective about the virus that struck the Latinx community in Ingham, Eaton and Clinton counties harder than other ethnicities, he was quick to partner with the Ingham County Health Department to do COVID testing at the church as well as provide a vaccine clinic.

In the first months of the pandemic in Ingham County, Black residents had nearly double the rate of infection and death than other subpopulations. Hope Lovell, chair of the Ingham Community Health Centers, said the racial disparity concerns with Black community members are driven by a variety of intersecting concerns and obstacles.

“It’s like an onion,” she said. “It starts with hundreds of years of experimentation on the Black communities, complicated by the employment and educational disparities as well as lack of easy access to medical care or insurance and finally back to being able to actually access medical care.”

Much of the complicated processes of peeling apart the onion of obstacles, said Lovell, who is Black, is left for the women in the community to juggle and overcome — leaving them worn down and without time for themselves.

Communities of color are also burdened by a higher incidence of underlying health conditions like heart disease, diabetes, lung disease and kidney disease, which can complicate a COVID infection, sometimes making it more lethal. Those high incidences of comorbidities were well known before COVID hit, but the same onion layers prevented full access to care, increasing the lethality and severity of COVID infections.

Last week, The New York Times reported that nationwide death rates for white Americans exceeded those of all other racial groups in the last year. Michigan data shows that while the rate of death among white Michiganders has narrowed in comparison to Black Michiganders over all, Black Michiganders continue to have the higher death rate. Ingham and Eaton counties are the same, but in Clinton County white residents have a death rate nearly double Black residents. According to the U.S. Census Bureau, 2.1% of Clinton County’s population is Black, while 93.6% of residents in the county are white.

State Medical Director Natasha Bagdasarian said there are pockets — such as Clinton County where infections and deaths in white residents may outpace other races — but those are the exception to the overall racial disparities across the state.

“We’ve made some inroads in reducing the racial disparities, but the state as a whole is by no means at a place where the virus is equitably distributed,” she said. “We have pockets where one racial demographic may outpace others. We are still trying to tease that data out from the larger data sets.”

Ingham County Health Officer Linda Vail said the Times’ reporting “does not match what we are seeing in the county, and not in the data I have seen from the state.”

While Black residents of the state and county tended to lead the infection and death rates in the tricounty area in the first year of the pandemic, Native Americans have caught up or surpassed them.

That’s a trend first noted in the western U.S., particularly on Navajo reservations. But that increase has also appeared in state and county-level data.

A state official who works closely with Michigan tribal leaders on a variety of concerns for the tribes of Michigan said some of this disparity is driven by the fact the parts of the state of Michigan are not tribal lands or connected to tribal lands, creating a separated community that’s more difficult to reach and work with.

“Those outside tribal reach aren’t necessarily connected to tribal community centers and municipal buildings,” said the official, who declined to be identified because she was not authorized to speak.

The other issue contributing to higher rates, noted both Lovell and the state official, is that members of the Native American and Black communities tend to work at jobs in factories and meat plants or warehouses that were considered essential. Because both communities tend to live in multigenerational housing, the virus once introduced spreads quickly. The same underlying health concerns in Black Americans are also significantly higher in Native American communities.

Vail concurred with that assessment, noting one of the first outbreaks in Ingham County was tied to one of two work locations. Many of those cases were in southeast Asians immigrant populations that were considered essential workers during the shutdown. They often lived in overcrowded, multigenerational house facilities that helped spread the virus. Those communities were among the first to have mobile vaccination clinics.

Those mobile clinics also appeared at the Lansing Area AIDS Network, said Kristina Schmidgall, executive director of the AIDS service organization. “We wanted it to be a safe, no-judge space for our clients to get tested and get their questions answered. We had pizza and laughed,” she said. “One of the clients agreed to be vaccinated that day if the client’s caseworker also received a booster shot. They both got their shot that day.”

Vincent at Cristo Rey Church said he felt an obligation to do all he could to stop the pandemic after so many funeral masses. That included mobile vaccine clinics and early testing at the church. The misinformation and hesitancy for vaccinations is going to have to be challenged on more personal levels now, rather than mass media buys, although those will continue, said Bagdasarian.

“We’re really going to need to rely on trusted messengers — like faith leaders and social media influencers to coax the hesitant into vaccinations,” she said.