Restaurants are ready to reopen in Greater Lansing. But what about the customers? 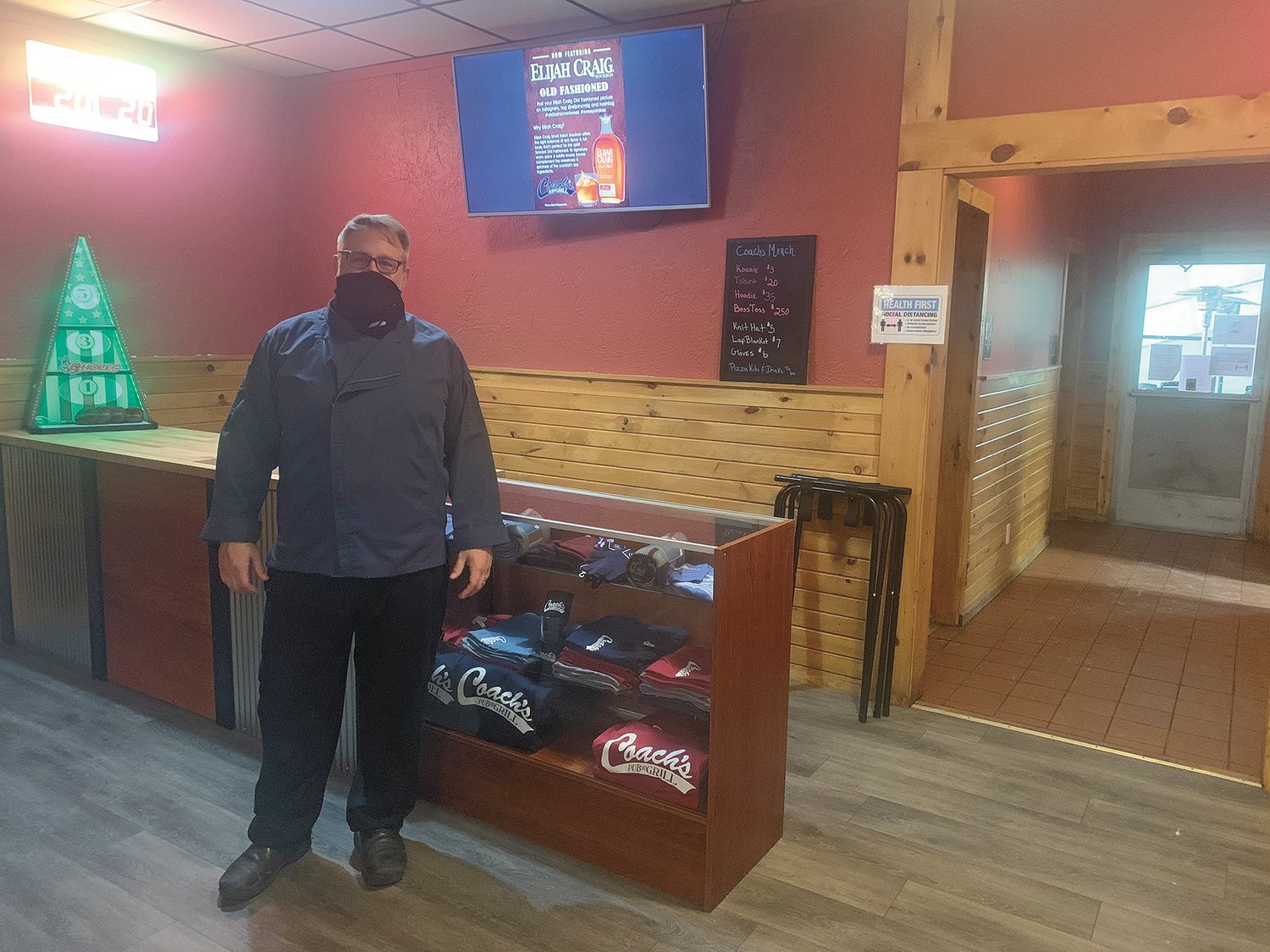 Jim MacQueen, the owner of Coach’s Pub and Grill near Holt, plans to reopen with limited capacity on Feb. 1. The large bar and restaurant will be able to accommodate about 80 guests.
Kyle Kaminski/City Pulse
Posted Thursday, January 28, 2021 12:00 am
KYLE KAMINSKI

MacQueen, the owner of Coach’s Pub and Grill near Holt, is used to a moderate lunch rush — even on Mondays. But like thousands of other restaurants across Michigan, Coach’s has been reduced to carryout and outdoor dining as the COVID-19 pandemic lingers.

On Monday, a dining room that could normally seat 300 people was empty. The kitchen staff hadn’t seen a single carryout order all afternoon. Staff used their spare time to shuffle around tables into a new socially distant seating arrangement. February can’t arrive soon enough: On Monday (Feb. 1), inside dining resumes in Michigan, albeit at 25% capacity.

“From the beginning, we’ve wanted to do our part and help get this virus under control, ebb the flow, flatten the curve. But we’ve lost over $600,000 in 2020. It’s a very significant hit,” MacQueen said. “We just didn’t write our business plan to operate with these limitations.”

It’s been since Nov. 18 when the state Department of Health and Human Services enacted and later extended a three-week “pause” on indoor dining.

As coronavirus infection rates continued to decline, state officials agreed it was time to loosen the leash on bars and restaurants — but only a little. The latest epidemic orders allow for indoor dining, but only at 25% of usual seating capacities and with a strict 10 p.m. curfew to close.

For MacQueen, it’s an opportunity that will allow nearly 80 guests to return to his restaurant — a lifeline that he hopes will allow an already battered industry to continue clinging to life in 2021. According to the Michigan Restaurant and Lodging Association, the pandemic (and related restrictions) swallowed nearly 3,000 restaurants and 200,000 jobs in 2020.

“It’s been hard for us being a family-owned, small business,” MacQueen added. “It’s translated to a lot of really difficult decisions that really could’ve all been solved by us keeping the doors open. We’ve been in full support of these measures, but that doesn’t make it less difficult.”

MacQueen joined nearly 100 other restaurant owners in urging Whitmer this month to allow restaurants to reopen safely “as soon as possible.” Matt Gillett and Travis Stoliker, co-owners of Saddleback BBQ, penned the open letter one week before the orders were lifted.

“It’s great that fewer people are getting sick and fewer people are going into the hospital, which is really what’s putting us in a position to be able to do this,” Stoliker added. “For restaurants, I think the time has come that we can slowly move toward reopening. We need the chance.”

Those statistics, in part, justified the loosened restrictions.

MacQueen said carryout and limited outdoor dining have only helped him recoup less than 30% of his usual revenues. Grant funding helped supplement his losses, but he said larger sports bars like Coach’s have — and likely always will — rely heavily on crowded rooms for cash.

While larger restaurants can weather capacity limits with more expansive seating arrangements, smaller shops like Saddleback will continue to face some limitations in February. The Lansing location isn’t large enough to add a single table. Saddleback’s other location, in Okemos, will seat fewer than 20 guests, down from 74, Stoliker said.

At some small diners, only adding a table or two might not justify keeping the lights turned on.

“For a lot of places, it’ll be a financial decision on whether the 25% occupancy is enough to keep the business open,” Stoliker added. “Just like our customers, everyone will have to make their own decisions on how they handle things, like whether they feel it’s safe to go back out again.”

City Pulse reached out to readers on Facebook shortly after the new orders were announced. And with more than 50 responses, the vast majority were hesitant about dining out in February.

“I know that a lot of customers will feel that way for a while, especially until we see more vaccines becoming available,” said Walah Aljabbary, manager at Zaytoon on Lansing’s west side. “We’ll be doing everything we can as far as sanitizing and social distancing to make people feel safe.”

At Art’s Pub in Lansing, those precautions will include a limit of 24 guests — down from about 100 outside of the pandemic. And each of them, in alignment with state orders, will be required to sign in at the front to help assist contact tracing efforts, should they become necessary.

Pizza helped supplement carryout sales in recent months, but owner Greg Sinicropi recognizes that some types of bar food (like burgers) don’t always make for the best to-go orders. Buns get soggy. That melted layer of cheese can become stiff. Some things are best enjoyed right away.

Restaurants are also battling against a nationwide lag in vaccine distribution. Whitmer’s goal of 50,000 inoculations a day could allow the state to hit its goal of vaccinating 70% of people age 16 and older by August. At the current rate, that mark wouldn’t be reached for yet another year.

“I don’t expect things to jump back to normal for quite a long time,” Sinicropi added. “Right now, we’re also dealing with a new variant of the virus and a slow rollout of the vaccine. It’s going to take a while for people to be totally comfortable going back out, and that makes a lot of sense.”

Sinicropi and the others who signed Saddleback’s letter this month emphasized that their suggestion to quickly reopen restaurants wasn’t designed as criticism for the governor — more of a polite request to reconsider the metrics guiding decisions to keep dining rooms totally closed. None of them wanted to align themselves with the right-wing Capitol protest crowd.

“We just felt that a few bad apples might’ve spoiled it for the whole bunch,” Sinicropi added. “Like others, we’ve been paying close attention to the rules and guidelines to make this a safe experience. We just wanted to let the governor know that many of us were taking this seriously and felt like we were ready to begin safely reopening, that now was the time to get going again.”