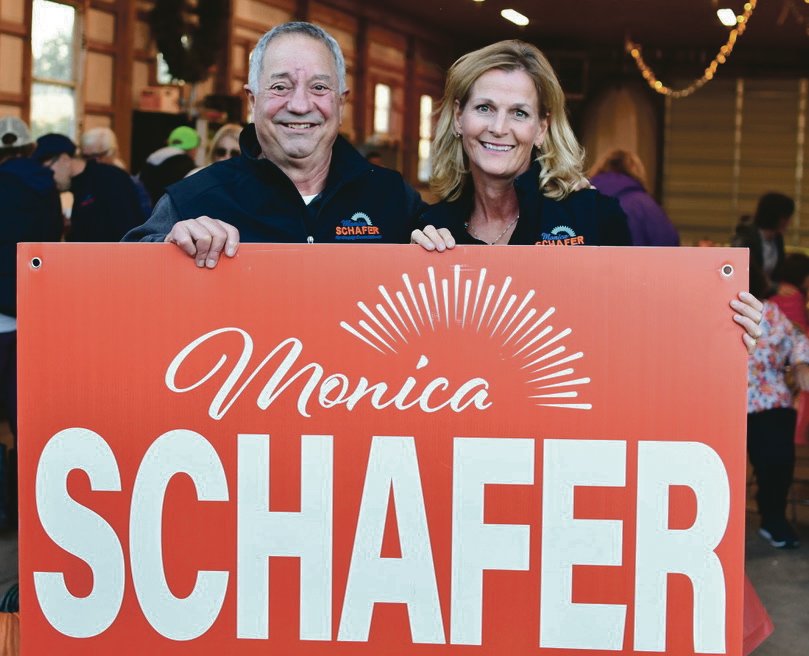 Monica Schafer, the GOP candidate for the Ingham County Board of Commissioners in the 15th District, shares a moment with a supporter during a Sept. 29 fundraiser at Barkham Farms in Haslett.
Courtesy Monica Schafer for County Commission Facebook Page 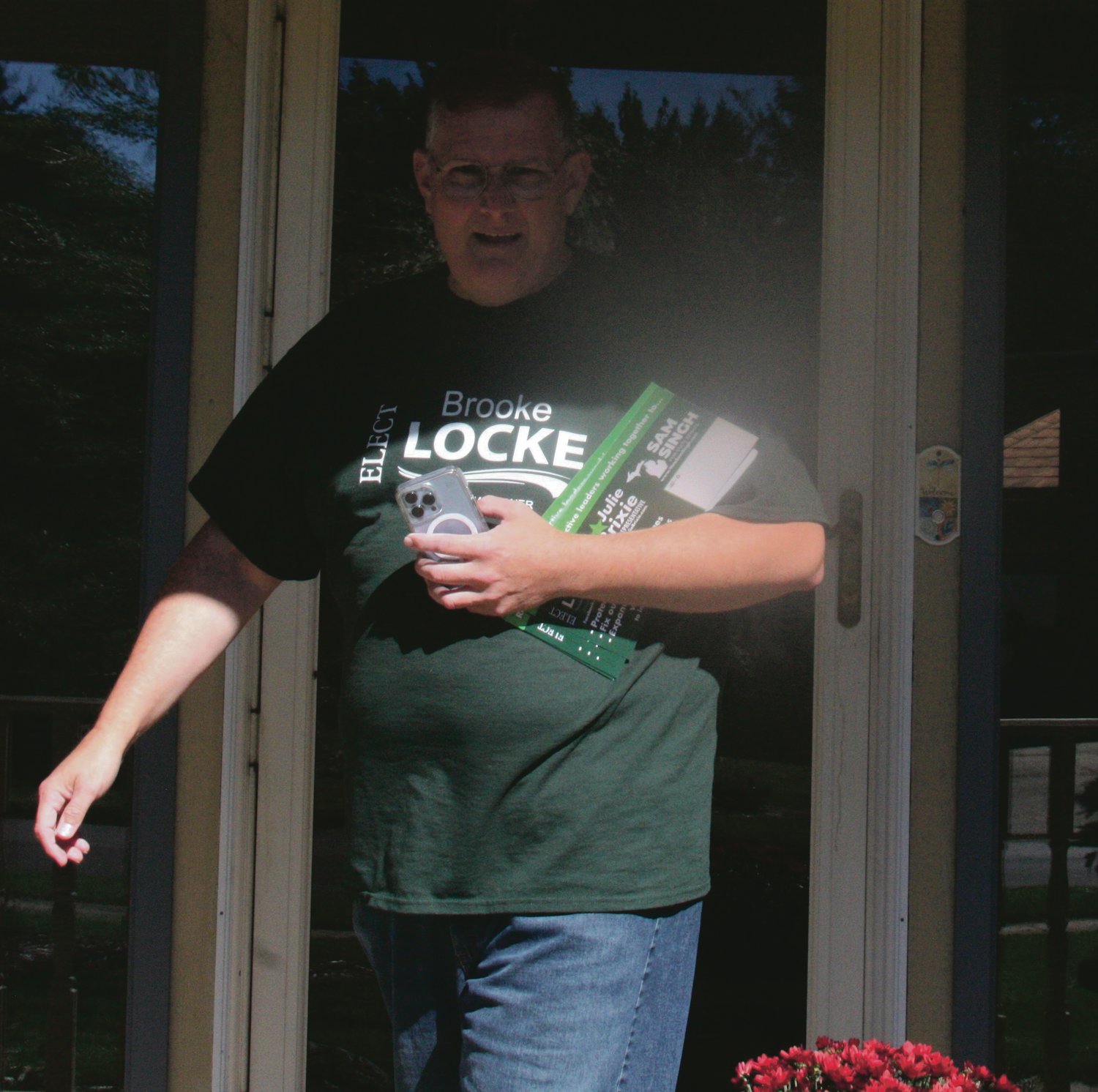 Francis Schafer first encountered Monica Schafer, the Republican nominee for the Ingham County Board of Commissioners District 15, at a senior citizens event in Williamston. He liked her, he said, because she was a “very strong conservative.”

“That’s what I appreciate right now,” said Schafer, a retired Michigan State Police systems analyst who said he is unrelated to the candidate.

Defining conservative was easy for him.

“I set it up as following the words of God, the Bible,” he said over the roar of a riding lawn mower next door. “I am a Latter Day Saint. Following the word of God, sitting on the right hand of God — that’s important. She’s not a Latter Day Saint, but she’s, I think, she’s a Catholic. But she’s a Christian. From what I see; from what she talks about; yes, she does follow the word of God pretty close.”

In a neighborhood on the other side of Grand River in Williamston, another man talked about his support for Democrat Brooke Locke. The man declined to give his name “because I work for a Republican and I work with Republicans.”

But his reason for supporting Locke and a load of Democrats this November is simple.

“After Trump, I will never support a Republican again,” he said, his voice shaking with emotion. “I want them all out. All of them. And I used to split my ticket, you know? But not anymore.”

The two residents exemplify the battle unfolding in Williamston and across the 15th. It comprises two precincts in Meridian Township, the city of Williamston, the village of Webberville and Williamstown, Leroy and Locke townships. The new district, part of the decennial redistricting, is a mix of suburban middle-class communities and rural, farming centers. The area has seen a slow shift to Democratic voting over the years.

In the primary in August, Democrats hit the polls in the district battle 2,433 votes to the Republican vote of 2,006 votes.

“Yes it's competitive,” Ingham County Republican Party Chair Tom Klunzinger said of the district. “If the Dems are looking somewhere to spend their extra money, it would be on that.”

Ingham County Democratic Party Chair Chris Swope said the area has become “purple” over the years. He sees a real possibility Dems could pick up the seat.

“It’s a close race,” he said. “And the district is tight. I think Brooke is working hard and he’s a good candidate with ties to the community – that helps him.”

Schafer, 50, declined multiple opportunities to be interviewed by City Pulse. She said the race is tight and she is “focusing on her campaign.” The only endorsement she touts on her website is that of current Republican County Commissioner Randy Schafer, who represented some portions of the new district. Schafer — no relation to Monica Schafer — is retiring after 38 years.

Monica Schafer has also received the Right to Life Michigan endorsement, something not found on her website. Many of the homes City Pulse visited or drove by with Schafer signs also had signs opposing the constitutional amendment on the ballot in November to enshrine abortion as a right.

Locke, 48, said when he was ramping up his run for commissioner and seeking petition signatures to get on the ballot, he was also asking people to sign the ballot initiative petition.

“People asked me, ‘What are you doing?’” he said. “I told them, if I lose for doing this, that's OK. A woman’s right to choose is way more important than me winning a seat on the Commission.”

The Lansing-based political action committee Michigan Deserves Better hit mailboxes over the weekend with a mailer that claimed his opponent was “not being honest.”

The mailer noted her endorsement from RTL, her support of Donald Trump and her involvement in a 2018 lawsuit against Williamston Community Schools for adopting an inclusive transgender policy. It also alleges she had “tried to weaponize her religion” by attending Locke’s events “to harass and provoke a response.”

Locke said he was uncertain what the mailer was referring to with the allegation of weaponizing her religion. Although, he said when he hosted a fundraiser with drag queens, in which he too performed, Schafer allegedly sent a photographer to the event.

Locke is hearing the pushback at the doors over being gay as well. He said he has been called a “pedophile,” “groomer” and more at the doors, followed by the door being shut in his face. Those allegations are part of a fake conspiracy that high level political leaders and all Democrats are part of a cabal of satan-worshiping, child-molesting power elites controlling America. The claim is driven by the online conspiracy of “Q” and has been a growing focus of Republicans in Michigan — from Tudor Dixon down the ticket — as the party struggles to gain financial traction in the last five weeks of the campaign.

But at the end of the day, Locke said, those setbacks — frustrating and draining as they can be — are secondary to talking to voters about investing in rural infrastructure, helping farmers and small businesses and representing the entire district.

“It’s not really what this campaign is about,” he said. “Yes, I am gay. That’s who I am. I am not going to run away from that or pretend, it’s just part of me.”

On Sunday, at the doors he knocked, passing out full-color campaign literature for Democrats Sam Singh, who is seeking to be a state senator for the district, Julie Brixie who is attempting to win the state House seat in the district, and Locke — people were clear they were planning to vote for the three Democrats. There weren't any questions from the voters.

After each contact, Locke — his hair dyed red because he was tired of gray — stopped and updated shared voter software to note the residents were voting for the three Democrats. The database prevents teams of volunteers from continuing to knock on the doors of those voters.

Locke won’t forget this race, nor will the community. Schafer is a polarizing candidate, said Swope, and that will be reflected in the polls in November.

“The whole conversations when people heard Monica Schafer was running, people were hardened that they wanted to defeat her,” Swope said. There’s a whole viewpoint that they want to end her political career.”