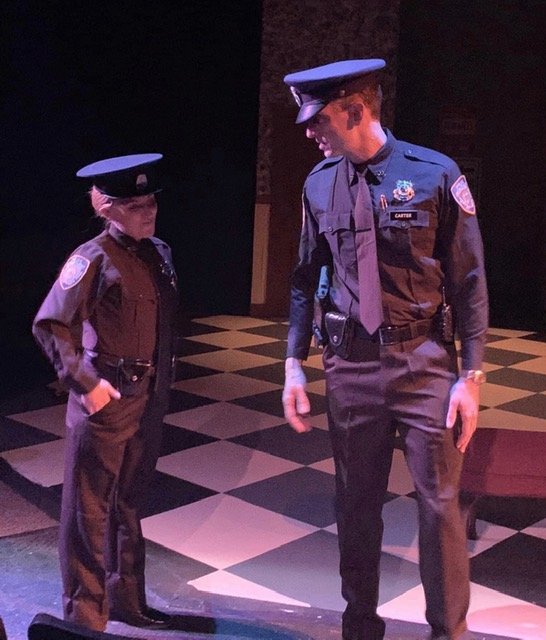 “Lobby Hero” exposes how moral decisions can cause many different reactions.   After seeing Riverwalk Theatre’s production of the Kenneth Lonergan play, I had just one unwavering reaction — admiration.

As the play unfolds, the characters reveal more of their history and personality.  All the actors fit their roles well.  They made the audience feel like they were watching believable people, not just actors, interact over the course of two hours (including intermission). Ndegwa McCloud is William, a captain of a security team assigned to a fading Manhattan apartment.  McCloud succeeds in expressing William’s anguish and inner turmoil.  There is nothing pretentious about William’s image or McCloud’s portrayal.

Andrew Stewart has the ideal posture and voice for a New York street cop named Bill.  The confidence and cockiness of the officer — and Stewart’s acting chops — never falter.  He does a terrific job of making Officer Bill intimidating.

Rachel Daugherty plays Officer Dawn, Bill’s newbie partner, with style.  Her consistent city accent is remarkable.  Daugherty can also project strong emotions by only eye movements and body stance.  Despite a too-obvious wig, she makes us care about Dawn’s struggles as a female cop.

Ayden Soupal is the night guard in “Lobby Hero.”  Jeff is part philosopher, part nerd, part decent guy and part loser.  Soupal gives Jeff a realistic persona.  More and more, we feel like we know the always-thinking, hard to keep quiet, fast-talking jokester.  Soupal helps elevate what first seems to be an incidental role to have spotlight qualities.

Lonergan’s knack for layered characters and potent dialogue is evident in “Lobby Hero.”  Our impressions and respect for the foursome change often as their conversations continue.  Just as the play’s dilemma of lying or telling the truth has many sides, the characters are similarly faceted. Popovich keeps the often quick and sometimes overlapping exchanges rolling.  The meant-for-adults “Lobby Hero” is a mix of chuckles and frequent brow-wrinkling moments.  Popovich adjusts the pace to accommodate both and takes the actors extremely close to the audience, with effective results.

Lighting by Joe Dickson precisely illuminates the shifting action.  Authentic guard and police costumes by Rachel Kay add to the realism.  An uncomplicated-yet-detailed lobby designed by Popovich and Leroy Cupp is a fitting backdrop.

For “Lobby Hero’s” curtain calls, I wanted to cheer Jeff’s accomplishments and comfort William for his hard choices. I felt like shaking Officer Dawn’s hand for her integrity and booing Officer Bill because he became so unlikeable. Instead, I clapped even harder for the performances by actors I admired.

Masks are required for all audience members. Reduced seating/social distancing is in place.