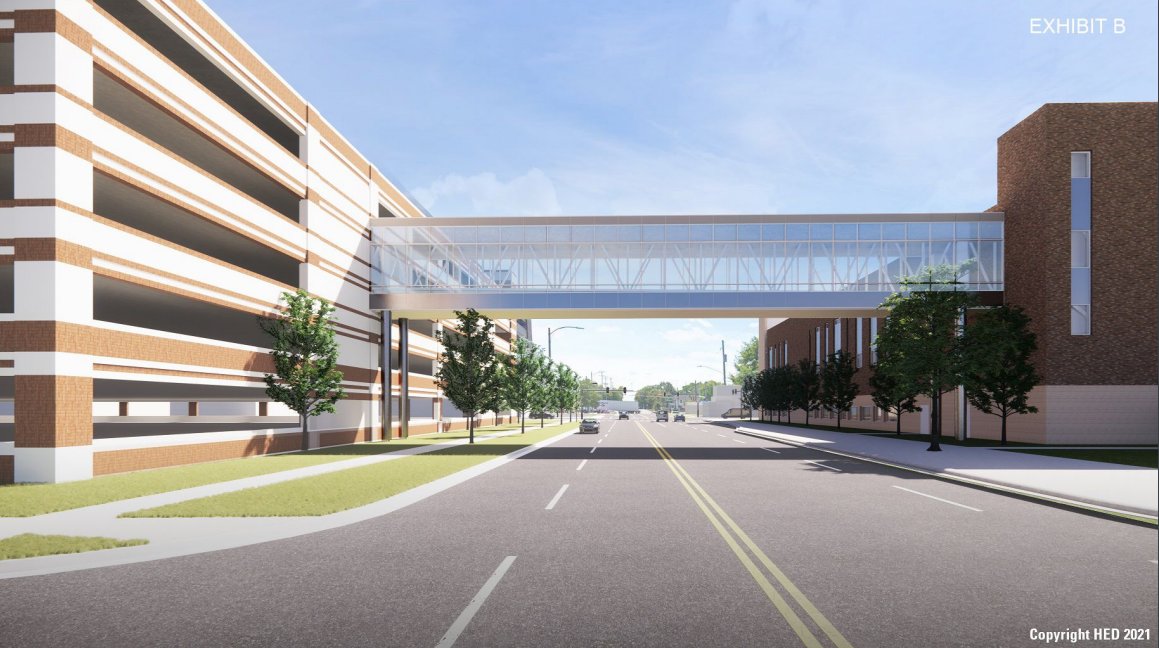 (This story was updated at 9:39 a.m. to include additional information.)

TUESDAY, April 12 — Sparrow Hospital wants to build a new pedestrian walkway over  Pennsylvania Avenue between  Michigan Avenue and Jerome Street on Lansing east side, according to an application filed with the Planning Board that seeks the rights to the airspace above the roadway.

The proposed skywalk — similar to the one over Michigan Avenue — would connect Sparrow Health Systems’ new outpatient surgery center to its main campus parking building to help patients and employees “who may need to get from one area to another quickly,”  a staff report on the project submitted to the Planning Board last week said.

Despite a staff recommendation to approve the application last Tuesday, the Planning Board tabled the concept (at Sparrow’s request) until its next meeting, which is scheduled for May 3. No specific reason was provided.

John Foren, a spokesman for Sparrow Health Systems, told City Pulse  this week that the design plans are still being finalized and that some additional details still needed to be provided to the Planning Board.

“With a new building about to be built across the street from their main buildings, Sparrow expects significant pedestrian back and forth in the near future,” according to the Planning Board application. “This skywalk would reduce the number of pedestrian-traffic conflicts.”

If approved, the skywalk is slated to arch as high as 52 feet above the street and extend about 116 feet across the right-of-way over Pennsylvania Avenue, just north of Michigan Avenue.

Last year, Sparrow announced plans to build a new five-story tower at its Lansing hospital, as well as a $40 million outpatient surgical center on Michigan Avenue, a $20 million emergency department in Okemos and $50 million worth of expanded outpatient offices across the region.

In an attached memorandum, city officials noted that they haven’t yet assigned a value to the “air rights” above the street or developed a contract that would allow the structure to stand in the right-of-way indefinitely. Officials said the city must also be listed as a co-insurer of the structure.

Sparrow’s application notes that similar plans for pedestrian bridges have faced pushback in other cities for depriving neighboring businesses an opportunity for additional foot traffic. City officials noted that the area near Sparrow Hospital, however, has very few nearby businesses — likely quelling those concerns locally as the plans move forward for the walkway next month.