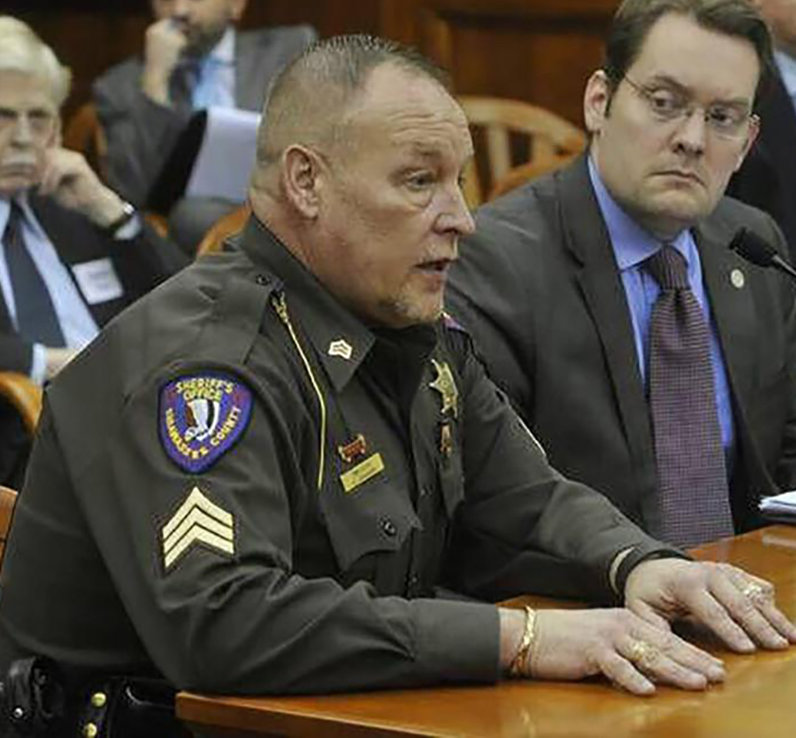 How big a break did the new sheriff of Shiawassee County, Douglas Chapman (left) receive in his drunk-driving arrest and conviction five years ago? 30th Circuit Judge Rosemarie Aquilina called it a ‘sweetheart deal.’
Courtesy of the Owosso Argus-Press
Posted Thursday, January 19, 2023 12:01 am
Todd Heywood

In every step of Shiawassee County Sheriff Douglas Chapman’s drunk driving case, he got break after break, resulting in what one judge called a “sweetheart” deal.

The deal was criticized by Ingham County Circuit Judge Rosemarie Aquilina in a phone interview. She laid the blame for the deal at the feet of retired Ingham County Prosecutor Carol Siemon.

“Without seeing all the evidence, and going on what has been reported, if this had been in front of me when I was a district court judge, this deal would only have happened if he went through sobriety court,” Aquilina said. “That’s two years of hard work. But super drunk, and with the guns, is serious and you have to get to the root of the problem. This was a sweetheart deal by Prosecutor Siemon.”

Chapman’s deal did not include a requirement he participates in a sobriety court. The deal was reached in the prosecutor’s office with Chapman’s attorney, Matt McKone, who also serves as the city attorney for the city of Owosso, in Shiawassee County. Chapman provided a letter of reference from McKone as part of his application to be appointed sheriff, which he was on Dec. 13. The drunk-driving defense was not mentioned in the letter.

Siemon, who retired last month, told City Pulse that she did not recall the 2018 case, in which the Michigan State Police arrested Chapman — then a Shiawassee County sheriff’s road patrol sergeant — after finding him passed out at the wheel of his car at the entrance to Interstate 69 in Shiawassee County.

Asked about Aquilina’s comment, Siemon texted, “I had no specific drunk driving policies, except that I took bad driving seriously (since it’s inherently dangerous).” She said she expected “the appropriate circumstances existed for any plea offer.”

Siemon, said her replacement as prosecutor, John Dewane, “typically reviewed those requests for a special prosecutor.”

In an email, Dewane said, “The plea and sentence were consistent with charging and sentencing policies under Prosecutor Carol Siemon.” Dewane was deputy chief assistant prosecuting attorney at the time.

A number of details have emerged since City Pulse first reported the story last week that raise questions about whether Chapman received special treatment.

Troopers arrested Chapman 1 a.m. Oct. 9, 2018. The vehicle was in the middle of the entrance ramp to I-69 at M71, which is the Durand Corunna exit, and was still in gear. Two loaded handguns were in a luggage container on the front seat beside him.

He refused roadside sobriety tests at the scene, so he was arrested and taken to the Flint post, where he received his first break: He was not tested until two hours after troopers found him. Even so, he had a blood alcohol level of .19 and then .17 when it was measured within minutes of each other at the post shortly after 3 a.m. The legal limit is .08.

Bowling Green State University Department of Recreation and Wellness reports that, on average, a person will lose .015 in blood alcohol content each hour. This means that at the time troopers found him passed out at the wheel, his level could have been as high as .20, over three times the legal limit and well into the “super drunk” category adopted by the state Legislature in 2010.

Yet MSP troopers only sought a charge for operating while intoxicated — a charge below the state’s super drunk law, his second break.

A spokeswoman for MSP did not immediately respond to an inquiry about this break.

His next break was the plea deal reached with the Ingham County Prosecutor’s Office.

After Shiawassee County officials recused themselves from the case, his prosecution was handled by the Ingham County Prosecutor’s Office. 54-A District Judge Louise Alderson, who has since retired, presided. The case was wrapped up when Chapman entered a guilty plea to operating impaired first offense. The prosecution dropped the drunk driving charge down another step — so, two steps below a possible “super drunk” charge — and dismissed the gun charge altogether. He paid a $150 fine, even though he could have been fined up to $700 — another break —  plus $535 in fees and court costs.

He was also ordered to pay $30 a month for probation supervision, which was done by Ingham County. That may have helped him avoid notoriety back home.

Indeed, last week, Shiawassee County Clerk Carolyn Wilson said she was unaware of Chapman’s conviction when as part of an appointment committee she voted for him for sheriff in December to replace Brian BeGole, who was elected state representative in November.

Wilson told City Pulse she did not run criminal background checks on the three candidates for interim sheriff. Wilson has also said that Probate Judge Thomas Dignan, another appointment committee member,  attempted to recuse himself from the committee, but the chairman, county Prosecutor Doug Koerner, overruled him. She said she did not know why Dignan sought to recuse himself, and Dignan has declined to talk to City Pulse.

Wilson, Dignan and Koerner were mandated to constitute the appointment committee by virtue of their positions. Koerner has not returned calls. Koerner was an assistant prosecutor at the time of Chapman’s arrest. His boss, Deanna Finnegan, recused herself from the case. Dignan is the cousin of Terrance Dignan, one of the two district judges who recused themselves in the drunk-driving case.

Chapman’s driving record from the Michigan Secretary of State’s Office reveals Chapman’s driver’s license was restricted from Dec.14, 2018, through March 13, 2019. It was reinstated on March 15. Court records show Chapman’s restrictions allowed him to “drive to and from residence, place of and during employment, treatment and support group meetings, regularly scheduled treatment for serious medical conditions, probation, community service, and school, must carry proof of destinations and hours.”

In a similar case three years later, then-Assistant Shiawassee County Prosecutor Chris Brown was charged with operating while intoxicated and two counts of possession of a firearm while impaired. The charges arose when Brown arrived at work two hours late and admitted to drinking. His blood test revealed an alcohol content of .14, nearly twice the legal limit, but not “super drunk.”

The case was brought by Michigan Attorney General Dana Nessel’s team. It resulted in a guilty plea on one count each of operating while impaired and possession of a firearm while impaired. He was ordered by 66th District Judge Ward Clarkson (the other Shiawassee County judge who recused himself in the Chapman case) to pay a $1,500 fine. Brown had already moved out of the state and licensing officials in Michigan had intervened with “intensive probation” to keep his law license.

City Pulse sought comment from Dewane about the two cases.

“You have compared this case to another — one prosecuted by another agency — where there were both similar and unique characteristics,” Dewane wrote in an email. “While each case has its own circumstances, I believe the sanctions were equivalent relative to the conduct and the evidence. Also, the plea and sentence were consistent with charging and sentencing policies under Prosecutor Carol Siemon.”

“Police are subject to the same laws as the rest of us,” Dewane said. “When a conflict of interest exists, the best practice is to provide for an outside agency to review and prosecute these cases. I believe that each of these principles were handled satisfactorily on this case.”