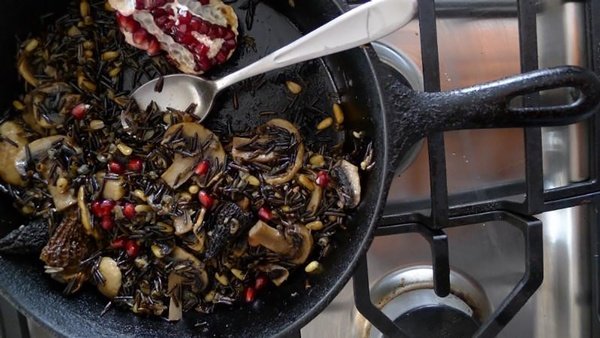 Wild rice with mixed mushrooms and pomegranate seeds, a one-pot meal that’s as unique as it is delicious.
Ari LeVaux
Posted Thursday, December 1, 2022 12:01 am
Ari LeVeaux

I met the Wild Ricer behind a ski lodge in the mountains above Lake Tahoe. We were both attending a writing workshop, and we took turns reading our work to each other.

My project was a passionate essay about the evils of Christmas tree farms that I’m embarrassed to even remember. The Wild Ricer, a rugged hunting guide from northern Wisconsin named Nick Vander Puy, introduced me to the verb “ricing” as he read an unforgettable piece about an Ojibwe elder on a lake in northern Minnesota.

Wild rice isn’t literally rice, but rather the grain of a large, aquatic grass native to the northern parts of Minnesota and Wisconsin and a similar-sized region across the border with Canada. Other than being a type of grain and elongated in shape, wild rice doesn’t resemble the soft, starchy grains after which it’s named. It’s a rugged food, more interesting than its domesticated counterpart, with a nutty, tea-like flavor and a texture that pushes back when you chew.

After the workshop, wild rice became a window into wild foods in general. Vicariously, I joined the rice hunters in their efforts when I ate it.

Most of the wild rice for sale is actually cultivated in California. This has created a divide within the wild rice community. Vander Puy, not surprisingly, sides passionately with the wild side. He says the paddy-grown stuff isn’t comparable to hand-gathered wild rice and laments that the abundance of relatively inexpensive, cultivated rice hurts the market for truly wild rice. This is more than enough to convince me to order mine from Midwestern ricers, despite the higher price tag.

When making any wild rice-based dish, the rice itself must first be prepared. It is typically cooked until soft, but one of Nick’s more recent pieces inspired me to try a different method. In the story, an Ojibwe elder tells Nick about a rice camp he visited when he was a child.

“A lot of times, you’d think we’d be just out there getting rice. But my mother also liked the bass fishes that live in the rice. So, I had to go out there half the day catching a whole stringer load of smallmouth bass on spinners and a rubber worm. We’d have fish that night, and the next day we’d have rice in the morning because we’d put it in water and it would puff up all night, and we’d eat it.”

Hand-gathered wild rice softens much more quickly than paddy-grown, which may need closer to a full day before it’s soft enough to chew.  However long it takes, soaking wild rice is worth it. The flavor is more subtle than it is when cooked.  Chased with sips of the earthy, fragrant soaking water, a bowl of soaked wild rice is about as close as you can come to slurping down a pristine lake in the middle of the forest.

Cook time for wild rice varies depending on its provenance, with hand-gathered wild rice cooking much more quickly. It can be cooked on a stovetop or baked. Soaking it first can significantly reduce the cooking time.

Add a cup of wild rice to a pot with a tight-fitting lid, along with two cups of water or stock, and simmer over medium heat on the stovetop or bake at 350. After about 45 minutes, check on it. If the liquid is nearly gone and the rice remains hard, add more liquid. Keep checking, adding more liquid if and when necessary, until the grains split, curl and bloom like tiny brown and white flowers.

For years, my go-to wild rice dish involved little more than a clove of garlic, pressed and stirred into the hot rice, followed by a tablespoon each of sesame oil and soy sauce. I would stir it around and let the garlic cook and serve with chopped scallions. For such a simple dish, it’s profoundly satisfying and was the first thing my wife wanted to eat when she became a mother.

When I have wild mushrooms on-hand, I prepare a wild rice dish that I learned while camping with a team of morel mushroom pickers along Montana’s Blackfoot River. Combining wild foods like this, with pinches of smoke, dirt and pine needles, makes for a delicious dish that hits the spot on so many levels.

This one-pot meal is equally delicious when prepared on the campfire, the stovetop or in the oven.

In a large skillet or wok, combine the butter and olive oil on medium heat. Add pine nuts and the mashed garlic. Toss the nuts just until they start to brown. Don’t over-brown.

Add the mushrooms and stir/toss them around. Season with 1/4 teaspoon of fresh ground pepper and a kiss of salt.

When the fungus starts to brown, toss in the cooked rice. Stir it around and add the cheese. Give it a squeeze of lemon and taste, adding more to taste if necessary.

Transfer the fragrant mixture onto a large plate and garnish with pomegranate seeds.