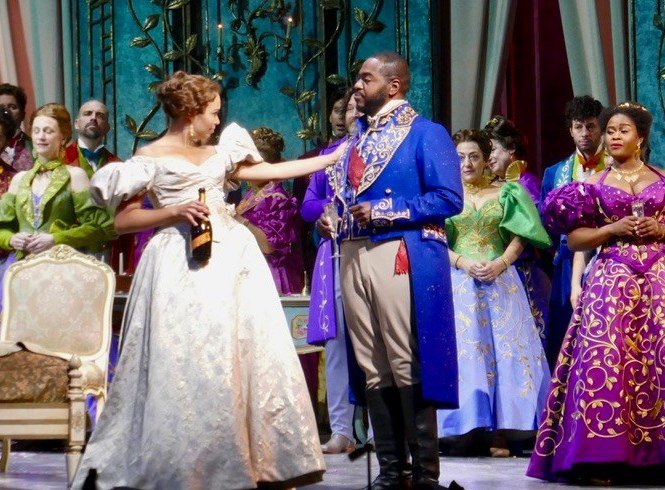 “Excuse me, sir, how do you get to the Met?” MSU vocal music alumnus Brian Major says hard work prepared him for the fateful call.
Photo by Jonathan Tichler 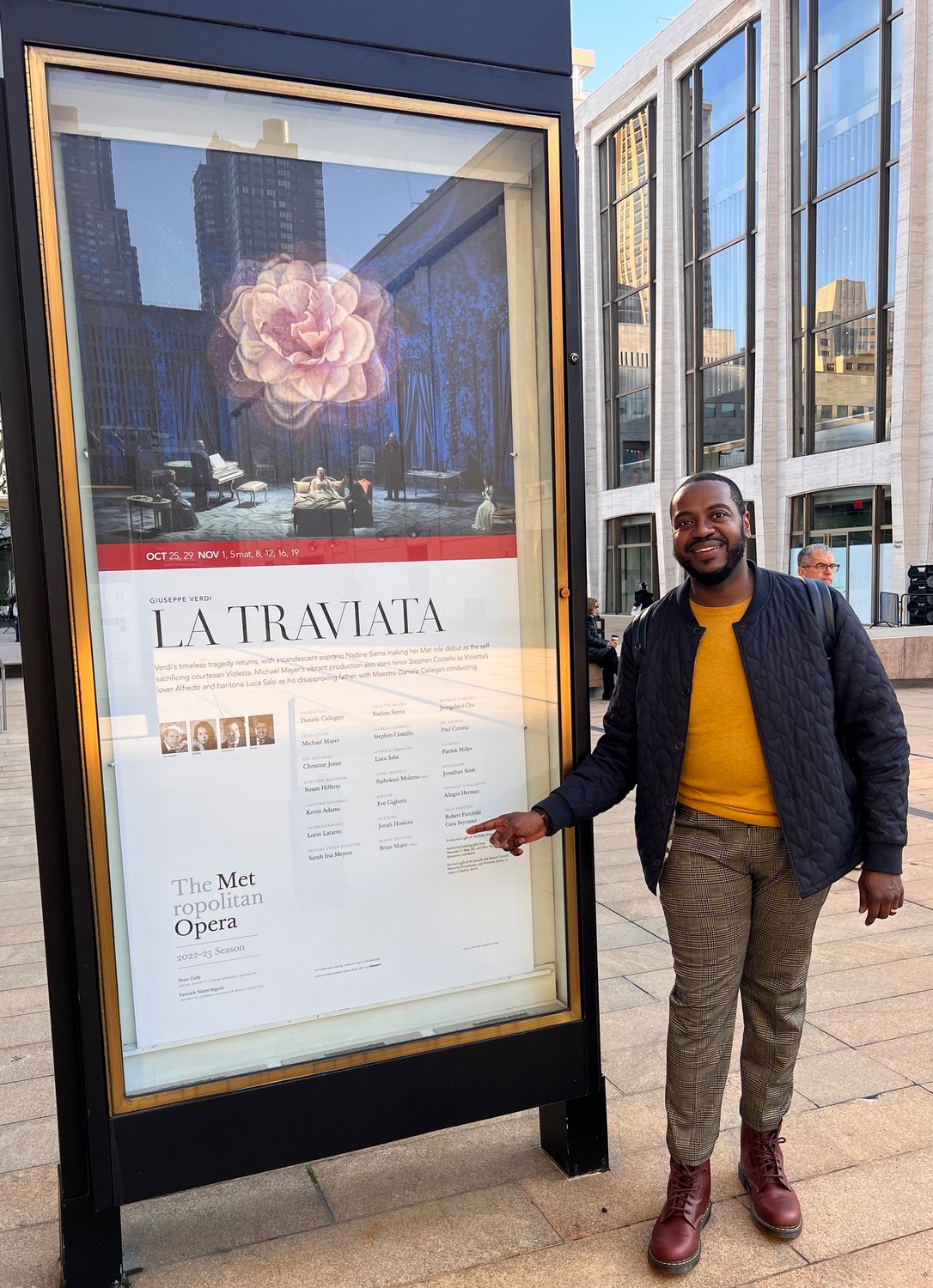 Photo by Jonathan Tichler Brian Major (in the blue waistcoat, listening to the lady with the bottle) made a vigorous Metropolitan Opera debut in an eye-popping production of Verdi’s “La Traviata.”
Courtesy
Posted Thursday, December 1, 2022 12:01 am
Lawrence Cosentino

Brian Major spent the past month or so walking the hallowed boards of New York’s Metropolitan Opera in an electric blue waistcoat embroidered with gold. No big deal, right?

“Honestly, it is just like any other stage,” he said. “You have the same obligation, as an artist, to perform to the best of your ability so an audience will enjoy a story.” Major, a baritone with a 2019 doctorate in vocal music from MSU, debuted at the Met in a lavish production of Verdi’s classic “La Traviata,” whose run ended Saturday.

He returns in April to sing in the Met’s first production of jazz trumpeter and composer Terence Blanchard’s penetrating study of an aging boxer, “Champion.”

Major admitted that before rehearsals began, walking into the Met was “like an out-of-body experience.” He got lost a few times and had to ask for help. It was hard not to think of all the greats who have sung at the theater since it was founded in 1883, but once rehearsals started, the spell broke.

“You think, ‘My God, I’m with so and so, who sang all over the world. How are they going to treat me?’” he said. “Then we’re laughing, grabbing lunch and coffee together. I jumped back into my body and really enjoyed the ride, enjoyed being on that stage.”

There was plenty to enjoy. This “La Traviata” was meant to stimulate the eye as well as the ear. A revival of director Michael Mayer’s 2018 Met production, a luridly lit head trip of electric blues, purples, pinks and golds, framed as the fairy-tale memories of the dead heroine, Violetta.

“It’s kind of over the top, but I enjoyed the costumes, especially mine, and it was very satisfying to the eye,” Major said.

The singer who plays Baron Douphol, Violetta’s indignant protector, usually gets as much critical notice as a pothole on the road to a bigger tragedy — but not with Major filling out the waistcoat.

“So many people play the Baron as an elderly man who is not attractive but happens to have enough money to afford having Violetta on his arm,” Major said. “I played it as an attractive, younger man.”

Major recalled how the majestic baritone Robert McFerrin, father of jazz singer Bobby McFerrin, was denied the role of Valentin in Charles Gounod’s “Faust” at the Met in the 1940s because he was told audiences wouldn’t accept a Black Frenchman.

“As an artist, I have to create these characters that are believable,” Major said. “But also, the way the world is going now, audiences are becoming more open to diversity. Their imagination is starting to open up and their eyes can see it.”

Over the holidays, he’ll be studying up for his next role, Ford in Verdi’s “Falstaff” at the Maryland Lyric Opera.

That’s quite a run of playing jealous rich guys, but Major’s entrée to the Met was his anguished, powerful performance as an aging boxer in “Champion” at the Boston Lyric Opera in May.

Three actors play the title character, Emile Griffith. Major was a last-minute replacement to play “old” Emile, suffering from dementia and wracked with guilt over putting an opponent into a coma years before, all while struggling with his identity as a gay man.

Major learned the huge role, full of technical and emotional challenges, in four days by rolling with the quick deadline and tapping directly into his psyche.

The experience went beyond summoning up anger, tears or joy for an ordinary performance.

Word spread that representatives from the Metropolitan Opera were coming to scout talent for the Met’s upcoming production of “Champion.”

Major got a call from the Met the following Monday.

“You hear these stories of being at the right place at the right time,” he said. “For so long, I’ve wanted that to happen, and you always think, ‘This is it,’ but you don’t know. You just have to be present, remove yourself from the situation and just do what you are supposed to do, to the best of your ability, and it will be rewarded. And here I am.”

Major grew up in Asbury Park, New Jersey. He played trumpet and sang in the high chorus, but he didn’t commit to singing until he heard a widely-acclaimed 1997 CD of Handel arias by powerhouse Welsh bass-baritone Bryn Terfel.

“To me, classical music sounded the same, but when I heard his voice — the timbre, the expression, the nuance — it was totally different,” Major said. “It was something I couldn’t do on the trumpet. I was hooked.”

Major met his wife, soprano Michelle Johnson, while studying for a master’s degree at Boston University. They have a 7-year-old daughter, Liza.

With a growing family, Major worked in customer service, hustling for singing gigs on the side, when he learned in 2016 that a friend of his, baritone Mark Rucker, was teaching at MSU. Rucker told him a graduate assistantship was available at MSU, “but you have to make your decision by Monday.”
It was a Sunday.

“I didn’t realize that the universe was preparing me for bigger and better places,” he said about his quick decision to apply.

At MSU, Major played the Count in Mozart’s “Marriage of Figaro” and the title role in Puccini’s “Gianni Schicchi.” He taught a voice class for non-music majors.

“The operas were great and the teachers were fascinating,” he said. They also went the extra mile to support his career. When Major snagged a juicy six-week gig in another city, three professors filled in to help teach his class, each guest instructor teaching two weeks.

“So many people would have said ‘no,’” Major said. “They saw something and allowed me to pursue my dream.”