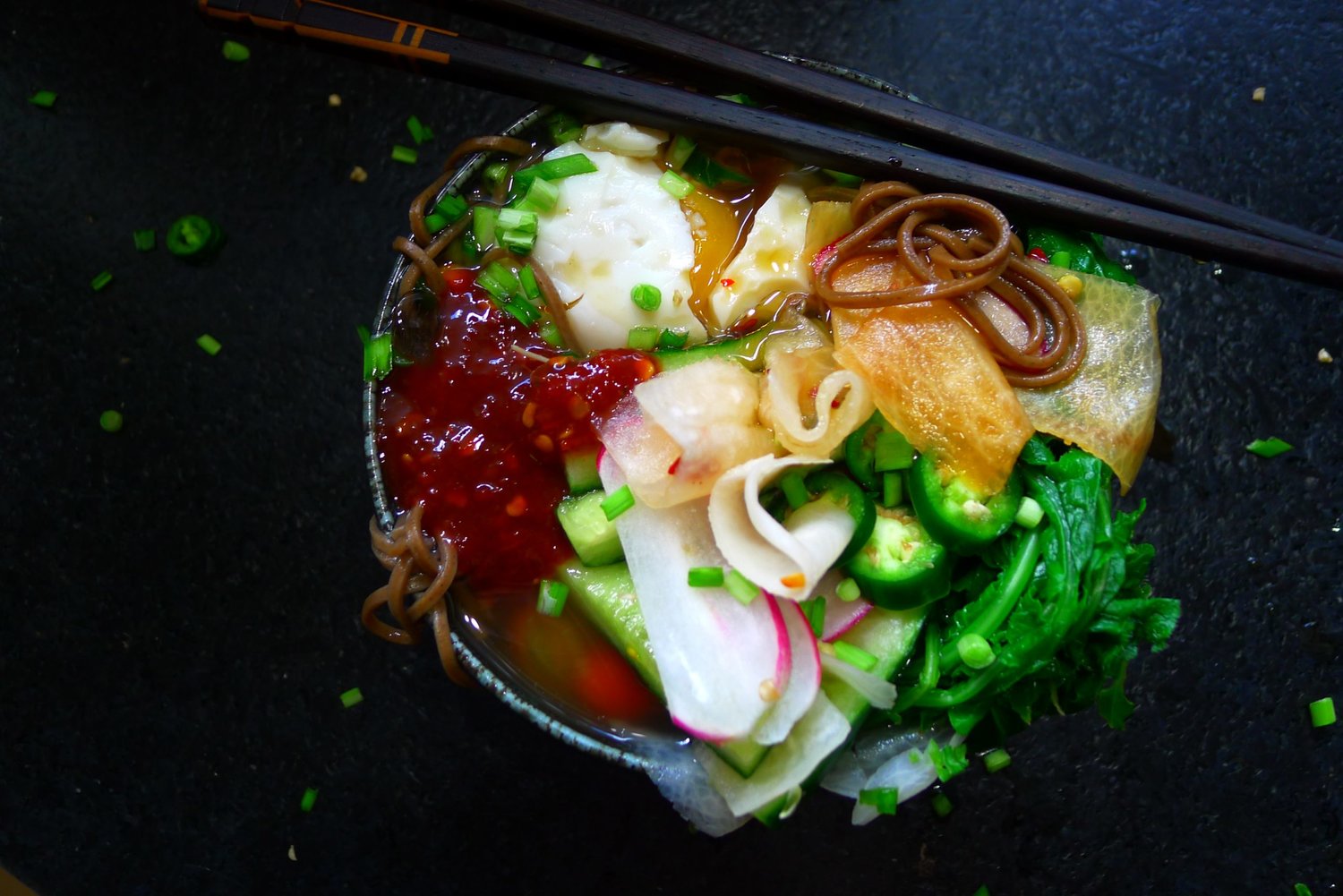 Another homemade version, with ice underneath 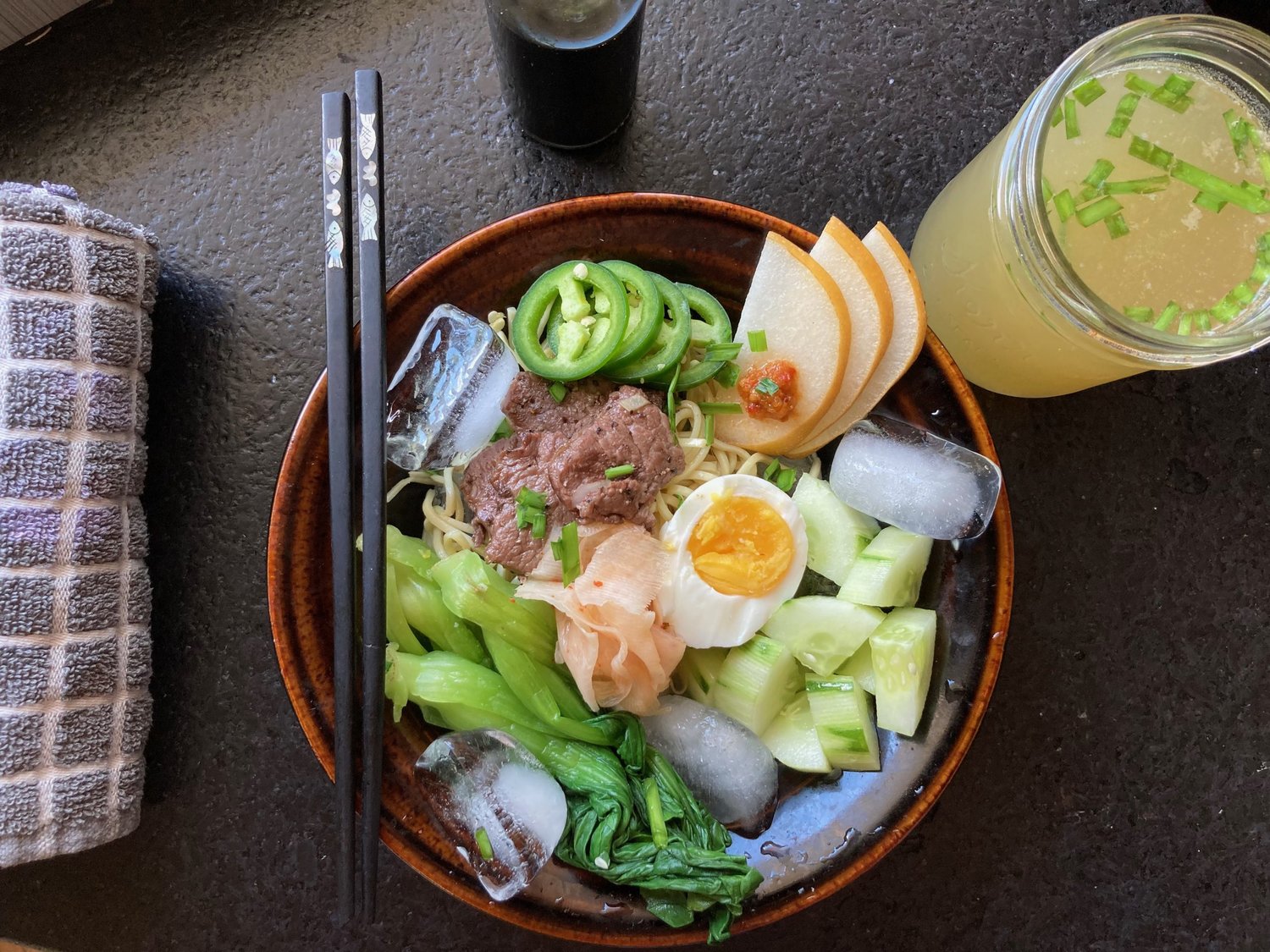 Above, a bowl of naengmyeon, with chilled broth at the ready 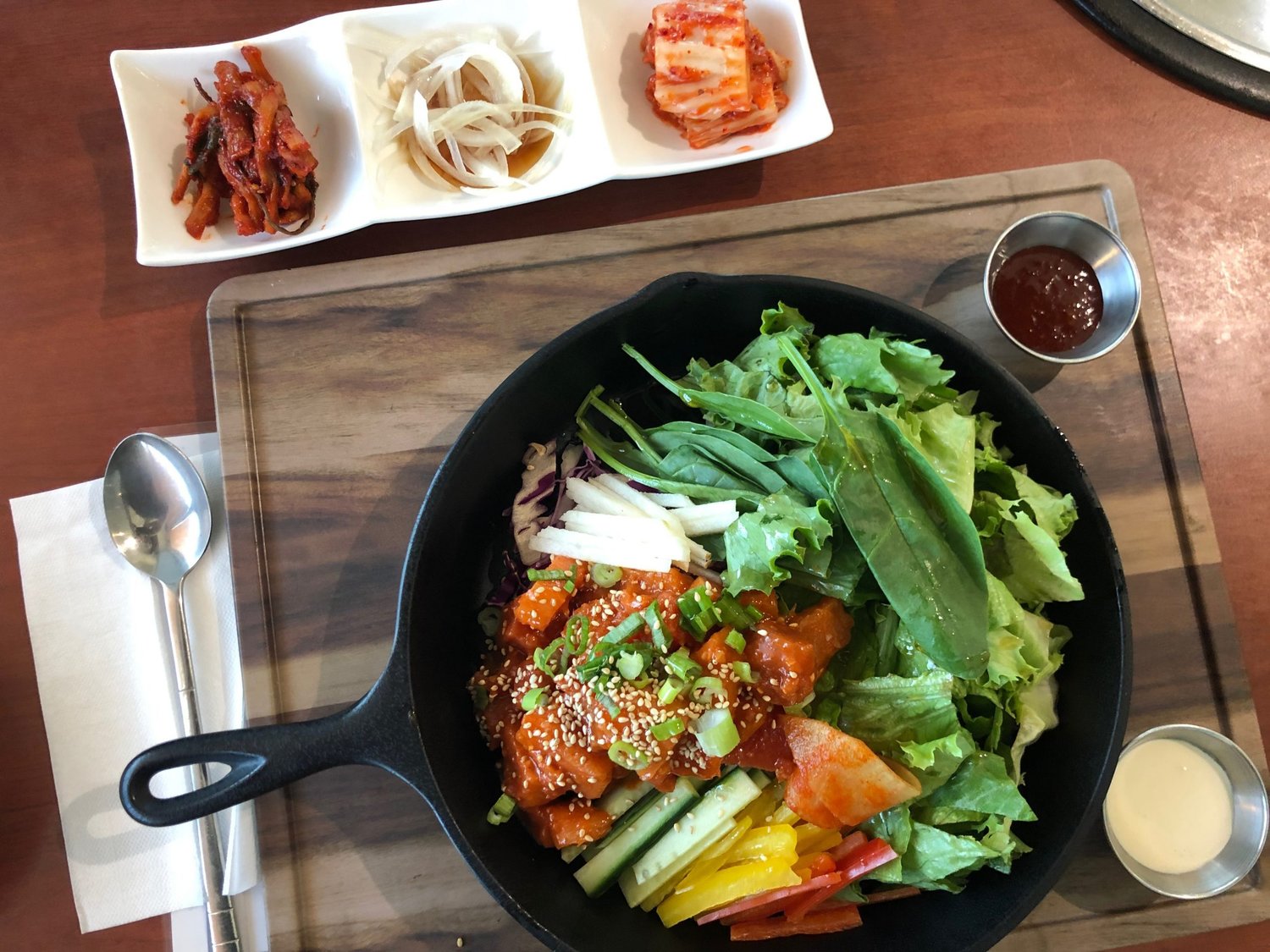 When everything is prepared and assembled, dive into this glorious bowl of diverse textures and flavors, and eat strategically. If you get too much heat from a sliced jalapeno, head for the Asian pear for refuge.  It all adds up to a savory and sour soup that’s as refreshing as iced tea, but even more nutritious and exhilarating. ”
Ari Levaux

The noodles are indeed cold, thanks to pieces of ice floating among them in the pre-chilled daikon radish broth. Atop the noodles are a colorful combination of proteins and plant parts, including meat, egg, blanched vegetables, pickled radish, hot peppers and super cool cucumbers. This treasure hunt of a meal.

I first enjoyed naengmyeon on an August afternoon in a Vancouver restaurant. It was a spicy and sour juggernaut that stopped my sweat in its tracks while being decidedly savory.

There’s no limit to the number of variations this dish can accommodate, but the radish broth itself remains the soul of naengmyeon. As soon as the daikon, ginger and onion begin simmering, an intoxicating, enticing fragrance fills the room.

In addition to the broth, there are several more steps to preparing naengmyeon, and each is basically its own recipe. We must make the daikon pickles, blanch the proteins, cook the meat, and make perfect hardboiled eggs. When these have all been prepared, we can finally assemble the finished dish.

One extremely useful piece of equipment for this dish, and many others, is a pot with a removable pasta boiler insert. With so many ingredients being pre-cooked in boiling stock, the pasta basket allows us to remove things from the kettle without the hassle and potential danger of pouring hot liquid through a strainer.

When everything is prepared and assembled, dive into this glorious bowl of diverse textures and flavors, and eat strategically. If you get too much heat from a sliced jalapeno, head for the Asian pear for refuge.  It all adds up to a savory and sour soup that’s as refreshing as iced tea, but even more nutritious and exhilarating.

There is a lot you can do with this daikon broth in addition to making naenmyeon. Last night I made a pot of rice with it, and that captivating flavor permeated every grain.

4 ounces of peeled ginger, sliced to about a quarter inch thick

If you skip the brisket, replace a quart of the water with beef (or vegetable) stock, or use bouillon cubes

Add the ingredients to a pasta basket and set it in a pot with 5 quarts of water. Bring the pot to a boil and then turn it down to a simmer, and cook for two hours. Remove the pasta basket and let the broth cool to room temperature and then chill in the fridge. Allow the brisket to cool and slice it thinly, toss the slices with salt and refrigerate them until it’s time to assemble the dish.

While the broth simmers, make the daikon pickles, boil the eggs, and prepare the noodles and vegetables as follows.

Use the peeler to cut the radish lengthwise into ribbons. Place the daikon ribbons in a bowl, and toss with the salt. Add the remaining ingredients. Toss again, and refrigerate until it’s time to assemble the bowl.

Bring a quart of water to a boil. Gently lower the eggs into the water and cook for a minute at full boil. Lower the heat to a simmer and cook for another 12 minutes. Remove the eggs and transfer them to a bowl with two quarts of cold water, and let them cool for 15 minutes. Peel under running water.

Boil 4 quarts of water in a pot with the pasta basket insert. You can also cook the noodles and vegetables in the radish stock.

Cook the noodles per the instructions on the package. Then remove the insert and plunge the noodles into cold water.  Drain and set aside.

Briefly blanch the vegetables you intend to use, according to how much time they need. For bok choy and spinach, a minute in the boiling water is all you need.

Here we assemble all of the previously prepared ingredients into bowls.

As discussed above, the brisket was cooked with the broth. But this time of year, when the garlic is fresh, I use beef bouillon in the daikon stock and go with a more tender cut of meat for the final dish. If you go this route, slice the meat thinly and fry it with minced garlic in olive oil with salt and pepper, and add these slices to the final bowl.

4 hardboiled eggs, sliced in half lengthwise

Divide the ice among the bowls. Add the noodles and give them a twist with your fingers or a fork, so they make a bit of a spiral pattern.

Artfully place the proteins, fruits and vegetables in little piles atop the noodles and ice. Place these bowls on the table and ladle in the broth. Season with a splash of soy sauce and leave the bottle on the table — along with cider vinegar and pepper paste, so the diners can personalize their salt and acid levels.

If you’re extra-thirsty, consider slurping the broth out of the bowl straight away, without chewing anything. Then refill the bowl, adjust the salt and sour and begin eating in earnest.