The day the Spartans helped ’Spartacus’ 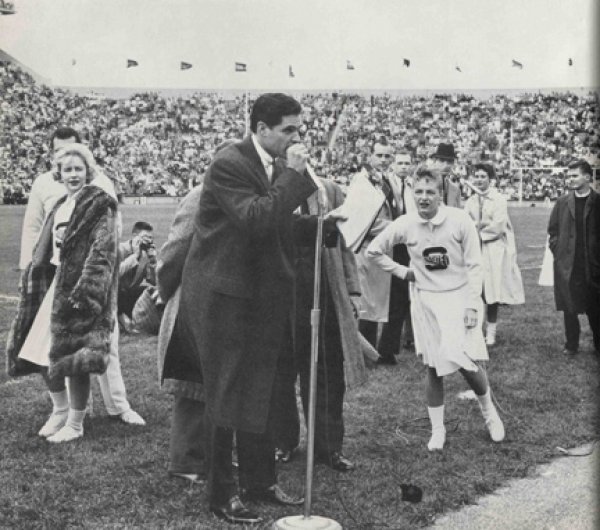 No, that can’t be right.

Spartacus was a humble slave who broke out of gladiator school, gathered a slave army and fought the fat cats of imperial Rome. He wore burlap, probably was a socialist, and never pulled rank on his ‘brothers.’ It wasn’t his style to hail or be hailed.

So what did Cy Stewart yell at the top of his lungs?

“I could swear it was ‘Hail, Spartacus,’” Stewart said.

Through a haze of 51 years, Stewart, a criminal science professor at MSU, struggled to remember what he and 76,000 other Spartan football fans were asked to scream before the October 17, 1959, football game pitting MSU against Notre Dame.

Back when Stewart was a sophomore, a Hollywood publicity stunt gave MSU a strange distinction. Just before kick off, actor John Gavin (Julius Caesar) and a sound crew from “Spartacus” led the crowd through a series of noises to use on the film’s soundtrack.

“They wanted us to scream as loud as we could,” Stewart said.

Stewart and his 76,000 co-stars did yell the words “Hail Spartacus,” but not together.

Ed Busch, an archivist at MSU, ran across some memorabilia from the game this spring. He enshrined the papers in a display case at Conrad Hall to mark the 50th anniversary of the film’s release.

“Yours will be the most thunderous offstage dialogue in the history of motion pictures,” thundered the press release. “Never before have the shouts and cries of 76,000 people been reproduced on the screen by 76,000 people.”

“It was fun,” Stewart said. “We thought it was kind of nice to have Hollywood come to Spartan Stadium for a movie called ‘Spartacus.’”

As “Spartacus” producer/star Kirk Douglas wrote in his autobiography, “It’s only natural for Spartacus to go to the Spartans for help.”

To settle Stewart’s mind, here is the role the Spartans played, according to the press release.

“Hail, Crassus!” was used in a scene where Romans suck up to their new dictator, played by Laurence Olivier.

Then Spartan fans switched sides to play the slave army crying “On to Rome!” and “Spartacus, Spartacus!”

In the film’s most famous scene, the defeated slaves are asked to identify their leader or be crucified.

In a heart-rending show of loyalty, they all get up and yell “I am Spartacus!” A tear runs down Douglas’ cheek in one of the classic moments in cinema. Spartan fans gave voice to that, too.

Finally, the MSU crowd was asked to provide “shouts and noises of an army in combat.”

“You had to get a little testosterone moving and scream as loud as you can,” Stewart said.

The instructions given the crowd tapped deeply into the Spartan spirit: "You are going into battle to win, giving voice to the same emotions you feel when your team comes on the field, confident of victory," Gavin told the crowd. But he cautioned against anachronisms that would jolt the audience out of ancient Rome: "No yippees, no yays, and, please, no ’Charge!’ Just a roar of excitement." There’s one more “Spartacus” principal who recalls MSU’s role in the film, and at 93, he didn’t ask for any slack.

“I remember well the Michigan State University cheer in ‘Spartacus,’” Kirk Douglas wrote in a letter to City Pulse last month. “It added vitality to the picture.”

“I can’t believe we are approaching the 50th anniversary of Spartacus,” he mused in the letter. “That makes me an old man.”

“Spartacus” was a landmark film for many reasons, including its resonance with the Civil Rights movement and open treatment of homosexuality. (Olivier seduces slave boy Tony Curtis in the bath.) It was also director Stanley Kubrick’s first mega-budget film, even though he later complained he wasn’t in full control.

The cast was one of the finest ever put together, with Douglas, Olivier, Curtis, Charles Laughton and Peter Ustinov, who won an Oscar.

The film also made history by giving on-screen credit to screenwriter Dalton Trumbo, then blacklisted for alleged communist ties.

Douglas won plaudits for his gentle, strong performance and hard work as producer, but he’s most proud of crediting Trumbo.

“To me, at this time, the most important by-product of ‘Spartacus’ is that we broke the blacklist,” Douglas wrote in the letter to City Pulse.

Back in 1959, Douglas wrote to MSU athletic director Clarence “Biggie” Munn, thanking him “for everything you did to make our acquisition of the sound track material for ‘Spartacus’ so easy and so pleasant.”

Douglas also refrained from taking any credit for the Spartans’ 19-0 victory.

"I would like to think that the ’Spartacus’ yells before the start of the game resulted in that happy score, but I guess all the credit belongs with Coach [Duffy] Daugherty and the team."

“All my best wishes to Michigan State University and to the readers of City Pulse,” Douglas wrote in August 2010.