The learning journey of a new artist 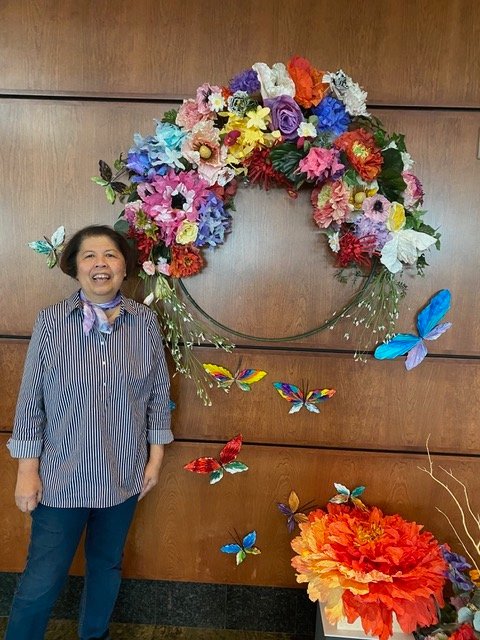 As I write my column, I am listening to the historic confirmation hearings for Judge Ketanji Brown Jackson. She is the first Black woman to be nominated for the U.S. Supreme Court. This is Black history in the making. And it's not even Black History Month.

Last month, in February, my column titled, "The Learning Ways of Black Clergy," paid tribute to the most vital, most active, most effective, most indispensable players in the freedom quest of Black Americans, going all the way back to 1619.

It was published with one of my little drawings of blue-skinned people that I have filled two notebooks with over the pandemic. It was suitable, if not literal; not meant to represent either of the two clergy persons whose learning ways were described.

Rather, the drawing of a human with outstretched arms and a downcast chin, but direct eyes, evoked a mood. It seemed to suggest Jesus, though there was no cross, or hill, or heaven.

How lucky I am to be able to have a place to display my art. Not all beginning artists do. But with support from my publisher, I applied for an art grant from the East Lansing Arts Commission, and I got it.

Almost as soon as the commissioners voted, my proposal for three spring shows fell apart. I'd been scheduled for The Public Gallery in the Hannah Community Center, but the COVID-spike undid that. Their next open date was August. My project period ends June 30.

The COVID-spike also seemed responsible for the MSU Broad Art Lab closing February through March, but then it closed for good, canceling my show in May. I don't know why it closed. A City Pulse report by Larry Cosentino on the 10-year anniversary of the Broad Museum detailed some of the background challenges there.

I needed to renegotiate my show at the East Lansing Public Library. Space has been tight there since the repurposing of its gallery operated by the Friends fundraising group. Thank goodness the eye-catching brick wall gallery near the big front windows remains, but recently, the Friends reaffirmed the fundraising purpose of that space.

So, there I was, scrambling like a student who could not register for required courses for their major. I combed the City of East Lansing for replacement venues, and new arrangements.

If only I was an MSU alumnus. The beautiful Union building gallery is open only to students and alumni. The art school also operates the city-owned (Scene) Metrospace, at 110 Charles Street. An invitation for local artist exhibits is written on the front windows, but as soon as the current exhibit of MSU critical race studies artist-in-residence, Dan Paz, ends Friday (April 1), another show is going right up.  And that's the case into summer.

As any student knows, just when you think you have studied enough, up pops another all-nighter. Bring on the vat of Red Bull.

Or they host art as an event. Before the pandemic my church, All Saints Episcopal on Abbott Road, hosted the popular Potter's Guild sale of ceramics.

The big new building on Ann Street ushered in two new exhibit locations. The showcase in the pedestrian underpass of the building is curated by the National Alliance of Mental Illness, Lansing, but how to get in touch quickly? The store-front Foster Coffee Co. has no system for hanging art yet. Push pins secured lightweight fiber weavings on exhibit in March.

Across the street at Blue Owl Coffee, art hangs in the window. On a clothes line. Yep. And they use clothespins to hold up unframed work, and S-rings for framed art. This ingenuity also marks the art curated by Siso Dhladhla as being among the newest of the new.

Coming up for air, I craved the respite of Saper Galleries and Custom Framing. Of East Lansing galleries, private or public, Saper Galleries is the oldest. It's been on Albert Street for 42 years.

Owned and operated by the same committed individual, Roy Saper, Saper Galleries is a world class gallery which has hosted major exhibits including Picasso, Rembrandt and Hebron Glass. People lined up down the block to see the Dr. Suess exhibit. Maybe one day I will be among the 150 artists exhibiting there, but right now I just want to ace my first grant.

With its 59-year-old juried art festival, East Lansing was the logical place for newbie artists like me to test my new interest. However, the city itself falls short on spaces where a fledgling artist can exhibit. Unless they are perfect in their arrangements.

And the creek don't rise.

Every student knows and dreads group work. Yet, that seems to grow the arts in Greater Lansing. I am happy to recognize Lansing Mayor Andy Schor's Arts & Culture Commission on its announcement of a plan for a downtown performing arts center, which may provide room for the Lansing Art Gallery. Not soon enough for me, but I solved my show venue problem.

Dedria Humphries Barker, a Lansing   resident, is the chairperson of The Andrew and Mary Jane Humphries Foundation, and the author of a book about education for girls, Mother of Orphans: The True and Curious Story of Irish Alice, A Colored Man’s Widow. Her opinion column appears on the last Wednesday of each month.