Where the wild books are 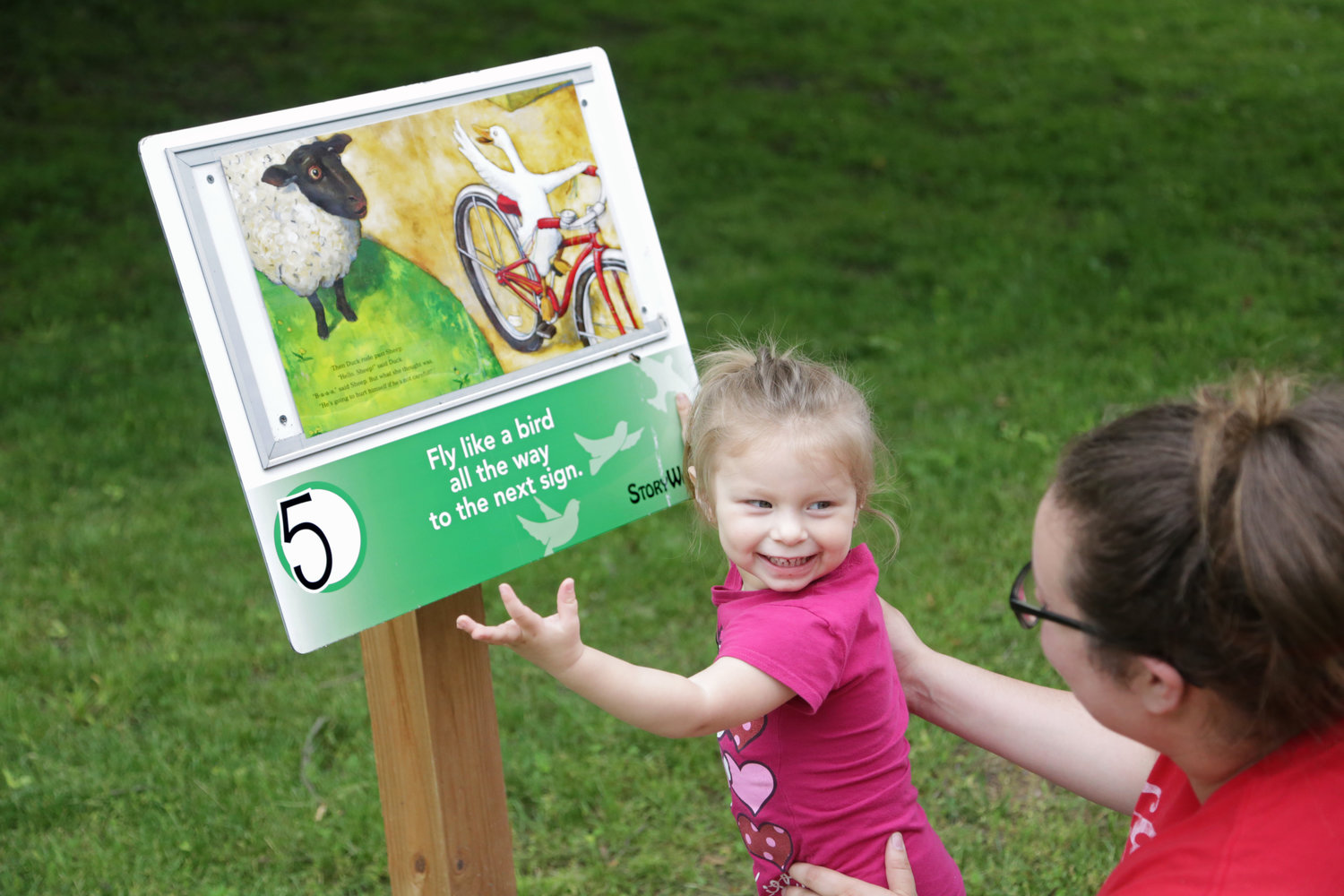 Thanks to the Capital Area District Library, Ingham County parks have morphed into literary jungles where parents can take their children on a reading safari — far from smartphones and video games.

Since 2016, CADL has installed 11 reading and walking areas called StoryWalks sites. Each stop encourages parents to get their kids outside while enhancing early literacy skills.

The concept, which is a national copyrighted program, is quite simple: Children’s story books are mounted and displayed on signposts that parents and children can read while exploring local parks.

Duimstra said the StoryWalks are just one part of CADL’s ambitious summer goals for area youth.

“The idea is to combat what is called the ‘summer slide,’ where students lose literacy skills over the summer,” Duimstra said. “The project is one of the many reading programs we run throughout the summer, including the Summer Reading Challenge, which encourages summer reading. Last year, the summer program saw 5 million minutes read. This year, we are targeting 10 million minutes.”

National studies underline this concept showing that reading just four to six books during the summer can help alleviate the “summer slide.” Duimstra said parents and children can still sign up (at cadl.org) for the summer reading challenge, which runs through Aug. 6. The program, which also encourages people to read to others, is all-inclusive from infants to adults. A bonus: Participants are eligible for prizes awarded throughout the summer.

“I took part in a summer reading program as a kid and it had a huge impact on me,” Duimstra recalled. “The StoryWalks and the Summer Reading Program help underline the importance of reading a book and limiting screen time.”

(Writer’s note: In grade school in Bay City, I signed up to read 50 books one summer and received a lapel pin from the Bay City Public Library, which I still cherish.)

Visitors to StoryWalks parks can view a variety of books for young readers, including: “Pete the Cat: Five Little Ducks,” “Splat the Cat,” “In the Tall-Tall Grass,” “The Three Little Pigs” and “Plant a Pocket of Prairie.” Duimstra added: “We also assure that the books have diverse characters and diverse stories.” Duimstra said the spotlighted books are periodically swapped out between sites drawing from a collection of about 50 carefully curated children’s books. To do that, CADL breaks three books apart for each walk and places the actual pages under Plexiglass mounted on wooden posts. Typically, there are 17 reading signs for each book, and each follows a walking path.

He added that each path costs $2,000 to $6,000, depending on the complexity of the site and there has only been one instance of vandalism (at the Lansing Riverwalk) since the initiative began.

In addition to the actual pages of the children’s book, each sign suggests activities that can be employed while walking from one sign to another. For example, children can be encouraged to sing a song while hiking to the next location.

The original StoryWalks concept was copyrighted by Anne Ferguson of Montpelier, Vermont, who developed the program in 2007 to get families outside and reading. By 2016, the first StoryWalks was installed at Haslett’s Orlando Park at the suggestion of then-head librarian at Haslett, Ann Chapman, who is retired.

National studies show that nearly 500 libraries across the country offer hiking, walking and reading programs with sites as varied as lagoons and greenways — even downtown business districts. In Boone, North Carolina, local businesses posted the StoryWalks stories in storefront windows. In Brooklyn, a library posted up special StoryWalks reading signs for Latinx month. Since its inception, StoryWalks has developed sites in all 50 States and 11 other countries as well.

As for local spots, all participating park sites have free access except for Hawk Island, which requires an Ingham County Park fee.

Get your Phil and more