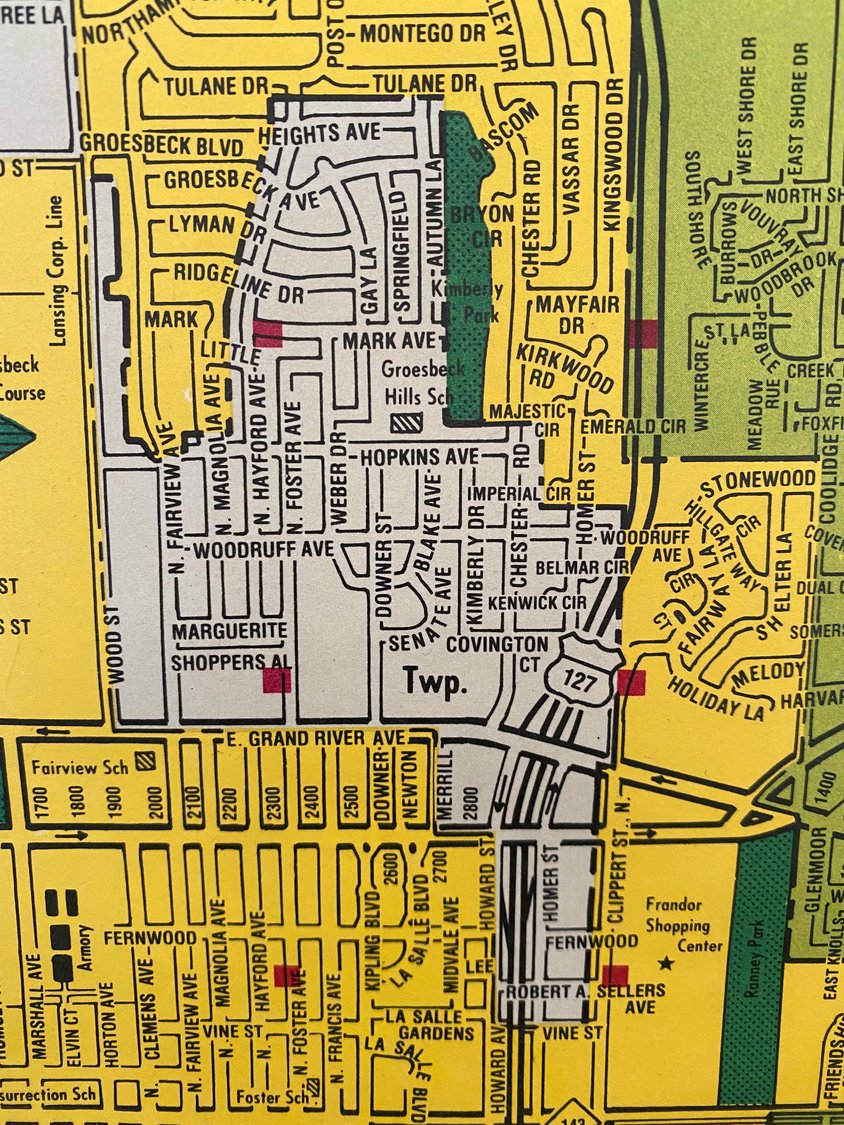 The area in gray is a part of Lansing Township that some residents want to be annexed by the city.
Todd Heywood/City Pulse 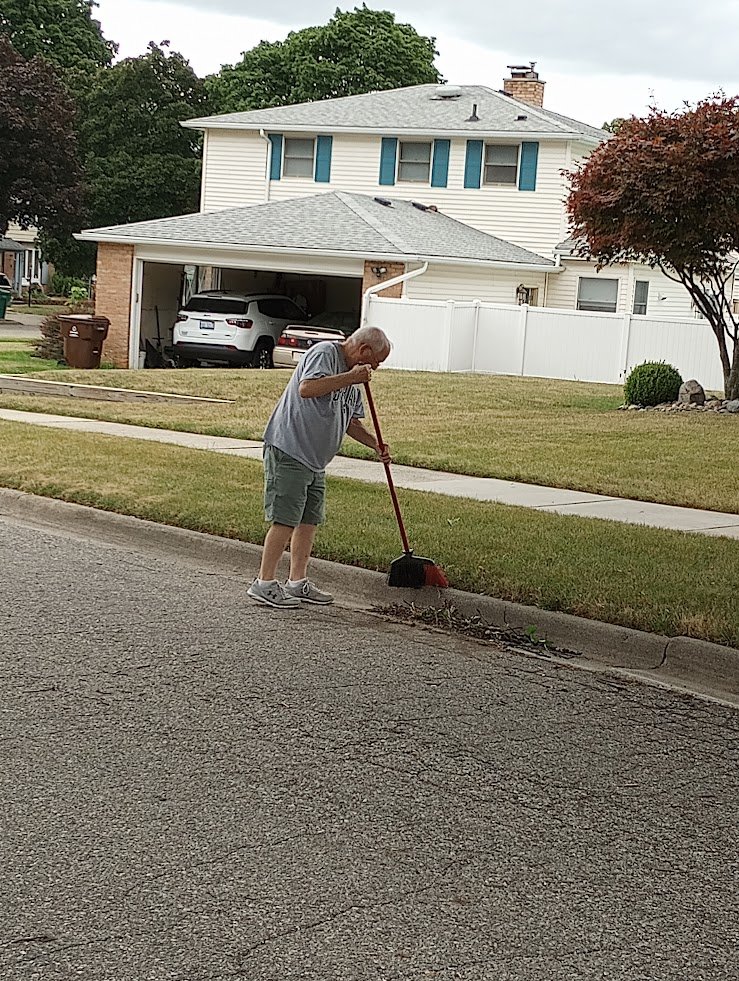 Dave Thompson sweeps in front of his home in Lansing Township. Citing higher taxes he’d have to pay, he opposes being annexed by the city of Lansing.
Todd Heywood/City Pulse
Posted Thursday, August 4, 2022 12:00 am

The township is believed to be around $31 million in debt owed in bonds and interest, due over 20 years. ”
Todd Heywood

Jerry Gilson was finishing yard work Sunday afternoon. The 73-year-old woman has lived in Lansing Township for 22 years in the Groesbeck area known as the “island.” That’s because it is surrounded on all sides by the city of Lansing, making it a singular oddity in a charter township that is spread over five noncontiguous land areas.

Next week, the Lansing City Council will consider whether to give Gilson and her 2,200 or so Groesbeck neighbors an opportunity to vote this November on being annexed by the city, as requested by 122 of those residents in a petition to the city last month.

Asked what she thought, Gilson paused her sweeping and considered the question. “I am satisfied with living in Lansing Township,” she said after a minute or so. “City taxes are too high. Particularly for some like me on a fixed income. So, I don’t really see a good reason for it.”

As Gilson was being interviewed, a lanky, balding man approached. “I signed that petition,” he said.

Asked why, he said, “With the debt, the taxpayers are going to get dinged badly.”

The debt he is referring to is from millions of dollars in bonds the township backed in an ill-fated deal to build a retail space called the Heights at the far northern end of Eastwood Towne Center. Despite rosy projections of 80% occupancy in the retail area, it has never climbed above 30%. Lansing Township has been struggling financially for over a decade.

The township is believed to be around $31 million in debt owed in bonds and interest, due over 20 years.

“Those debt issues are going to be solved,” said Treasurer Kathy Rodgers, with an affirmation by Supervisor Maggie Sanders. “In about six months, the township’s financial outlook is going to be completely different.”

Neither could explain more, citing attorney client privilege related to an ongoing lawsuit with the estate of developer Mike Eyde over $11 million it says it is owed. He died in 2019, and the township is battling over the Heights and ultimate control of it.

A taxable value is half the assessed value of a property. In an example provided by Rodgers of a house worth $150,000, its taxable value is $75,000. In Lansing Township that equates to an annual tax bill of $1,182. In Lansing, the annual bill on that same example house would be $1,458.

“If the city mills stay the same, the additional taxes for our sample house would be $276 plus income tax,” Rodgers said. City income tax is 1 percent for residents and a half a percent for nonresidents. Townships cannot levy an income tax.

But if Lansing voters approve of a 3.9 mill increase for 30 years to pay for the public safety proposal that will be on the ballot in November, taxes on Rodgers’ sample house would climb about $150 a year.

Moreover, Ingham County Treasurer Alan Fox said that the current special assessments related to the township’s long-term debts would follow the properties to the city of Lansing. Lansing would have to collect those taxes, as well as city taxes on those properties.

However, Lansing Mayor Andy Schor said that if the annexation goes through, he would propose that the city pay the township’s special assessments for the newly annexed residents.

Rodgers and Sanders are mother and daughter. Sanders took over as supervisor in the township earlier this year when De’ontrae Hayes left abruptly for a position in another state. Sanders was elevated to supervisor from clerk. Rodgers came out of retirement to take on the part-time job of treasurer after multiple searches failed to find a resident qualified and willing to take the post.

Rodgers lives in the Groesbeck area — the only township official in an elective office impacted by the proposed annexation. But both Rodgers and Sanders think annexation is a bad idea for the residents.

For affected Lansing Township residents to have an opportunity to vote on annexation, the Lansing City Council must approve language to forward to the Ingham County clerk to put on their ballots. To make the November ballot, six of the eight members of the Council must approve it by Aug. 16. As of last week, only two Council members supported putting it on the ballot: Peter Spadafore and Patricia Spitzley.

“Is there a stronger word than annexation?” Spadafore quipped.

Spitzley said, “In fact, I am good with us taking (the township) completely.”

The remaining six — Jeffrey Brown, Adam Hussain, Carol Wood, Jeremy Garza, Brian Daniels and Brian Jackson — all said they needed questions answered before they could commit to the annexation. Jackson said he was leaning toward it.

If it reaches the ballot, a simple majority of “island” voters favoring annexation could make it a reality. Ingham County Clerk Barb Byrum estimated 1,827 people were registered to vote. Rodgers said the number was about 2,000.

But the battle for annexation may be uphill because of the concern about higher taxes.

City Pulse approached 20 people in the Groesbeck neighborhood of Lansing Township on Sunday. Most declined to talk about the annexation, or were caught while taking a walk in the neighborhood but actually lived in one of the city portions of Groesbeck.

An individual who didn’t want his name used laid into the township leadership and the burden of the taxes and special assessments that have flowed as a result of the bonds for the Heights.

Yet, despite his anger, he is not keen on being annexed into the city, citing the increased tax costs. “No, thanks,” he said.

As the sky darkened and storm clouds began to roll in from the west, Dave Thompson, a 20-year resident of Lansing Township, was busy sweeping the curb line the street to remove sticks, leaves and other debris. After his kids left, he and his wife decided it was time to move from their Lansing home. An opportunity arose with the house they are living in now — a two-story house with a garage and a large picture window facing out onto the street.

“So, we decided to take the chance,” he said.

As for the annexation, he’s opposed.

The debt the township is wrestling with “should never have happened,” he said. “Whoever’s in charge of it messed up.”

Despite these flaws, he said an annexation would hit his wallet. “That means our taxes are going up. We don’t need that,” he said. “We don’t need everything going up like we have going on now.”