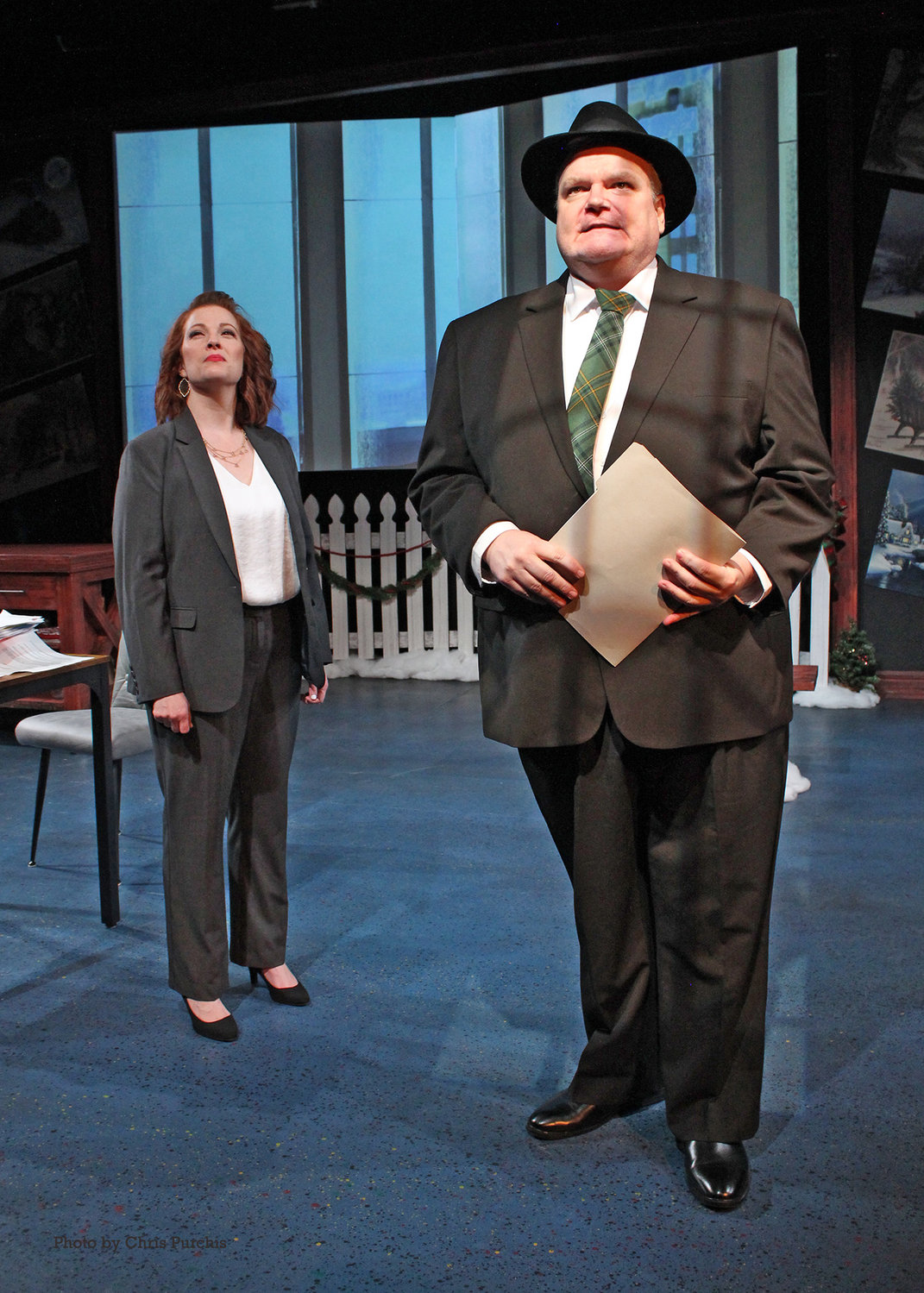 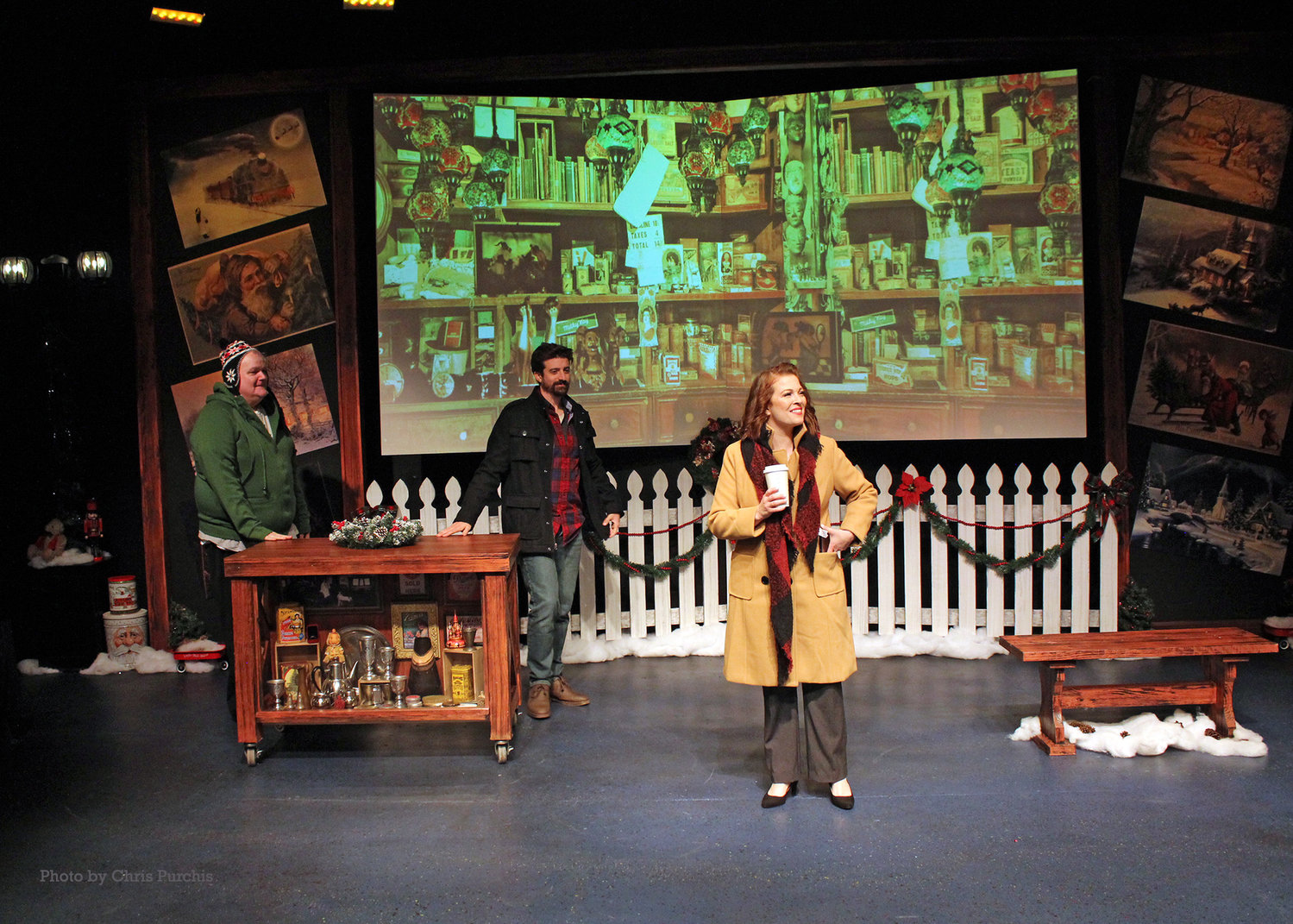 It’s time to publicly recognize that the Williamston Theatre owns Christmas. Consider some past triumphs, including Aral Gribble’s one-man “A Christmas Carol: The Radio Show,” John Lepard’s one-man show “This Wonderful Life” as well as the many seasons that featured “Every Christmas Story Ever Told.” This year, the theater’s production of “A Very Williamston Christmas” puts a star on the top of the Williamston tree of entertainment.

“A Very Williamston Christmas” is a mischievous parody of Hallmark Channel holiday movies. One does not need to be an aficionado of those movies to enjoy the production. Having the shallowest understanding that Hallmark movies are romances with beautiful people and predictable, feel-good plots will suffice. Of course, those with more familiarity will experience more hilarity as the hallmarks of a Hallmark movie play out.

Felice (Dani Cochrane) is a career-oriented woman who eschews celebrating the holidays with family to focus on her career. As fate would have it, her boss, Mr. Eared (Joe Bailey), offers her a promotion if she can acquire a certain property in her hometown of Williamston during the Christmas weekend. She returns home to do so and runs into an old high school crush, the handsome widower George (Ryan Patrick Welsh). Felice becomes torn between advancing her career and following her heart.

While the program does not explicitly denote that this new play is a world premiere, it stands to reason that “A Very Williamston Christmas” must be so, and quite frankly wouldn’t make sense to be produced anywhere else. The script is chock-full of inside jokes that poke loving fun at Williamston, Lansing and the greater Lansing area. Clearly, playwright Robert Hawlmark has great affection for the area.

Hawlmark? Pronounced like the aforementioned channel that has created hundreds of cookie-cutter holiday movies? It seems like more than a coincidence. In fact, Robert Hawlmark is the poorly-kept secret nom de plume of Williamston Theatre co-founder John Lepard. Rather than starring in a Christmas production this year, he sat behind the keyboard and wrote a smart and funny vehicle to test the stamina of other actors.

In particular, Bailey and Emily Sutton-Smith are revved up as they embody multiple roles. Sutton-Smith plays Felice’s mom; her best friend, Barb, and an old woman who wanders the park. Bailey exhibits even more range as the evil Mr Eared; George’s father; George’s 8-year-old son, Danny, and Felice’s fiancé, Jack. Both actors embrace the lunacy of the role changes, and the script acknowledges this lunacy with a wink and a smirk.

The cast often breaks the fourth wall and engages the audience in the ridiculousness of the parody. Welsh smolders as Williamston’s own “McDreamy” and makes sure everyone feels the heat as he casts mesmerizing gazes at Felice every time he leaves the stage. On opening night, the cast frequently broke, choking back chuckles as they emoted all over each other. Rather than being a distraction, this brought the audience even deeper into the joke.

“A Very Williamston Christmas” is as sweet as Felice’s Christmas cookies, as scrumptious as George’s tousled hair and as comforting as the warm buzz from Mom’s beloved peppermint schnapps. It is the perfect holiday treat.