Meet the two finalists gunning to be Lansing’s next top cop.

Schor to announce next police chief after final interviews next week 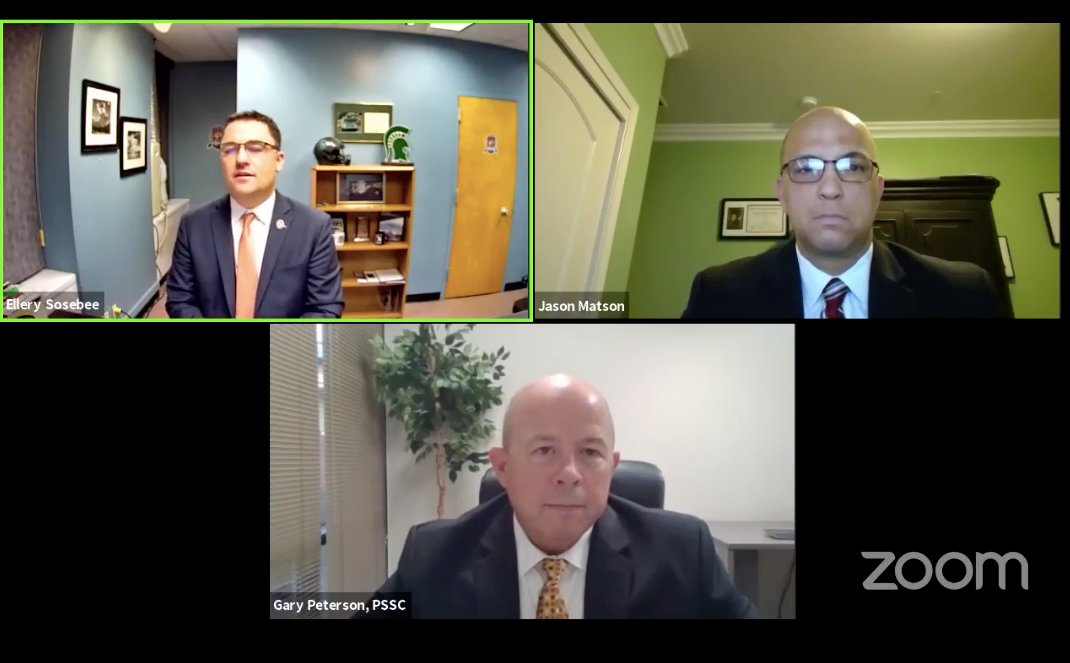 WEDNESDAY, Nov. 24 — The search for next chief of the Lansing Police Department is down to two candidates, with Mayor Andy Schor set to conduct final interviews on Tuesday and announce a permanent successor to former Police Chief Daryl Green by as soon as the end of next week.

The two finalists  are Interim Lansing Police Chief Ellery Sosebee and Jason Matson, a captain at the Bakersfield Police Department in Bakersfield, California. Both spent about 90 minutes at a virtual public forum last night explaining why they each think they’re best suited to become the Capital City’s next top cop.

The two emerged from a field of 20 applicantswho responded to a  $40,000, three-to-four-month national search conducted by the California firm Public Sector Search & Consulting. No salary has been announced, but Green was paid $117,000 annually.

The forum can be rewatched in its entirety here. But in the meantime, here are some highlights:

Sosebee, 45, took over as interim chief in June after Green, 54, took another six-figure job as chief of staff for Michigan State University Police Chief Marlon Lynch. Sosebee graduated from Michigan State University with a bachelor’s degree in criminal justice before landing his first police officer job in Meridian Township in 1999. In 2002, he became a road patrol officer at the Lansing Police Department and climbed the ranks from sergeant to lieutenant to captain, a position he held since 2019, before rising this year to top brass.

In his opening remarks, he noted that since graduating from the police academy, he had always known that he wanted to work for the Lansing Police Department — in part because of its reputation for high officer standards and a longstanding commitment to community engagement.

He took a police officer job in Bakersfield in 2002 and has remained there ever since, rising from sergeant to lieutenant to captain — just like Sosebee’s track record in Lansing. Last April, Matson was among three finalists to apply for the police chief job in Bakersfield, but he was passed over in favor of another internal candidate, Bakersfield Assistant Chief Greg Terry.

At last night’s forum, Matson described the Bakersfield Police Department to be much larger than that of Lansing — with more than 500 sworn officers covering about 150 square miles there compared to about 200 officers covering about 40 square miles in Lansing. Bakersfield’s police budget is also roughly three times larger than Lansing’s police budget, Matson explained.

In his opening remarks, he noted that he viewed recent nationwide criticisms of police officers instead as opportunities to work directly with the local community, build relationships, create meaningful “forward-thinking” change and also “bring forward policing into the modern day.”

“I’m a visionary leader. I’m a critical thinker and I believe in collaboration,” he said, noting that he also enjoys traveling the world to interact with and learn about different cultures and ways of life.

Matson said the Police Department must focus on “root issues” to make a real impact on crime — with an emphasis on education and community partnerships. And the only way to have a strong recruitment and retention program is to assemble a Police Department that reflects the community, he said. Matson said Lansing has “done well” in hiring a diverse roster of officers, but he said he still wants to bring on more women and people of color. He also said that he wants to ensure those minority groups have an opportunity to rise to leadership positions.

Matson also plans to have “difficult conversations” with the residents about racial inequities.

Sosebee quickly recognized that racial disparities exist within the criminal justice system and that “in some cases” police reforms may be necessary. But he also noted that his officers “have never been more diversified and unbiased” than they are today. He also labeled the latest batch of newbie police recruits as the “most educated, tolerant, accepting and intolerant to racism.”

“Once we get the best human beings that we can get, the thought of systematic racism will stop. That’s not going anywhere in the near future. I’m a realist,” he added. “Once we start policing by the community, for the community and with the community, we’ll make leaps and bounds toward this equity. I think it’s being recognized and it’s not tolerated anymore. People are just fed up.”

Matson said officers must recognize that every human being has implicit biases — which is “critical to understanding the basics about what emotional intelligence is all about.”

“We cannot allow ourselves and our biases to override our better judgement or to suppress what another person is feeling,” he explained, noting that once police officers recognize their implicit biases, they’re able to learn, understand and empathize with others on a much deeper level.

“Once you understand all of these things, you can be a better officer. You can go out there and treat people with fairness and appreciate where they’re coming from,” Matson said, noting that he hopes to bring in training programs that lead to open minds, critical thinking and impartiality.

Sosebee said he wants to maintain the Lansing Police Department’s long standing diversity and sensitivity training program while also continuing to educate officers on how to identify and control their emotions, so as not to “escalate something into something it shouldn’t be.”

“We also need to get more active listening training,” he added. “We listen to understand. We don’t listen to respond. We need to have a higher level of empathy and show the community that we’re there to listen to them and help them — because that’s what we’re really there for.”

Matson said Bakersfield, California, is filled with reckless drivers on most weekends. His multi-faceted strategy includes connecting with business owners to prohibit loitering in parking lots — which he said could help reduce gatherings that turn into illegal street races at night.

He also suggested “targeted enforcement” including speed wagons and camera equipment to monitor known hotspots for reckless driving. Matson also mentioned the possibility of partnering with a private race track to create a space for residents to race instead of the city’s streets.

Sosebee said that a decrease in traffic enforcement amid the early days of the COVID-19 pandemic triggered an uptick in reckless driving and speeding that has only worsened. And while the city is “rounding the corner” on solving the problem, there’s still “a lot” to do, he said.

By using targeted enforcement along busier thoroughfares and posting cops up in highly visible stretches where reckless driving is known to occur, he hopes to make the streets safer this year. More speed wagons and traffic calming devices — like speed bumps — could help, he said.

“The biggest thing is we need the officers out there to do it,” Sosebee explained, noting that he plans to “restructure” the way calls are handled to allow for more officers on road patrol shifts.

Matson labeled gun violence as a “complex issue that’s not going to be addressed overnight.” But his plan includes tackling some of the root causes of cyclical violence — including high rates of unemployment, low levels of educational attainment and an absence of community programs.

He said it’s also important to bring in trained clinicians, like social workers, instead of cops to help provide support to those who are most likely to get involved with gun violence — assisting people by connecting them with mentors and counselors to prevent violence from beginning.

Like the rise in speeding and reckless driving, Sosebee also blamed the COVID-19 pandemic — as well as a nationwide increase in gun sales — for a subsequent increase in gun violence. The solution rests in “strengthening the current policies that we have,” he explained, noting that there needs to be a stronger line of communication between the public and the police as well as more after-school activities for local teens who don’t otherwise have much to keep them busy.

“Lansing has a violence problem, but what Lansing really has is a gun problem,” Sosebee added, noting that continuing to seize an influx of illegal guns from the streets and educating people about the consequences of their actions will be paramount to stopping the next shooting.

Matson, however, said there’s value in considering a potential “reallocation” — like the possibility of hiring three social workers next year instead of one road patrol police officer who are better equipped to handle calls related to mental illnesses, substance abuse or homeless.

Sosebee said that “it’d be nice” to have 50 more police officers on staff, but he also sees a “large value” in hiring social workers and other trained clinicians for a more “holistic response.”

A spokesman for Schor’s office said that neither Sosebee or Matson has been asked about their race because, as an equal opportunity employer, race is “not a factor” in the hiring process. At last night’s forum, Matson noted that his father was a Nigerian immigrant who was recently deported, but otherwise didn’t elaborate on his race or ethnicity. Sosebee also didn’t mention his race.