Need pills for pain? Some doctors say lay off the weed 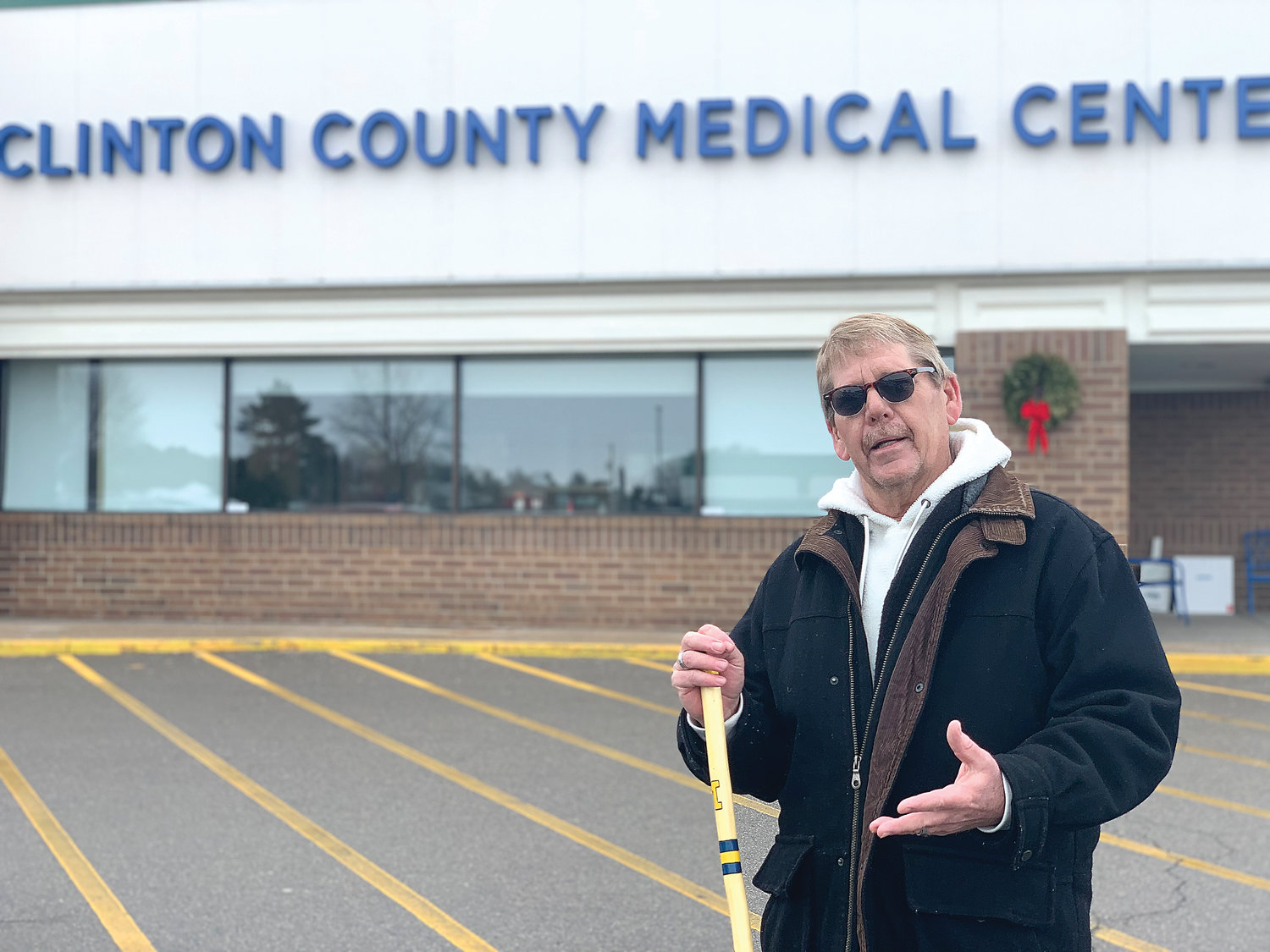 Doug Barnes has battled with chronic pain for most of his adult life. And his doctor refuses to help him.

Barnes, 62, of St. Johns, suffers from gastrointestinal bleeding. He has seen dozens of local doctors, undergone several operations and been prescribed a litany of powerful painkillers in recent years, he said. Gummies infused with THC have helped him cope with discomfort too. But they’ve also cut off his supply to any other drugs.

His doctor’s ultimatum: Either stop taking the gummies or never receive another prescription pain pill again.

“He told me he couldn’t prescribe me anything until I tested clean from marijuana,” Barnes said. “I couldn’t get anything for pain, stress, sleep or anything. I was flabbergasted because it’s really been helping me. Plus, it’s legal in Michigan. It’s really like the new wine here in Lansing, but my doctor apparently just doesn’t see it that way.”

Restrictive policies at Clinton County Medical Center in St. Johns — where Barnes was denied access to painkillers — are common across the state. Like many other patients, they’ve forced him to choose between opiates and marijuana. And marijuana advocates contend it’s a decision that patients should never have to make.

“Physicians often make you choose between their medications or cannabis,” explained Rick Thompson, owner of the Michigan Cannabis Business Development Group. “It’s been a struggle. These doctors are in constant fear of losing their ability to prescribe these drugs, and it can put them at odds for what works for the patient.”

Doctors can ultimately use their discretion to decide what’s best for their practice. Even after marijuana was legalized for adult use in Michigan, many physicians — including some in Greater Lansing — have outright refused to allow their patients to smoke weed while taking prescription opioids to manage their chronic pain.

And prescription policies vary widely from doctor to doctor.

Physicians at McLaren Health Care in Lansing don’t care if their patients smoke pot. A spokesman said they would typically have no reason to screen patients at all. And if they did, their tests wouldn’t detect marijuana.

No specific policies exist at Sparrow Health Care, but a spokesman said it’s “standard practice” to require patients to agree not to “mix substances.” There, it’s all about doctor discretion. Physicians are “always at liberty to make decisions about whether a medication is appropriate for patients to ensure their safety,” a spokesman explained.

Other local pain management clinics — like one operated by Dr. David Nebbeling off Lake Lansing Road —are more friendly to the therapeutic benefits of weed. His office doesn’t necessarily condone pot smoking, but he’s certainly not denying prescriptions to patients who choose to consume it, a spokeswoman explained.

But many others across the state are taking a more hardline stance against marijuana. Barnes’ doctor in St. Johns, for example, contends weed can be terribly addictive and dangerous when combined with certain opiates. Patients at his office are usually forced to choose between getting prescription drugs and using any type of THC.

“We won’t do it. The combination has never been tested,” said Dr. Andrew Messenger, owner of Clinton County Medical Center and a doctor at Sparrow Clinton Hospital in St. Johns. “When a physician prescribes something, we have to be able to document that it will not cause harm. That’s our mantra: Do no harm.”

“If I don’t know what a medication or the combination of medications is going to do, how can I do that?”

Messenger agreed to meet a City Pulse reporter in an exam room at his office earlier this month. He first attempted to obtain a urine sample from this reporter, explaining that if I tested positive for THC, it would tell him that I could not be objective. However, after I declined, he still was was willing to elaborate on his restrictive policies.

Marijuana is addictive and its interactions with painkillers are unknown, he argued.

“Anytime you use two controlled substances that are habit forming, the risk of addiction skyrockets,” Messenger explained. “We still believe in pain medication. We’re in the pain business. We want people to be comfortable. A lot of people say they smoke pot for pain. Well, if you want to treat your own pain, you treat it your own way.”

Messenger will prescribe painkillers for traumatic injuries — like “if a bone is sticking out of your leg,” he said — but otherwise he sends away pot-smoking patients that suffer from chronic pain without any treatment at all.

“We’re not cruel, but at the same time, marijauna is still federally illegal,” Messenger added.

The American Academy of Family Physicians last year released research that indicates marijuana may have some therapeutic benefits, but also recognized possible “negative health outcomes” associated with cannabis use. Its interaction with painkillers hasn’t necessarily shown positive results. But it hasn’t been proven dangerous either.

The Centers for Disease Control and Prevention always encourage doctors to test their patients’ urine before prescribing any controlled substances at all — but only for illicit substances that have proven implications for treatment. And the medical community is still largely undecided on how to handle marijuana.

“There is just so little scientific clinical research to show the benefits or the health risks on both sides of it,” said Dana Lawrence, communications director for the Michigan Academy of Family Physicians. “Physicians, understandably, are hesitant to counsel patients on whether they should be doing this. We just need some more research — especially on the interactions — before we can really be comfortable giving out advice.”

Guidance issued by the CDC in 2016, however, appears to point doctors in a more pot-friendly direction.

“Clinicians should not test for substances for which results would not affect pain management or for which implications for patient management are unclear,” according to a statement from the CDC. “For example, experts noted there might be uncertainty about the clinical implications of a positive urine test for THC.”

In short: The CDC doesn’t want positive urine tests for marijuana to stand in the way of pain management.

But still, doctors like Messenger contend they know better. The uncertainty of marijuana’s interaction with other substances (like oxycodone and hydrocodone) warrant their hesitation, he said. After all, narcotics licenses for physicians are issued at the federal level. And marijuana is still listed as a Schedule I controlled substance.

“I’m not aware of those guidelines,” Messenger added. “If they are there, they’re not right.”

Thompson, an avid cannabis smoker, has also had his own struggles with obtaining prescription medication. He said he recently visited an emergency room in Royal Oak over blinding migraines, but because he also smoked marijuana, his doctor refused to offer him a prescription — instead only offering simple oxygen therapy.

And those restrictive policies have made it difficult for cannabis smokers to get the treatment they deserve.

“These doctors are all concerned they’ll be penalized by the federal government,” Thompson added. “The solution is de-scheduling cannabis on a federal level. Some doctors might be more lenient, but that’s the only sign that will be a universal message to physicians in all 50 states. Anything else would only be a half step.”

A spokesman for the Michigan Department of Licensing and Regulatory Affairs noted there are no general provisions in state law that would prevent a doctor from denying painkillers to pot-smoking patients. Complaints can always be filed, but in the absence of regulation, they’re not likely to generate results.

“We have no oversight of individual physicians or medical offices where physicians practice,” he explained.

Dr. Lisa Lines, an instructor in quantitative health sciences at the University of Massachusetts Medical School, said it’s past time for doctors to stop testing for marijuana. She published an article in 2017 calling for change.

“Testing for THC — and dumping patients that test positive — presents plenty of risks for patients: barriers to access to care, lack of adequate pain management, and disruption in care continuity, for starters,” Lines wrote. “Instead, doctors should consider the evidence for marijuana as a potential therapeutic partner in treating pain.”

Lines said one of her close family members had also been taking prescription opioids for 15 years and wished she could use mariuana for her pain, largely because she knows from experience that it works. But her pain clinic tests for THC twice a year, and will cut her off from addictive medications if she ever tests positive for pot.

“This is just one battle in the ongoing civil war in the medical community over pain,” Lines wrote. “Time will tell whether the ongoing global marijuana legalization experiment will ultimately be a boon, a bane or both.”

But “encouraging signs” exist, Lines said. States that have medical marijuana dispensaries have seen a relative decrease in opioid addictions and deaths. Doctors, it seems, just need to be more willing to release the pharmaceutical stranglehold that opiate manufacturers continue to have over the medical community.

Larry Ashley, a faculty member and addiction specialist at Central Michigan University, said medical schools across the U.S. — including CMU — still don’t train students about medical marijuana at all. And unless the federal government takes a stand, patients like Barnes will likely be left to shop around between conflicting physicians.

“The pendulum swings,” Ashley added. “It’s a problem, and until we do more legitimate long-term research and the federal laws get on board, we’ll probably continue to have this type of thing. We’re in a drug conflict with state and federal laws, and if it ever comes to a battle, federal laws will always supersede the state.”