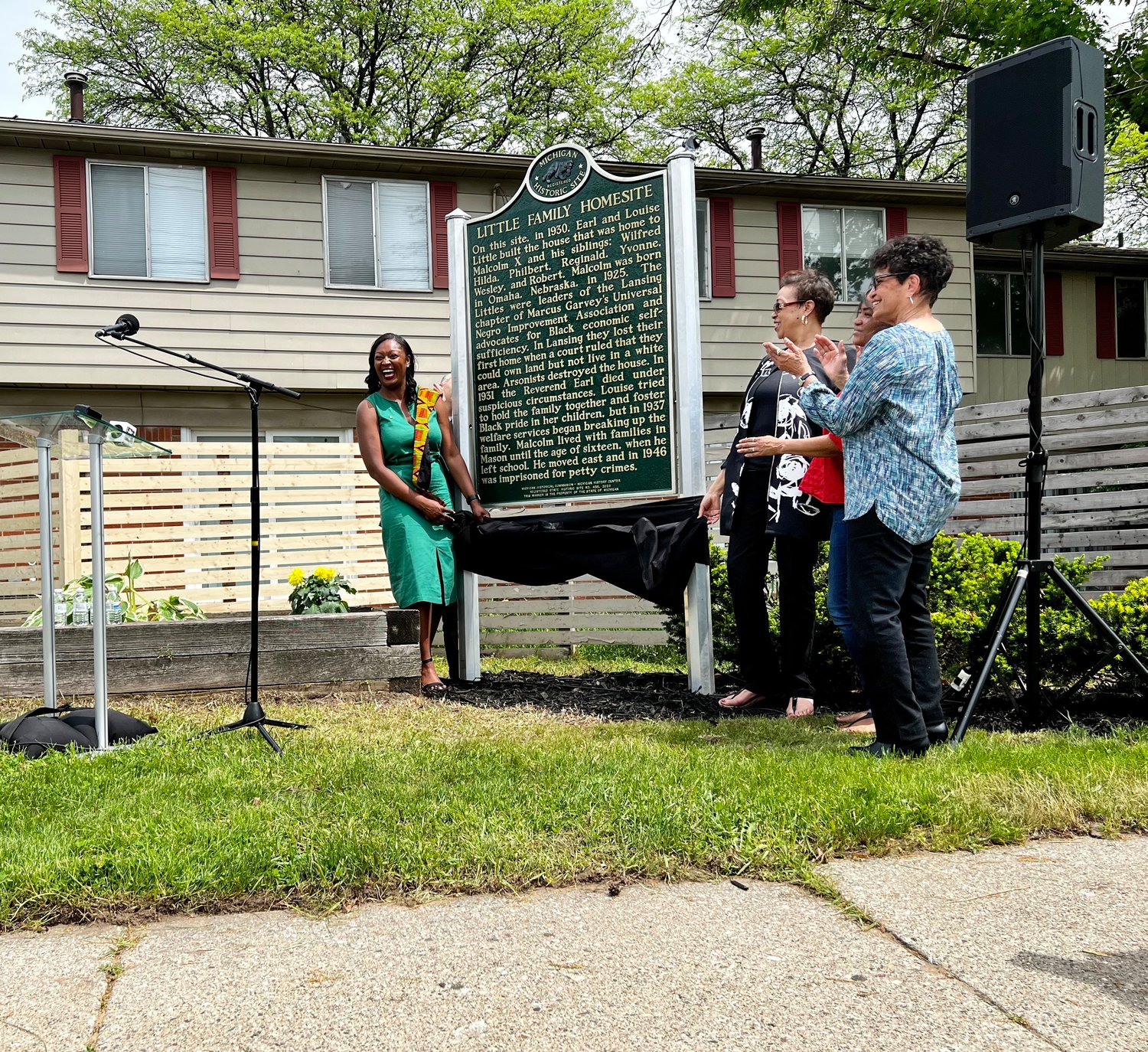 FRIDAY, May 20 — A historical marker that once designated the childhood home of Malcolm X in South Lansing has finally been replaced (and refurbished with some new memorial language) after an errant driver reportedly plowed down and destroyed the metallic tribute sign last March.

State Rep. Sarah Anthony, Lansing Mayor Andy Schor, members of Malcolm X’s family and other state and county officials gathered today to unveil the refurbished state historical marker at 1003 Vincent Court in Lansing, which was replaced through fundraising efforts spearheaded by Anthony with support from the city of Lansing, the Greater Lansing Historical Society, the Michigan Historical Commission, MessageMakers and Ferguson Development, among others.

“We never truly celebrated and honored the legacy that Malcolm X had here in the Capital City,” Anthony told several dozen people who gathered for today’s rededication ceremony. “We didn’t have big luncheons, events and parades that celebrated the history of a civil rights icon and what he meant to our mid-Michigan community. Today, we are reframing his legacy here in Lansing — by not only repairing the marker, but working alongside his family to get it right.”

The working theory: It was rammed overnight by a truck — likely on March 7, 2021. The Lansing Police Department doesn’t have any records of the incident. A spokesman there told City Pulse there was never a call for service reported at that location, either for a car crash or vandalism.

But ever since, local preservationists and politicians have been working to get it replaced. And since Malcolm X’s birthday was on May 19, it panned out smoothly for a belated birthday tribute.

“We don’t do enough to talk about who was Malcolm Little and who later became Malcolm X, the impact he had on the world, the country — starting right here in Lansing,” Schor said. “It’s tremendously important that we recognize that. We have to remember Malcolm’s story.”

The old marker — first erected in 1975 at 4705 S. Martin Luther King Blvd. — had noted that Malcolm lived on the site in the 1930s and that his early life was “marked by the violent death of his father, the Rev. Earl Little, on the Michigan Avenue Streetcar tracks.” The marker also states that “under severe economic stress the family was separated, and in 1937, Malcolm was sent to Mason.” It had also described the world-renowned civil rights leader’s life after Lansing.

“His time in Lansing is critical to who he became. Lansing is in his blood,” Anthony said, noting that she grew up in Regency Apartments, which were built on the site of Malcolm X’s old home.

And since she saw the marker every day, ensuring a proper replacement was erected was “personal.” She also said she worked alongside members of Malcolm X’s family to craft some new language that would serve as a more “historically accurate” reflection of his life in Lansing.

The home, which has since been demolished, was the Little family’s third in Lansing.

When he was 4 years old, Malcolm X’s father reportedly bought five plots of land on Grand River Avenue and Alfred Avenue in the Westmont subdivision. At the time, only white people were permitted to live in that subdivision, so the company that owned it sued to remove them.

The court ruled to evict them, but before the family could move out, their home was burned down by the Black Legion, an organization of white supremacists active in Lansing. The family also briefly lived on Charles Street near the border of East Lansing while Little built the house.

The family moved there in 1930 and Malcolm enrolled in Pleasant Grove Elementary School. The next year, his father was killed. Local cops formally declared his death a suicide, which resulted in the family’s insurance company refusing to pay out on the death. Welfare workers later declared Malcolm’s mother, Louise Little, mentally unstable and she was later committed to a facility for psychiatric treatment. Jones said she was forced to stay there for at least 26 years.

“This always bothered our family because she was not mentally insane,” Jones said, noting that Louise Little was able to return home to Lansing before moving to Detroit, where she died in 1989.

“How his mother was treated after his father passed away and split his family apart and institutionalized his mother — that all played a role in shaping his voice,” Anthony explained.

“Even as a kid it felt odd that we weren’t uplifting Malcolm the same way we were with Martin Luther King,” she said. “With this marker, I am on a bit of a mission to change that. We’re in a time right now when there is a yearning for real history. They’re yearning for honesty and real conversation. And a part of that has to start with us having a reckoning around Lansing’s role.”

Yesterday would’ve been Malcolm’s 97th birthday. He was assassinated in 1965 at the Audubon Ballroom in Harlem, New York. Three Nation of Islam members were convicted in his murder.

In full, the old historical marker for Malcolm’s former homesite in Lansing had read:

“Malcolm X, born Malcolm Little in Omaha, Nebraska in 1925, lived on this site in the 1930s. His early life was marked by the violent death of his father, the Reverend Earl Little, on the Michigan Avenue streetcar tracks. Under severe economic stress, the family was separated, and in 1937, Malcolm was sent to Mason. After a public school teacher discouraged his ambition of becoming a lawyer, Malcolm at fifteen, left for Boston and New York. He became involved in street crime and was arrested in Massachusetts. In prison he was converted to the teaching of Elijah Mihammad and read widely in history and philosophy. He also developed an understanding of black self-hatred and came to see his years in Lansing as common to black experience. Released in 1952, he joined his family in Detroit, and began his new life as a Muslim. When his talent for preaching was recognized, he moved to New York to head Temple Seven. He founded the Nation of Islam’s weekly newspaper, Muhammad Speaks, and traveled the country orgnanizing new temples among its followers. In 1959 a television program brought him to public attention as the principal minister of the Nation. Preaching black pride and autonomy, he openly articulated the extent of racial discontent in our society. He broke with the Nation in 1964 and founded Muslim Mosque, Incorporated. A trip to Africa in the same year helped him enlarge his thinking on international problems. By 1965 when he was assassinated, he had become an eloquent spokesman for the oppressed everywhere. His influence continues through his recorded speeches and The Autobiography of Malcolm X, a landmark of twentieth century social thought.”

“On this site in 1930, Earl and Louise Little built the house that was home to Malcolm X and his siblings: Wilfred Hilda, Philbert, Reginald, Yvonne, Wesley, and Robert. Malcolm was born in Omaha, Nebraska, in 1925. The Littles were leaders of the Lansing chapter of Marcus Garvey’s Universal Negro Improvement Association and advocates for Black economic self-sufficiency. In Lansing they lost their first home when a court ruled that they could own land but not live in a white area. Arsonists destroyed the house. In 1931 the Reverend Earl died under suspicious circumstances. Louise tried to hold the family together and foster Black pride in her children, but in 1937 welfare services began breaking up the family. Malcolm lived with families in Mason until the age of 16, when he left school. He moved east and in 1946 was imprisoned for petty crimes. While in prison Malcolm Little started reading history and philosophy. Guided by his brothers, he began following the teachings of Elijah Muhammad and the Nation of Islam (NOI). After his 1952 parole, he used the names Malcolm X and Malik-El-Shabazz. He achieved global prominence as an NOI preacher and spokesperson. In 1964 he left the NOI and founded the Muslim Mosque Inc. and the nonsecretarian Organization of Afro-American Unity. Converting to the Sunni faith, he made a pilgrimage to Mecca. Malcolm X’s commitment to articulating racial discontent, building Black pride and self-sufficiency, and organizing for human rights began with his family and grew to encompass the oppressed throughout the world. He often visited Lansing and his Michigan family members. He and Betty Sanders were married at the Lansing courthouse in 1958. He was assassinated in 1965.”

This coverage includes details that were previously reported by Melodee Mabbitt.