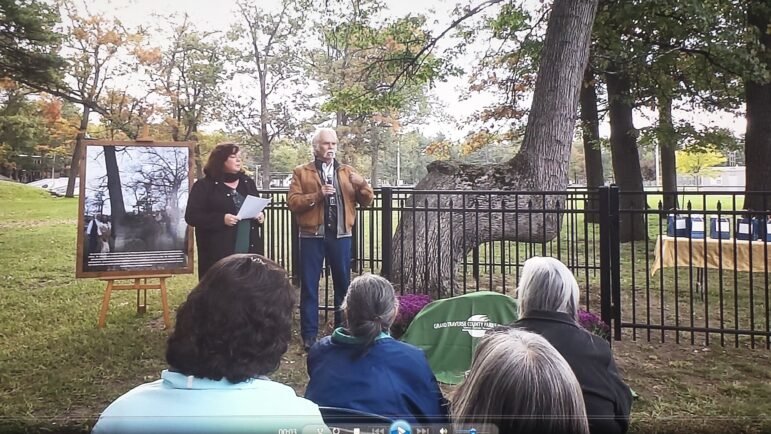 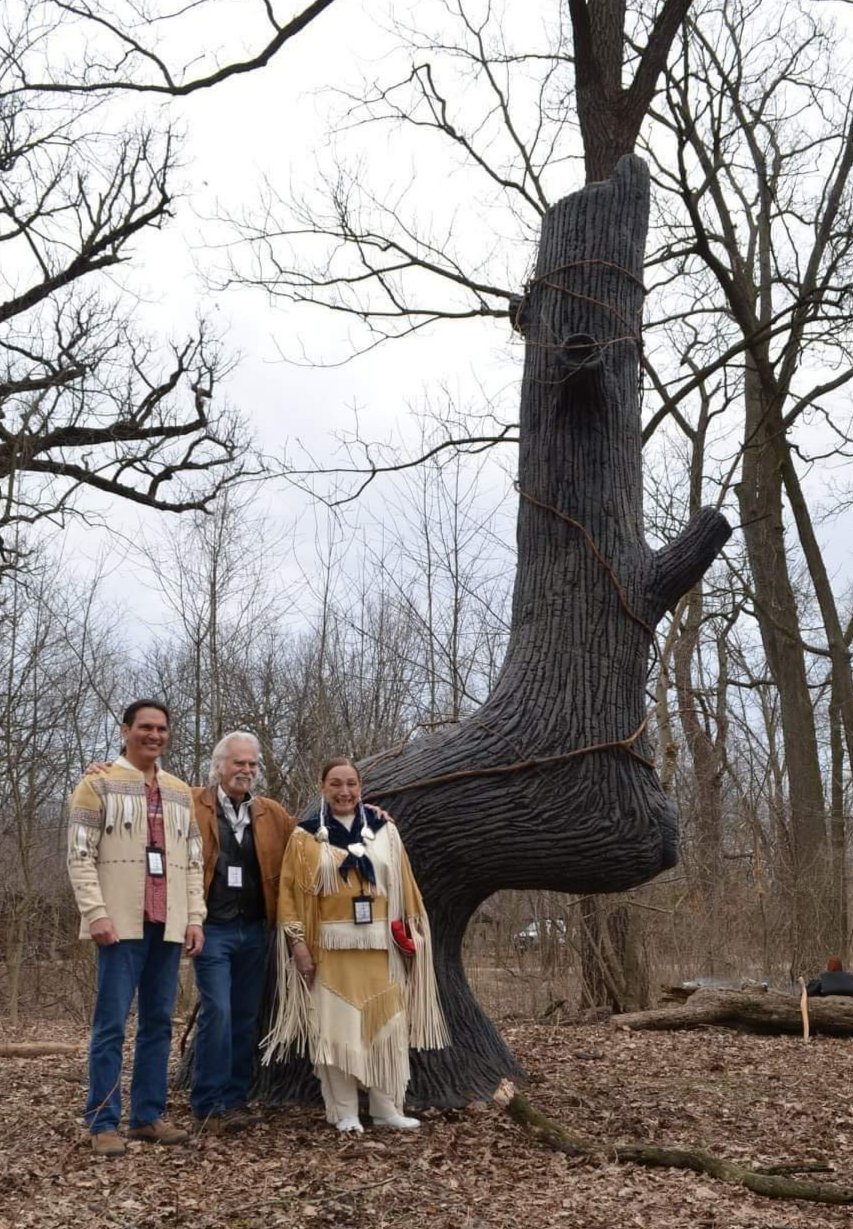 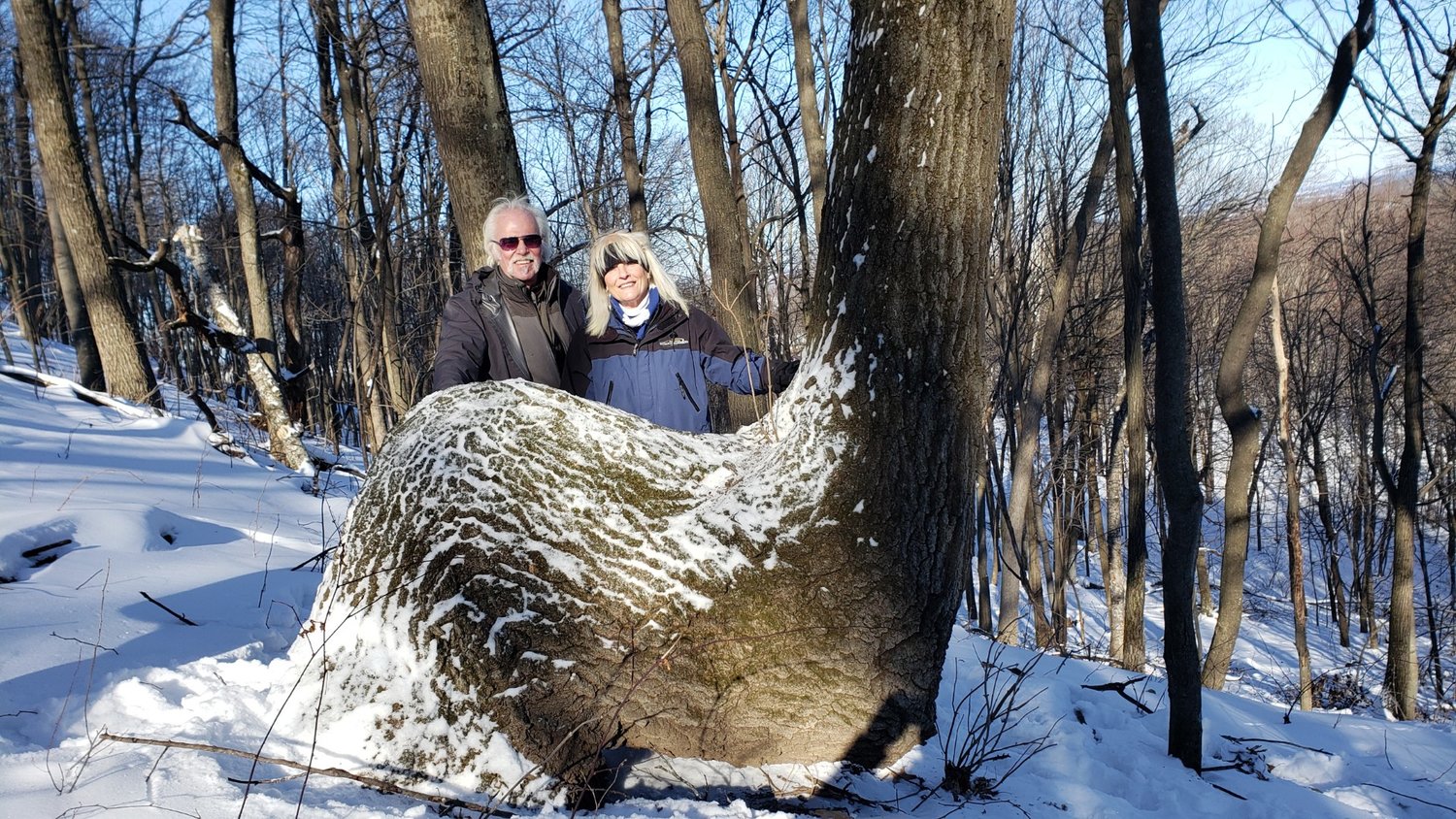 The more than 200-year-old sign is a tree bent as a sapling by Native Americans to mark the north/south trail through Michigan.

And it’s among the trail marker trees throughout the Great Lakes region that Illinois artist and author Dennis Downes has spent a career identifying and working to preserve.

You likely won’t forget the first time you see one, said Downes, 71.

“That’s the neat part about it,” he said. “Almost everyone I’ve taken to obscure trees, they can usually tell me what they were wearing, and what time of year it was, even 30 years later.”

These directional markers once signaled such things as where to cross a river and where to enter and exit trails. Sometimes a tribe might use one as a decoy to mislead other tribes.

The distinctive, large trees look unnatural in the wilderness, resembling the number four.

They were formed by bending saplings and securing them in that position until the tree was mature enough to hold that shape. There are likely only a few hundred original trail trees left in the Great Lakes area, Downes said. Some are over 200 years old.

Finding them is difficult. Most of the thousands of trees he has visited in the Great Lakes are not trail trees. To find them, he had to open his eyes in new ways. The search is like the strategies that he was taught to hunt deer, he said.

“You have to look for something horizontal in a vertical world,” he said. “Then you can start reading the landscape at a quick pace.”

The trees were extremely important to the Native American way of life, Downes said.

“People paid a great deal more attention because your life usually depended on these things,” he said.

Downes has helped maintain the connection between Native Americans, their ancestors and tribal nations of the past, said Andrew Johnson, the executive director of the Native American Chamber of Commerce of Illinois.

“What he has shown is that those treasured items are still here today and should be understood and recognized,” Johnson said. “He’s helped instill the knowledge from the past, to keep it at the forefront (of our minds) for us today.”

There is growing interest in such efforts. The Traverse City tree in the Grand Traverse County Civic Center Park was fenced and marked with an inscribed boulder in 2016, said John Chase, the county director of parks and recreation. But it is also a focus of a park improvement plan that would increase its visibility with interconnecting trails.

“A big component (of the planned improvements) is to rebuild the north end of the park and bring more honor to the tree and its heritage,” Chase said.

Downes first heard about the trail trees from his Native American aunt when as a boy he wanted to know more about his heritage. There was little to no research on the trail trees then, which made him even more curious.

“It was like there was a void,” he said. He was determined to fill that void and became infatuated with the trail trees. He worked to bring their history to light, despite discouragement from adults and teachers.

“The more I learned, the more (I found that) I didn’t know enough,” he said.

Each year he wrote a paper on what he had learned. After compiling 28 years of papers, he decided to write “Native American Trail Marker Trees: Marking Paths through the Wilderness.” Published in 2011, it costs $90 and can be found on Amazon and at many retailers. It contains photographs and illustrations by Downes.

He also founded the Trail Marker Tree Society so that people across the United States and world could read about his work.

“I just think it’s an incredible use of natural resources in our area,” Downes said. “I didn’t want that concept to disappear.”

His travels connected him to his ancestry and helped other Native Americans learn about their heritage.

“I proved to them their role in history,” he said.

Downes, who lives in Chain O’Lakes, Illinois, is a full-time artist who mostly paints landscapes of the Great Lakes region. He uses the profits from his paintings to fund his trail tree work.

While fans have said he should focus more on his art, he distributes brochures about the trail trees at every art show and event he is involved in. He takes part in and organizes many trail tree replanting events to bring awareness of the trees and he landscapes the area where they grow to ensure they look presentable.

“I like pointing out the clever things Native Americans did,” he said. It is a point he often reiterates.

“I try to end my talks by taking my hands, spreading my fingers, and pushing them together and explaining that we should all be together in everything we do,” he said.

His goal is to create permanent sculptures of the trail trees so their history cannot be forgotten. Downes has built four such sculptures across Illinois. Each is accompanied by a plaque that he wrote explaining the trail tree history.

One sculpture is at the Lake County Discovery Museum, another is at the American filmmaker John Hughes’ estate in Hebron. One is at The Grove in Glenview, and another is in Antioch on Main Street.

He is looking for a home for a fifth sculpture he has recently completed.

“What a neat concept to help educate people and never have it fall out of history again,” he said.

Downes battles colon cancer with the same positive attitude he brings to his trail tree work. He wears a black vest and white shirt to chemotherapy sessions “to try to inspire other people not to just put a hoodie on and crawl in the corner,” he said.

“I’ve had a great life,” he said. “I’ve done more than I ever thought I would have been able to accomplish, so I try not to be sad about being dealt a bad hand.”

He hopes that his brochures, speeches and sculptures inspire others to also dive into the rich history of the trail trees.

“I’m planting seeds across the country and later those seeds will turn into trees and bear fruit,” he said.