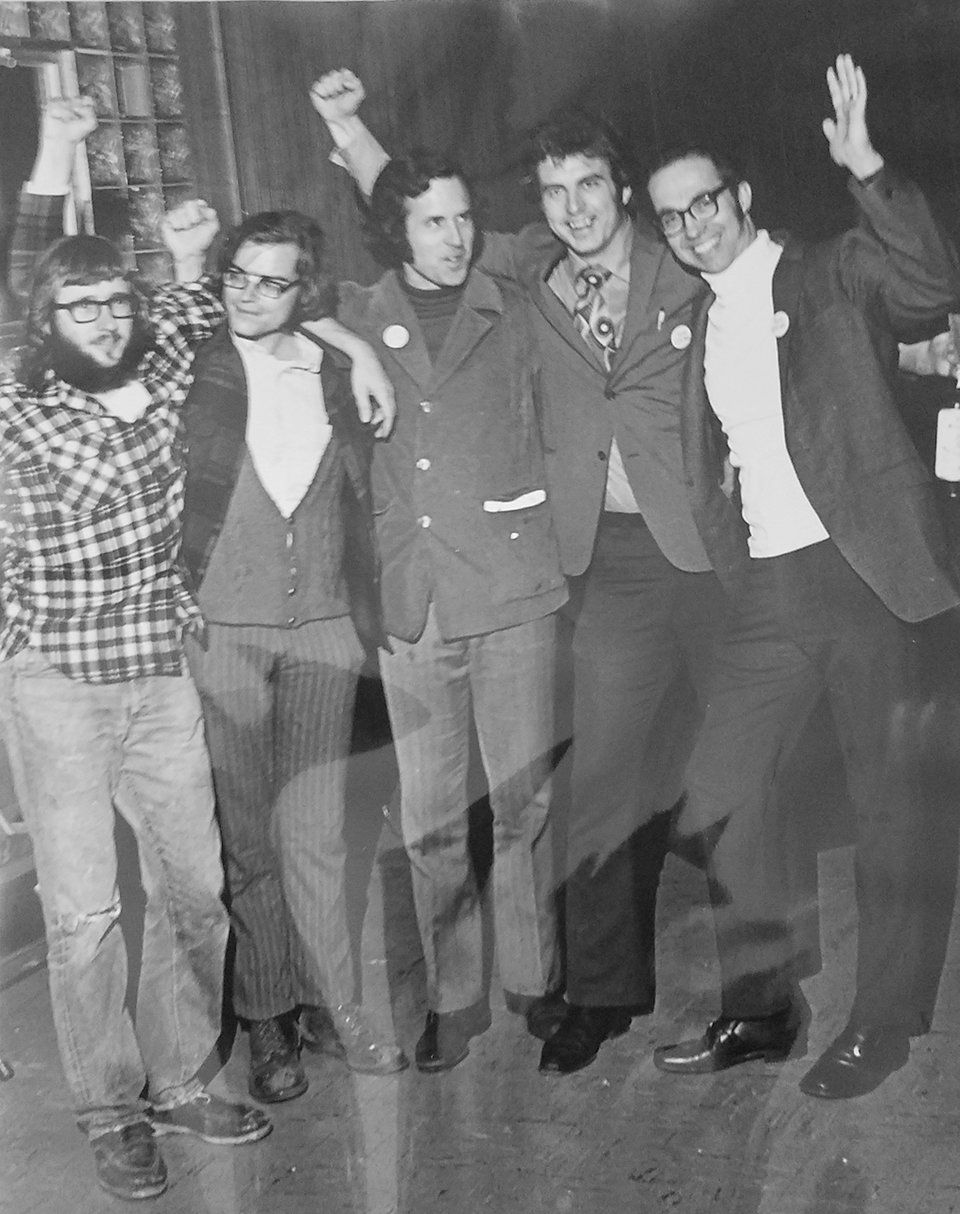 Behind the upset: Fifty years ago, these five men were part of a student movement in East Lansing that turned the City Council upside down. From left: write-in candidate Chuck Wills; unidentified; candidates George Colburn and George Griffiths; and campaign manager Neal Colburn.
Courtesy
Posted Wednesday, November 3, 2021 12:00 am
BILL CASTANIER

Bill Castanier, a frequent contributor to City Pulse, is president of the Historical Society of Greater Lansing.

The ubiquitous political yard signs dotting front lawns of East Lansing homes started coming down today. It wasn’t that much different 50 years ago when the hotly contested races for East Lansing City Council were in full throat competition. Three upstarts, George Colburn, George Griffiths and Charles W. Wills, faced off against a 10-year veteran of Council, Mayor Gordon L. Thomas, incumbent Ccouncilman Wilbur Brookover (whose son George, was on the 2021 ballot) and three other candidates who were close to the business community for three open seats on the five-member Council.

Normally, the business-backed candidates would have rolled into office, but the student revolution of the 1960s got a boost when the Michigan Supreme Court ruled the previous summer that 18-year-olds could vote in elections where they attended college. And did they vote. Griffiths and Colburn won by wide margins especially in the heavily student precincts. Griffiths and Colburn were the front-runners with each having 3,000 more votes than Mayor Thomas, who finished fourth. Brookover squeaked in when Wills’ write-in campaign failed.

Early in the campaign, Griffiths and Colburn, who were 42 and 33 respectively, recognized the importance of the student vote and worked closely with voter registration groups to register more than 8,000 student voters. The winning candidates, who had dubbed their campaign “Project City Hall,” worked through the summer on strategy and fund raising. By the time students returned in September, they began an aggressive campaign on campus. Hundreds of youthful volunteers worked tirelessly to support Griffiths and Colburn; most likely the first time they worked on any political campaign.

Colburn’s younger brother, Neal, was the lead campaign worker, but he was bolstered by former State News editor Linda Gortmaker, who helped galvanize 300 student volunteers. Their opponents pretty much thought they would ride their name recognition into office, but a subsequent article about the election in Time magazine titled “Student Power in East Lansing” pointed out succinctly it was “no sure thing.”

In just one student dominated precinct Griffiths and Colburn put the election away, totaling more than 3,000 votes each over Thomas.

History provides us with some lessons. Despite facing registration difficulties, the student vote triggered a victory. Today, we are learning, once again, how important voter registration efforts are and how a particular demographic can sway an election. We are watching how two thirds of the states have enacted or proposed legislation to restrict voting rights. I wonder if a similar effort to Project City Hall would be successful today and how many roadblocks would be erected to keep students from voting.

Griffiths and Colburn knew early on that their path to victory was through students who until this time had had no impact on East Lansing government. Although headlines the next day in the Lansing State Journal claimed “liberals” won the election, in reality neither Griffiths or Colburn was far left, but they successfully ran against business as usual. It had only been five years since the Council dragged their feet on desegregating East Lansing, and that issue was still brewing along with a proposal to put a cross campus expressway through the heart of campus which through the efforts of the new Council was nixed when MSU President John Hannah sent a letter to the U.S. secretary of transportation opposing the expressway path. Griffiths and Colburn are also remembered for shepherding through Council a local ordinance protecting the rights of gay employees and a $5  fine for possession of marijuana.

It’s hard to imagine the MSU campus with an expressway cutting through it, but it might have happened without the student vote.

Griffiths who went on the be active in the ACLU, died last year, Colburn who received his Ph.D. at MSU, moved on to a successful career as a documentary filmmaker who directed documentaries on Eisenhower and most recently Ernest Hemingway.

Colburn, who lives in northern Michigan, hosted a reunion on election night Tuesday recognizing that victory 50 years ago.

Colburn said he planned to buy the first round.