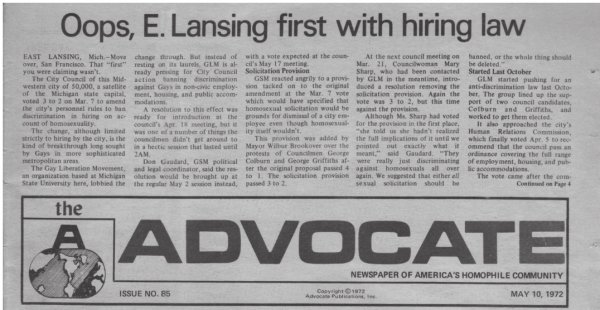 Two score years ago, after hearing from an angry resident who didn’t want to pay the city $11 for mowing his vacant lot and before taking up the matter of an abandoned easement, the East Lansing City Council made national human rights history.

On March 7, 1972, the Council voted to “employ the best applicant for each vacancy on the basis of his qualifications for the job and without regard to race, color, creed, national origin, sex or homosexuality.”

The modest personnel rule became a national landmark in the history of gay and lesbian rights.

At a ceremony Tuesday, East Lansing’s City Council was scheduled to proclaim itself as “the first community in the United States to ban discrimination based on sexual orientation.”

The notion that East Lansing is the national birthplace of gay rights made George Colburn, one of four Council members who voted for the rule in 1972, laugh out loud. (The vote was 4-1 with Robert Wilcox casting the no vote.)

“Being the first to make it happen was not a driving force,” he said. “I felt we were being progressive at the time, and representing a majority viewpoint in our community, but I had no idea it was breakthrough legislation.”

But several sources back up the city’s claim.

The May 10, 1972, issue of The Advocate, then a newspaper and today a magazine, called the rule “the kind of breakthrough long sought by Gays in more sophisticated metropolitan areas.”

“Move over, San Francisco,” trumpeted the lead to the story. “That ‘first’ you were claiming wasn’t.”

The national Parents, Friends and Families of Lesbians and Gays, or PFLAG, recognizes East Lansing as “the first city to ban discrimination against gay men and lesbians.” Frank Kameny, a leading figure of the gay rights movement, credited East Lansing for enacting “the first anti-discrimination law protective of gays, ” as he put it in a 2007 public letter criticizing Tom Brokaw for leaving the gay rights movement out of his book on the 1960s.

The East Lansing milestone became possible when two new City Council members, Colburn and George Griffiths, were swept into office in November 1971, the first general election after the national voting age was lowered to 18 in 1971. That fall, a registration drive added about 10,000 MSU students to the rolls.

Although the race was nonpartisan, “the two Georges” openly identified with the Democratic Party. Colburn, 72,  recalled that an unsuccessful write-in candidate, Chuck Wills, who “looked like a hippie,” was added to the slate to attract “alternative lifestyle people” to the polls.

“People were living and breathing politics,” Colburn said. “It was a very active campaign against the people that ran City Council for years.”

Griffiths, 82, was to receive a copy of the 40th anniversary proclamation Tuesday.

“The early ‘70s was a sea change of things that happened, especially in East Lansing,” Griffiths said. “Soon before I was elected, the city got rid of its policy that only whites could own homes in East Lansing. Then the issue came up about gays and lesbians, and I was happy to introduce [the personnel rule].”

Longtime area activist William Beachler, an officer in LGBT Alumni Association of MSU, was a volunteer East Lansing city commissioner in the early 1970s. Getting “the two Georges” on Council, Beachler said, was the key to the rule’s passage.

“East Lansing was very conservative prior to that,” Beachler said. “When I was a student in the 1960s, blacks weren’t even allowed to move off campus.”

Student involvement was fueled by a welter of issues, from the Vietnam War to “frustration with city government trying to isolate the student community rather than accommodating them,” Colburn said.

The March 7, 1972, meeting was jammed with students supporting a proposal to make $1 the maximum fine under the city’s misdemeanor marijuana ordinance. (The Council didn’t get around to the item that night.)

Prominent in the mix was the Gay Liberation Movement, a vibrant student group led by charismatic, openly gay lawyer Don Gaudard, who lobbied hard for the personnel rule and its May 1973 follow-up, a comprehensive anti-discrimination ordinance covering employment and public accommodations.

“We’d come in for City Council meetings and there would be flowers next to our microphones with personal notes,” Colburn recalled. “There weren’t pickets outside the doors or anything, but there were a lot of people willing to express their views — good, democratic principles at work.”

In May 1973, East Lansing passed its own anti-discrimiation ordinance, but housing was excluded, at the urging of East Lansing Mayor Wilbur Brookover.

Brookover and moderate Republican Councilwoman Mary Sharp (Ingham County chairwoman of Republicans for McGovern) frequently sided with “the two Georges” on hot issues, but Brookover had a squeamish streak about gays.

Beachler attended the May 1973 meeting and heard the debate over the scope of the East Lansing ordinance. “I can still hear Brookover justifying his position on housing that he was in the Navy, and he was stationed on a submarine, and just didn’t want to be forced in those kind of close quarters with those kind of people,” Beachler recalled.

It wasn’t the first time Brookover hedged his gay rights stand. After voting for the historic March 1972 personnel rule, Brookover pushed for a supplemental rule making homosexual solicitation on the job “misconduct.” The rule was adopted, even though swing vote Sharp later regretted her “yea.”

Colburn cut Brookover, who passed away in 2003, some slack.

“The whole sexual orientation debate was very avant-garde at the time,” Colburn said. “People at meetings were truly shocked when these matters were brought up. This was basically the community, and, later, the country, coming out of the closet. People had never dealt with these matters before.”

Nathan Triplett, mayor pro tem of East Lansing, helped draft Tuesday’s proclamation and anniversary tribute. The proclamation was to be presented to Griffiths and Mark Doebler, chairman of MSU’s Alliance of LGBTQ Students, the successor organization to the Gay Liberation Movement.

“East Lansing has been so supportive toward LGBT residents that people don’t even think about it,” Triplett said. “You’d be shocked at the number of residents I’ve spoken with — even folks who have been involved in LGBT advocacy — who have no idea they’re living in a community that was a pioneer.”

Today, 21 states, the District of Columbia and over 140 cities in the United States, including 18 in Michigan, prohibit employment discrimination based on sexual orientation.

While planning Tuesday’s proclamation and ceremony, Triplett’s pride in East Lansing’s 40th anniversary was mixed in his mind with “a terrible irony.”

A bill introduced in the state Legislature by state Rep. Tom McMillin in October 2011 would limit local ordinances to protecting only those categories covered under the state’s Elliott-Larsen Civil Rights act. Gays and lesbians are not protected by the law.

Triplett said the bill, if passed, would void the East Lansing ordinance and 17 others in the state.

“Here we are, marking a historical milestone of taking a stand against discrimination, while our state Legislature is considering passing legislation that in effect would legalize discrimination in these communities,” he said.

Colburn lives near Petoskey, Mich., and heads Starbright Media, a national producer of documentary films, but he is still a fan of local politics. After leaving City Council in 1973, he went on a globe-trotting career, writing and producing a large body of work, including a Disney Channel documentary on Dwight D. Eisenhower for which he interviewed Presidents Nixon, Bush, Reagan and Ford. Colburn still looks fondly on his time in East Lansing.

“Those couple of years doing something meaningful — more meaningful than I had realized — to properly register the community as a good and progressive entity, was probably one of the highlights of my life,” he said.

While on the Council, “the two Georges” became friends as well as colleagues.

“It was a close relationship,” Colburn said.

There were many wee-hour discussions at Beggar’s Banquet, the unofficial hangout for Council members and student activists.

“I was on Council at an exciting time,” Griffiths said tersely. “I can claim credit for very little of it.”

Hint: The power of second chances