A pot shop, burger, hotel and Bernero in East Lansing? 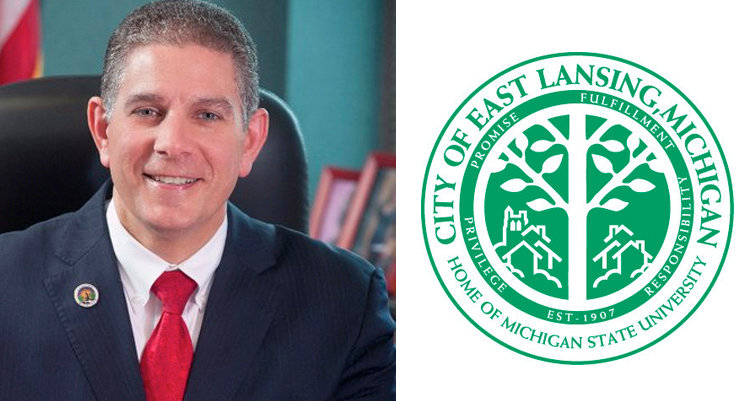 MONDAY, March 18 — Wahlburgers may be coming to East Lansing, with an assist from former Lansing Mayor Virg Bernero.

The burger chain, co-owned by actors Mark and Donnie Wahlberg and their brother Chef Paul, is part of a development proposal for a 6-acre property that the city of East Lansing — its owner — auctioned off for $1 million.

Bernero, who runs his own consulting firm after stepping down as mayor at the end of 2016, represents Wahlburgers franchise owner Nino Cutraro of Detroit and Canopy Affairs Group, a marketing and consulting firm from Denver. He recently confirmed his clients hope to partner with Kodiak Landarc to eventually launch East Lansing’s first pot shop alongside an upscale hotel and a Wahlburgers.

A Freedom of Information Act request revealed Bernero had introduced Cutraro and Chad Proudlock of Canopy Affairs Group to city officials shortly before an online auction on the property had closed. And while his clients lost the auction to Kodiak Landarc, they plan to develop a business partnership to drive the project forward, Bernero said.

“I still see this property as a gateway into East Lansing that can serve as a hub of positive economic activity for and jobs for residents and visitors alike,” Bernero said. “I believe folks will be pleased with where this ends up.”

After East Lansing’s Department of Public Works vacated the Merritt Road property more than a decade ago, local residents voted by 65 percent to sell the land for development in 2002. Offers, however, have been sparse. A previous developer request for millions of dollars in tax incentives was a swing and a miss at the City Council.

“This property was continuously up for sale for the last 17 years,” said City Manager George Lahanas, noting years of environmental contamination have largely deterred developers from the pie-shaped parcel. “The fact that it had been on the market for so long is a real reflection of some of the difficulties we’ve had on this land.”

That’s where East Lansing’s City Council decided to get creative. As officials continued to dip their toes into the lucrative waters of medical marijuana, a recently passed ordinance effectively made the property eligible for an eventual pot shop. Mayor Mark Meadows said his cellphone had been buzzing with renewed interest ever since.

And one of those calls was from Bernero.

Meadows said the former three-term Lansing mayor — along with several others who expressed an interest in the city’s burgeoning medical marijuana market — had previously called him to discuss developmental interest in the site. One fair way to pick the winner? Auction off the land to the highest bidder on eBay, Meadows said.

Meadows said city staff, given the newfound interest, decided to post the parcel online in January. It had never been done before, but the live-action bidding process offered a chance to “pit bidders against each other” and ensure the highest offer prevailed. Besides, the standard auction houses wanted a 10 percent fee, he explained.

“The objective was always to maximize the revenue there,” Meadows said. “I was comfortable with the process.”

The auction went live on Jan. 7 with a starting price of $950,000. Kodiak Landarc, after outbidding Cutraro and another bidder, won the auction on Feb. 6 for $1 million. But the quiet nature of the sale has since raised concerns over governmental transparency and whether officials might have shortchanged taxpayers in the process.

Tim Dempsey, East Lansing’s director of planning, building and development, said he notified about a dozen “interested parties” about the auction but otherwise kept the public in the dark. No formal notices were published. No discussions were had at the City Council. No press releases were sent out about the auction.

The city of Lansing, for context, mandates a public hearing a week before any public land sale and requires the city clerk to keep specific details on file for a month before any City Council vote. East Lansing appears to have more wiggle room. Dempsey said after the public votes, the City Council decides how to handle the deal.

“We weren’t sure how to go forward,” Dempsey said. “An auction came up as a way to give everyone a chance.”

And Meadows’ private discussions about the eventual purchase never surfaced until after the sale was done. Community concerns — fueled partly by speculative news coverage from East Lansing Info — were swift: Why didn’t the city do more to publicize the auction? Did the city officials squander the potential for higher bids?

“East Lansing left millions of dollars on the table. This property is worth a lot more than the $1 million that it was purchased for,” explained Ryan Basore, business development director at the recently formed Michigan Cannabis Industry Association. “The property would go for at least $3 million on the open market.”

Ingham County Commissioner Mark Grebner, who represents East Lansing, also emailed the City Council to urge it to rescind the purchase agreement given the lack of transparency throughout the process. The price might be adequate, but quietly selling off $1 million in real estate without discussion is “just insane,” he said.

Meadows argued Basore’s head is “up his own rear end.” The parcel still theoretically requires $3 million in environmental work before it can be redeveloped, he maintained. The last appraisal from 2009 valued the land and neighboring lots at $975,000, but Meadows still insists that $1 million matches today’s “fair market price.”

“It’s better than any offer we’ve had in prior years,” Meadows added, noting the City Council is still vehemently opposed to any future tax incentives to help develop the Merritt Road property. “At the end of the day, it was a $1 million offer on property that has $3 million in environmental problems. I’d say it was a fair deal for the city.”

Kodiak Landarc spokesman Jeff Yatooma declined to comment on the possibility of any future requests for tax incentives but also confirmed early discussions to partner on the project with Cutraro and Proudlock of Canopy Affairs Group. Neither Cutraro or Proudlock returned calls for further clarification.

Yatooma said the potential development plans are still forming and declined to elaborate further on the topic.

Emails obtained by City Pulse show Dempsey met with Bernero, Cutraro and Proudlock on the day before the auction closed. Bernero then urged the city to restructure the auction into a more formalized proposal process — presumably to leverage the economic development aspects of their lofty development against other bidders.

The eBay auction format instead focused the purchase entirely on one aspect: The highest bid.

Councilman Aaron Stephens has since voiced concerns about the lack of public awareness of the sale. He also recognized that a standard proposal process might have allowed the City Council to focus on other aspects of the purchase plans.

“I’m not going to say there wasn’t a better opportunity out there,” Stephens added. “We just don’t know that.”

Jeffrey Hank, an attorney and partner in a Lansing dispensary, said he would have been interested in the parcel had he known about the auction. He questioned the lack of public awareness surrounding the recent sale.

“I absolutely would considered a possible offer on this property,” Hank added. “I never had the chance.”

Mayor Pro-Tem Erik Altman assumed local Realtors would have known about the sale regardless of the public notice. Meadows and Councilwoman Shanna Draheim said a press release might have helped drive additional interest but also suggested others would have been unlikely to match Kodiak Landarc’s $1 million offer regardless.

“I think the story out there right now is sensationalizing this as though there was some type of malfeasance or wrongdoing,” Draheim added. “I don’t think that’s the case. We’ve had this property for sale — with little to no interest — for a very long time. It’s not like we’ve had people knocking down our doors to put in an offer here.”

Although Bernero’s clients ultimately lost the auction, he said the sale process was “unconventional but fair.”

“There is no complaint-free way to sell valuable property for any municipality,” Bernero added in a statement sent to City Pulse. “East Lansing tried a new approach, taking advantage of the latest technology. Perhaps it will result in quicker turnaround for the redevelopment and flow of tax revenue into city coffers. Time will tell.”

Kodiak Landarc still has about 90 days to complete their “due diligence” before the sale is finalized. While city officials confirmed that plans call for a pot shop, the company will still be required to submit a site plan and a special use permit application — all of which require public hearings and several layers of city-issued approvals.

“Really, this is about $1 million coming into the city,” Meadows added. “The end result is a very good thing for East Lansing — even if it was a mistake not to issue some type of press release. I don’t think we would’ve received any more for this property anyway. I don’t think anything would’ve changed for the city at all in this process.”

Developers are circling in on a swathe of a formerly public property after its quiet auction in East Lansing. And early plans point to a medical marijuana dispensary, a hotel and a famous burger franchise.