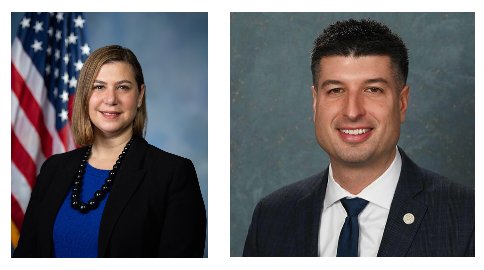 It looks like D.C. Republicans and state Sen. Tom Barrett, R-Charlotte, have found the perfect match in each other.

The House R’s wanted a proven vote-getter in a brand new congressional district that incumbent U.S. Rep. Elissa Slotkin has never run in before.

Barrett was looking for somewhere to run. The independent redistricting commission is one perfunctory vote away from drawing Barrett out of his current state Senate District in 2022, so he’s moving on to a bigger stage.

It’s one he could win.

Unless a judge does something odd, all of that area is being roped into a brand new mid-Michigan congressional district the map makers drew in with Ingham and Livingston counties.

Barrett is the perfect fit here. His 20-some years flying choppers just about everywhere the USA military has fought in the last 10 years will be brought up a time or two.

He knows the district. He’s campaigned the district. He has a young family. He’s against “forced vaccinations.” He had COVID. He only knows it because the military required the test.

I can’t imagine another Republican even thinking about getting into the race against Barrett. Why bother?

Trump isn’t getting involved unless it’s for Barrett.

Meanwhile, the Constitution doesn’t require Slotkin, a Holly resident, to move to the area to run here, but she’s going to do it anyway.

The Oakland County portion of her district is getting stuck with Dan Kildee’s Flint district or something VERY Republican.

It would have Macomb County, the Thumb and other GOP-heavy territory in it.

Slotkin told me last week she feels it’s important that someone who represents a district in Congress live in that district.

In short, Slotkin is looking for property in the area. She’ll be moving her permanent residence away from the family’s Holly farm soon.

So, the table is about set. Slotkin. Barrett.

It’s former CIA versus recently retired Army helicopter pilot in what I’m guessing will be as competitive and likely as expensive a race we’ve seen since Bishop-Slotkin in 2018.

Again, unless the court says this new redistricting panel messed up, we will be voting on a congressional district next year made up of some configuration of Clinton, Eaton, Ingham, Livingston and Shiawassee counties.

A little Ionia or Barry could get mixed in there, but this is basically it.

If you add up the total votes for only the major party congressional candidates in all five counties from 2020, the Democrat gets 51% and the Republican gets 49%.

Add in the likely Republican lean of whatever rural pieces are left and this is shaping up to be as 50/50 as you’re going to get.

I understand Jerry Hilliard — the Dem in Clinton County —isn’t Slotkin. And Tom Barrett probably won’t be left to fend for himself like Paul Junge was in ‘20.

All and all, it’s shaping up to be one hell of a race.

It’ll likely be an expensive one, too. Bishop-Slotkin in 2018 was the state’s most expensive congressional race ever at $28.3 million between both candidates, their PACs and assorted third-party supporters.

Slotkin has been raising U.S. Senate-like numbers for a couple of years now. She’s got around $5 million banked.

Barrett was in a $2.64 million Senate race with the late Kelly Rossman-McKinney in 2018, so he’s shown he can raise money too.

The only reason this race won’t eclipse $28 million is if the parties don’t see the point in dumping money into the Detroit media market to touch what pieces of Livingston County rely on the Detroit networks.

Otherwise, in Lansing, TV and radio should be saturated with heavy advertising.

Suffice to say if this column is your first introduction to a Barrett-Slotkin race, it most certainly won’t be the last.