All about that borscht: The soul food of Ukraine 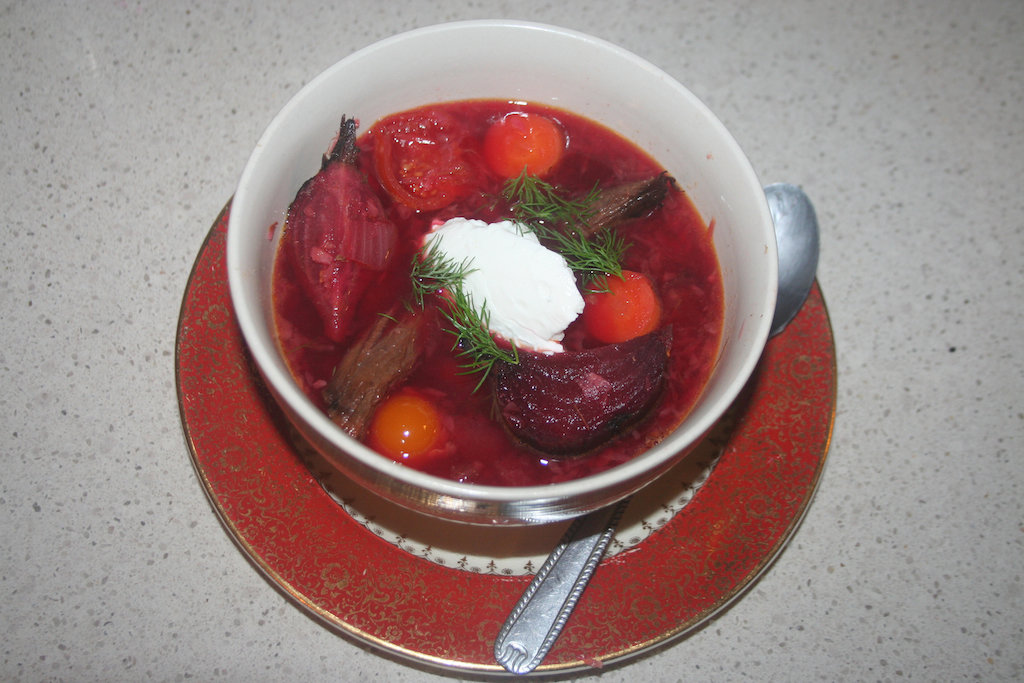 With the invasion happening in real time as I write this, I have no idea how the chips will have fallen by the time you read it. But one thing is clear. President Zelensky, and the nation he leads, are like a hearty bowl of borscht. Vladimir Putin, by contrast, is nothing but a tepid plate of Chicken Kiev.

On my desk is a self-published book of memoirs written by my cousin Paul Zavod, who was born in Ukraine, in 1914. My mother’s parents also came from Ukraine, as did my father’s grandparents.

Ukraine was a rough place for Jews at that time. Paul’s father was arrested for sneaking to the outhouse after curfew one night. They couldn’t even leave their village without special permission. But the scariest moment, according to Paul’s father, came when a pig escaped from a nearby farm and wandered into the neighborhood.

A resident was running a secret, unregistered and highly illegal vodka-making operation, and the smell of the alcoholic grain mash had caught the attention of the pig. The mash was hidden in an underground pit that was covered by some old boards. The massive animal broke through the boards and fell into the pit.

“Now, drunk as a hoot owl, trying to get out, the pig was bellowing at the top of its lungs,” Paul wrote. “If anyone had reported it, all of us would have been in serious trouble. Luckily, we lived in a part of town that was 100% Jewish, and everyone knew what would happen if this became known, so no one even dreamed of reporting it. However, the animal had to be gotten rid of before he woke the rest of the people.”

Since they couldn’t get it out, they killed the pig in the pit and covered it with dirt. Luckily, it didn’t occur to anyone to search the Jewish neighborhood for the missing pig, and the mystery was never solved.

Ukraine has come a long way since then. It’s now led by a Jewish president, which would have been unthinkable, and is a testament to how far this young democracy has come. Yet in other ways little has changed. Here we are, a century after my family left, but the neighborhood is still being bothered by a drunk, lost pig.

Borscht is often celebrated as a Russian dish, but that only holds true if Ukraine is part of Russia, because borscht — and specifically the kind made primarily with beets — comes from Ukraine. If you don’t believe me, ask my mom.

Years ago, seven time zones away from Ukraine, in the dining car of a train in Siberia, I ordered a bowl of borscht. It was purple water with slices of hot dogs in it. They billed us not only for the pathetic bowl of soup, but also for the use of the silverware. When we protested the host explained “mafia” and made a karate chop motion across his femur.

You can’t get much more salt-of-the-land than borscht, and that is the kind of wholesome, earthy image that Putin wants for all of Mother Russia. But he’s acting more like the guy on the train. Zelensky, meanwhile, is walking the talk. He is from Ukraine, and was chosen by the Ukrainians to lead them. He is a deep bowl of borscht with extra-sour cream, with a dill pickle on the side.

By comparing Putin to a tepid plate of Chicken Kiev, I don’t mean any ill will to that lovely, delicious dish. But its history that’s been rewritten countless times to reflect politics. It has a French origin — like Putin’s Napoleonic complex — that began with the Czars developing a taste for French food. These Russian rules imported the necessary talent to instruct Russian chefs. Kiev, situated between Paris and Moscow, benefitted from this traffic.

Kiev’s Continental Hotel became the nexus for the evolution and development of Chicken Kiev, until it was destroyed during the second world war. The Red Army mined the building as they retreated, detonating the explosives when the Germans arrived. The hotel would be rebuilt, and the dish would be renamed by the Bolsheviks so as to strip it of any bourgeois connotation, and was instead called something along the lines of “breaded cutlet with parsley butter.”

Fast forward to the present and here we are the brink of World War III, with a chicken-hawk wandering about Ukraine. Zelensky clearly has a backbone that’s up to the task, strengthened by generations of adversity, and borscht, the chunky soul of Ukraine. The only thing more Ukrainian than borscht is telling the Russians to bounce.

I was at the farmers market last Saturday, shopping for borscht materials. A cool thing about borscht is that you can get all of the ingredients you need at the winter market. Beets, onions, carrots, garlic, celery, and even some meat on the bone — if you are feeling rich.

I make this recipe when I want more of a rich stew than a humble soup. Doing the whole thing in the oven heats the house, a nod to the old village, where the cook stove was the center of the action.

1-plus pounds of meat on the bone (e.g., spare rib or shank)

2 lbs beets, trimmed and cut into quarters or 1/8ths

1 15-oz can of canned tomatoes

Sour cream and mayo for garnish

When the meat is cool enough to work with, cut it off the bone and cube it, and put it back in the baking pan, along with the beets, celery, carrots, potatoes, tomatoes, garlic, lime, vinegar, stock, salt and bay leaves. Braise at 350 with the lid on for an hour, then remove it from the oven to inspect.

Sip the broth, and season with salt and pepper. Add more water if the level has dropped near or below half. Chew the meat and see if it’s soft enough. When the meat is done, remove it from the oven and let it sit for an hour or so before serving. Garnish with herbs, and enough of that white creamy stuff to turn the borscht a bit pink.