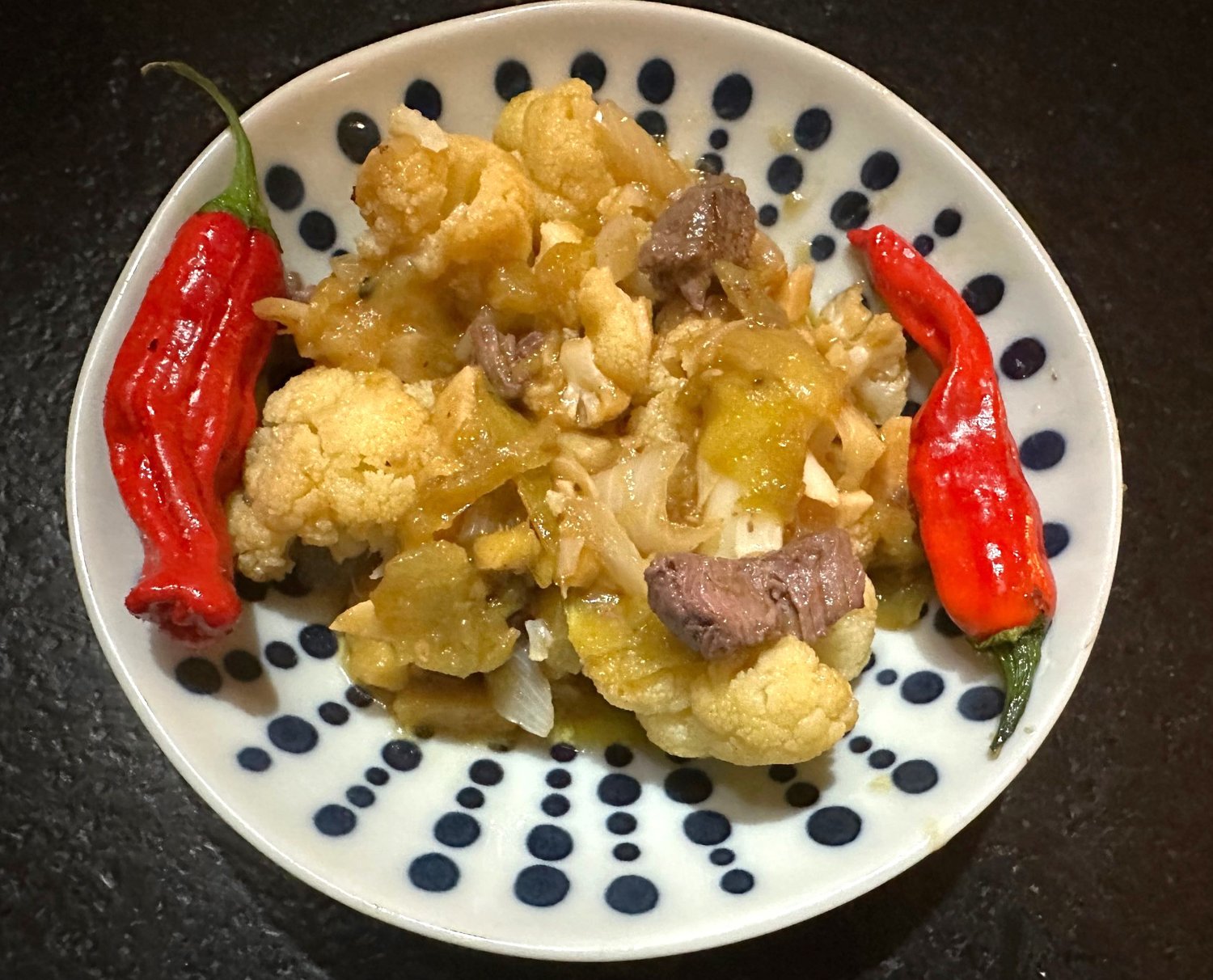 This all-purpose green tomato sauce is great on meat and vegetables and full of savory zing.
Courtesy 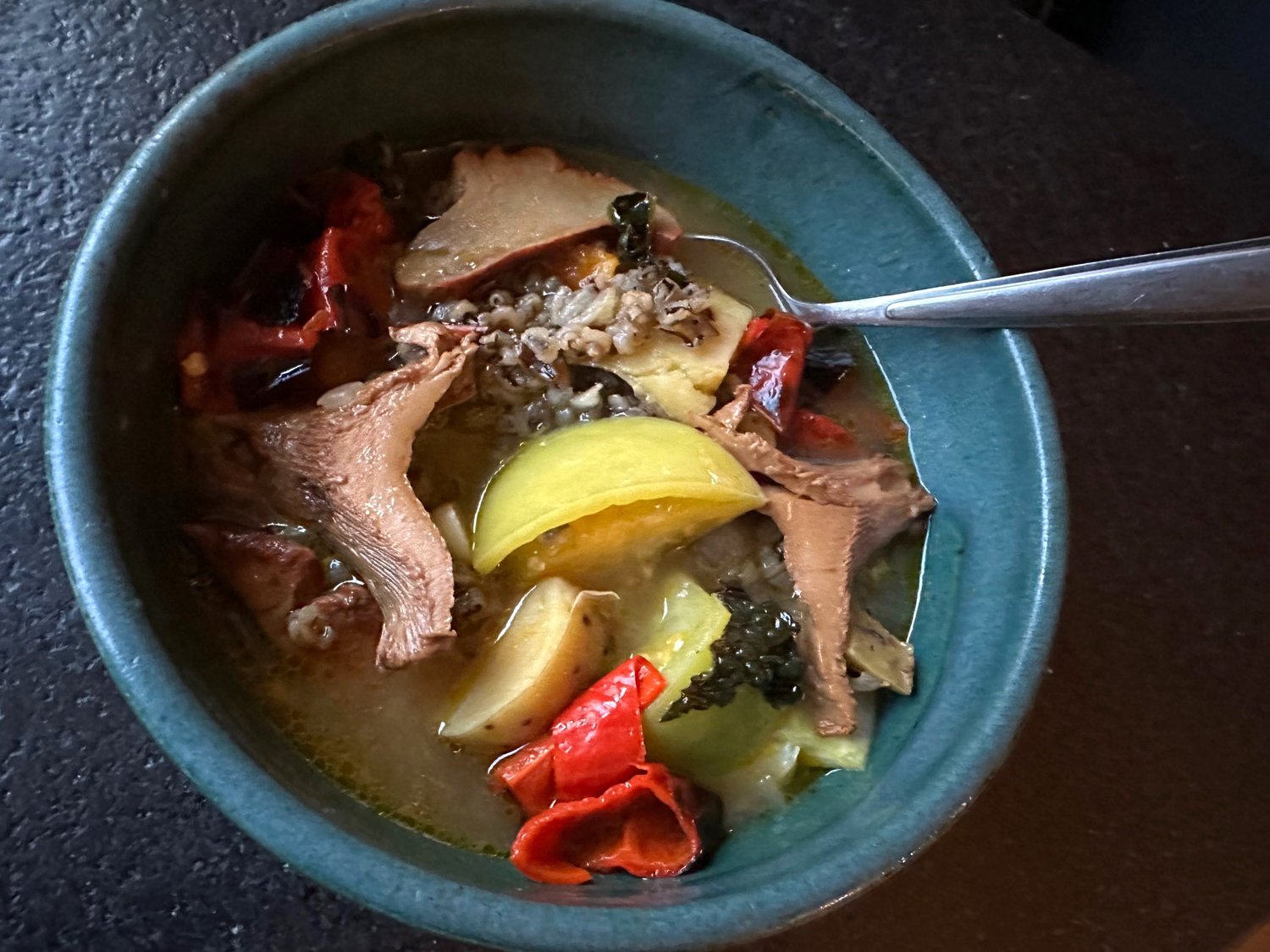 With this green tomato stew, don’t skimp on the oil and butter.
Courtesy
Posted Thursday, November 10, 2022 12:01 am
Ari LeVaux

When you hear “green tomatoes,” does the word “fried” automatically come to mind?

Aside from that southern classic of breaded green tomato slices fried golden, few people know what else to do with hard, unripe tomatoes.
Last week at a blustery farmers market, there were green tomatoes for sale. But nobody — vendors or customers alike — had the foggiest idea what else to do with them, beyond the obvious.
On that almost-last market of the year, I decided to add green tomatoes to a stew of the most colorful nuggets of produce I could find. Waxy golden potatoes, orange-fleshed squash, fully ripened red Anaheim peppers and dark green kale.

I cooked this farm-grown bounty with wild rice, a deer bone and locally foraged chanterelles and lobster mushrooms.
The fungus gave all of its earthy flavors to the broth. And the slices of green tomato from the pile on the counter did what a squeeze of lemon could’ve done — cut through the butter, oil and meat juices and sharpen the flavor.
Most soups or stews could probably benefit from some pieces of in-season, non-fried green tomatoes — so don’t be afraid to chop and throw some in. They won’t bother you and will probably melt away, especially if you chop them small enough. And beyond the soup pot, any dish that could stand a squeeze of lemon could probably use a strategically placed green tomato.

A few days later, I accidentally discovered how to make a green tomato sauce while cooking cauliflower with bacon. As the bacon browned, I added green tomato slices to see what would happen. They vanished into a simmering reduction. I added the cauliflower and cooked it in the sauce until it was soft and irresistible.
I will leave you with my green tomato soup and sauce recipes. Once you give them a try, hopefully, that pile on the counter won’t look so daunting.

This soup must be rich and fatty for the green tomatoes to do their thing, so don’t skimp on the oil and butter. If you don’t have (or want) a meaty bone, use stock in place of water.

1 or 2 soup bones (or replace the water with chicken, beef or veggie stock)

Several leaves of kale (removed from the rib and chopped)

2 teaspoons of salt (if using stock instead of water, add salt to taste)

Add the 12 cups of water or stock to a large pot, along with a soup bone (if using). Heat on medium. Add the wild rice and simmer for an hour. Add the potatoes and simmer for another 30 minutes, until the rice is soft and turns inside out.
While the rice cooks preheat the oven to 375. Clean the squash and cut it into cubes. Toss them in two tablespoons of olive oil on a baking pan, and roast until soft and starting to brown, about 40 minutes. Turn off the oven but leave them in to cool slowly until needed.

At this point, they are like candy and hard not to keep eating. Beware. Enjoy.
While the squash cooks, sauté the onions and mushrooms in the butter and remaining oil. Add the thyme and cook on medium heat, stirring as necessary, until the mushrooms are limp and the onions are translucent.
Add the mushrooms and onions to the soup pot, along with soy sauce, kale, garlic, roasted squash chunks and green tomatoes. Simmer for 10 minutes and adjust the seasonings with salt and pepper.  Garnish with roasted sweet or spicy peppers.

This all-purpose sauce is great on meat and vegetables and full of savory zing. You will need a heavy-bottomed pan with a tight-fitting lid.

1 green tomato, cored and sliced into about 12 wedges

12-ounces cauliflower florets or another vegetable, or pieces of meat

Fry the green tomatoes in the oil on medium heat. After five minutes, add the ginger and garlic. Cook another five minutes, stirring often.  Before anything burns, add the cauliflower and the water and put the lid on. Steam should build up under the lid, and melt those green tomatoes into a sauce that coats the cauliflower, meat or whatever is cooking. Season with salt and pepper and serve.

Experience the tasty alchemy at Altu’s