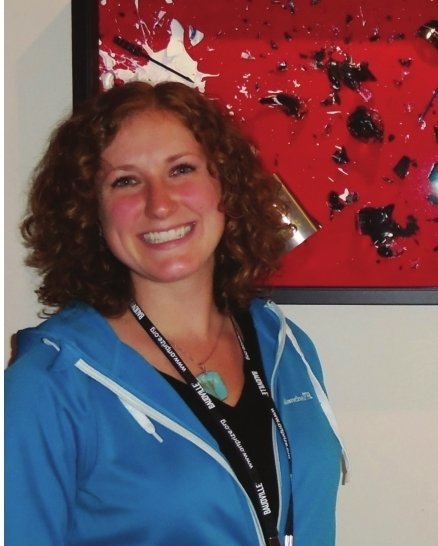 CORRECTION: Due to an editing error, an earlier version of this story misidentified Dr. Ryan's gender.

As a neuroscience researcher, Apryl Pooley has dedicated her life to the rigors of scientific exploration. But it wasn’t until she turned that knowledge inward that she was able to overcome her personal demons.

Pooley’s dramatic story of turning personal trauma into a fulfilling life is told in her debut memoir, “Shadow Brain:

A Neuroscientist’s Journey Through PTSD and Woman hood . ” Pooley, 28, has certainly experienced the darker side of life, starting with an acquaintance rape in high school followed by another rape while she was a student at Eastern Illinois University.

Following the first incident, Pooley was blamed for being complicit in the assault and was abandoned by her high school friends. She sought solace in alcohol and drugs, a pattern she would return to over and over again for the next eight years — including a portion of her time at Michigan State University, where she is pursuing a Ph.D. in neuroscience.

This is where some good fortune came in. Pooley discovered that her MSU health care policy included an annual physical, and she trudged off to Olin Health Center for an appointment with a physician.

The doctor quickly recognized that Pooley was an addict in the throes of withdrawal. It was then, for the first time, that Pooley told the stories of her rapes and fully realized the scope of her posttraumatic stress.

“Doctor Ryan didn’t question me and walked me right upstairs to meet with a counselor,” she said. “(She) told me I had fortitude.”

This led Pooley into researching posttraumatic stress disorder and its particular effect on women. PTSD created darkness within her personal life and, as a scientist, Pooley thought neuroscience could help her find her way to the other side.

Pooley found in her research that women and men are affected differently by post-traumatic stress, but along the way she also discovered a much more human element which would be key in overcoming the shame and guilt she felt from her trauma.

As part of her therapy, Pooley began writing down her story. She soon realized that what she had was a book, and she set about the arduous process of getting it published. Several high-profile campus rape stories, along with MSU’s choice of the controversial George Will as a graduation speaker, spurred Pooley to publish her story of resilience earlier than she expected.

“I thought if I could keep one person from taking their own life, then everything I had been through would’ve been worth it,” she said. “I know for a fact that my story has already done that.” Writing the book in almost real time, Pooley saved the last chapter for her self-discovery about sexuality.

“Although I had tried to have relationships with men it hadn’t worked out,” she said. “I discovered I had been shopping in the wrong aisle. I finally accepted my sexuality and orientation. I finally had hope.”

When Pooley read the news on March 22 about several counties in Michigan, including Ingham County, opening the window for same-sex marriage, she went into the bedroom and awoke her partner saying, “Let’s get married.” And they did.

It’s easy to compare Cooley’s book to some of the great addiction-themed memoirs like “Smashed,” “The Basketball Diaries” or “Drinking: A Love Story,” but “Shadow Brain” stands alone for its forthrightness and the author’s scientific bent.

When Pooley walks out on the big stage at Wharton Center today at the TEDxMSU presentation, she will use the full 18 minutes to tell her story of trauma, survival, science and humanity. Her story deserves everyone’s full attention, and it definitely deserved a book.

Pooley also will discuss and sign copies of her book from 7 to 9 p.m. March 26 at EVERYbody Reads in Lansing. All proceeds will go to the MSU Sexual Assault Program