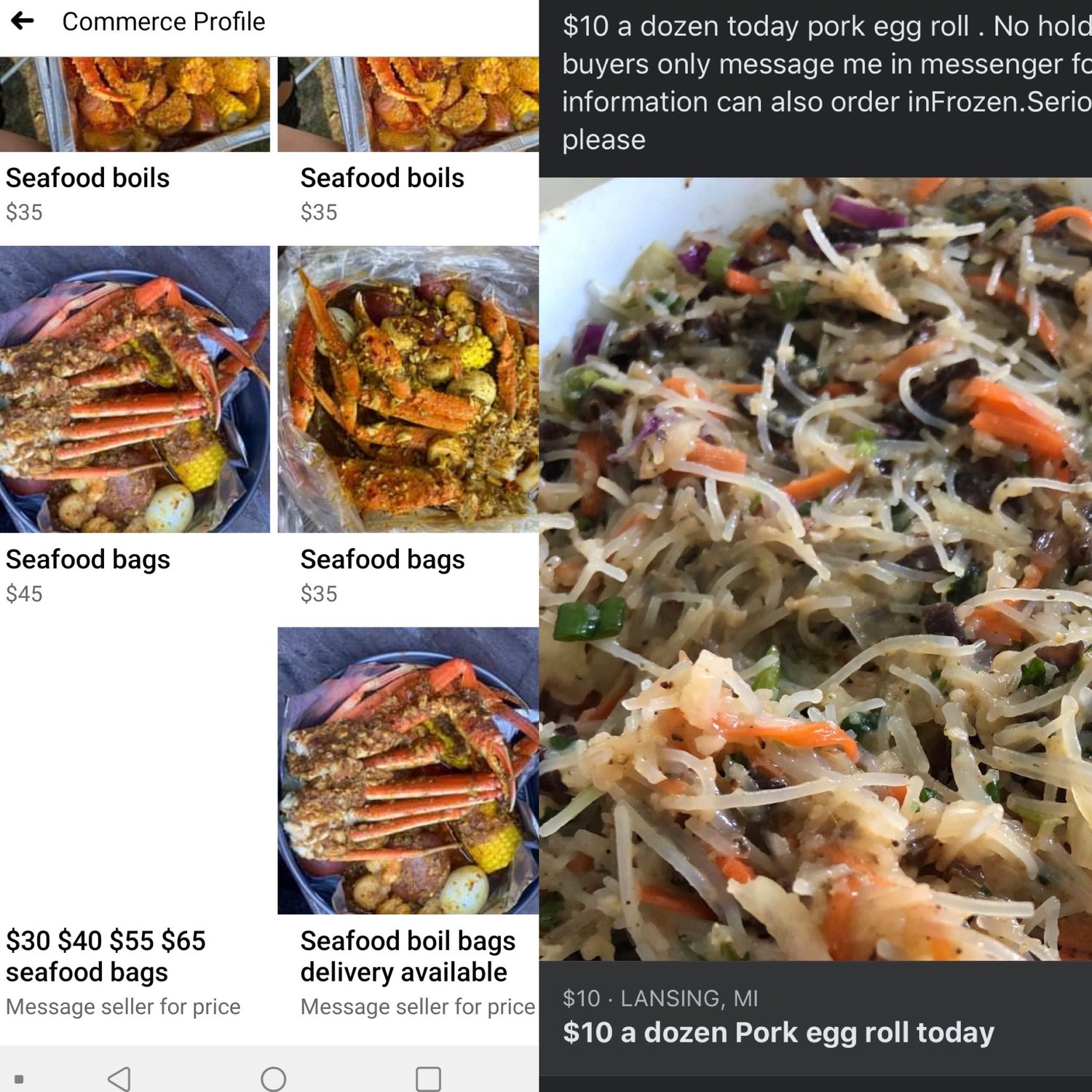 But Ingham County Health Officer Linda Vail said buyers need to be aware that unless the food is made in a licensed food kitchen, it’s illegal — and can be potentially dangerous to your health.

"Any time you are selling or giving food to the public," Vail said, "there has to be a way to ensure it hasn’t been adulterated or that there is no disease there.”

Vail said foodborne illnesses like Hepatitis A, E. Coli and Norovirus can cause serious health issues, including death. A specific strain of E. Coli creates a toxin that breaks down the body’s small blood vessels and destroys the kidneys. Hepatitis A can cause liver damage, while Norovirus can cause intestinal distress that can lead to vomiting, diarrhea and dehydration.

Some were located in Wisconsin. Others were located in Lansing. One post turned out to be a licensed restaurant selling tamales online. One vendor blocked this reporter. Another offered apple turnovers for sale in East Lansing but wasn't interested in commenting for this story. Others did not respond at all, and their posts soon disappeared after the message was read.

Vail said her office has  reached out to people offering food for sale through Facebook and often ended up in the same situation as this reporter: The seller blocks the search scroll Facebook for violations. “It’s not like we were doing that before, but certainly not now,” she said.

This reporter also identified several offers which appeared to violate Michigan’s marijuana laws.  Offering cannabis-infused edibles without a license is a felony.

Eric Hill, who appears to live in Holt, posted several offers for food containing cannabis extracts on Facebook, including one offering medibles as “party favors.” Hill said that his most recent post — what appears to be a chocolate in a muffin wrapper -— was available for a “donation.”

“It was for a certain friend that needed help so I help him with an add to see if I could generate money for him and his family sense unemployment isn’t doing there job,” Hill said in a digital message.

He denied that his products were marijuana related, instead insisting that the advertised $15 donation was actually for the recipe for his friend’s grandmother’s German chocolate buckeyes.

This reporter also identified offerings for marijuana-infused food products from Provo, Utah as well as another offering marijuana edibles in the city of Lansing. Both profiles have since deleted their posts after reviewing the request for comment and then blocking this reporter.

Hill’s post — like other online food sales — also appeared in the “Lansing Yard Sale” group, a private Facebook group of 23,600 people. Megan Merritt is an administrator of the group. She’s willing to police the forum, but said it can be difficult to monitor hundreds of new posts each day.

“I’m not watching every post in the group as there’s 23k members and hundreds of posts a day,” Merritt explained. “My group doesn’t promote any illegal items. If you see them, report them.”

A spokesman for the state Department of Licensing and Regulatory Affairs — which oversees marijuana licensing in Michigan — said even under legalization, it is illegal for someone to sell or exchange marijuana for something of value. When LARA is made aware of criminal violations, those are forwarded to and handled by local and state law enforcement agencies.

But Ingham County Prosecutor Carol Siemon said  Sunday  her office has not had any referrals tied to marijuana-infused product sales from local law enforcement since legalization. If they did, they don’t  have a plan for how to roll out potential criminal charges.

“We have not received any community member or police complaints about this activity, and haven’t formulated a response for it if we do,” Siemon said.