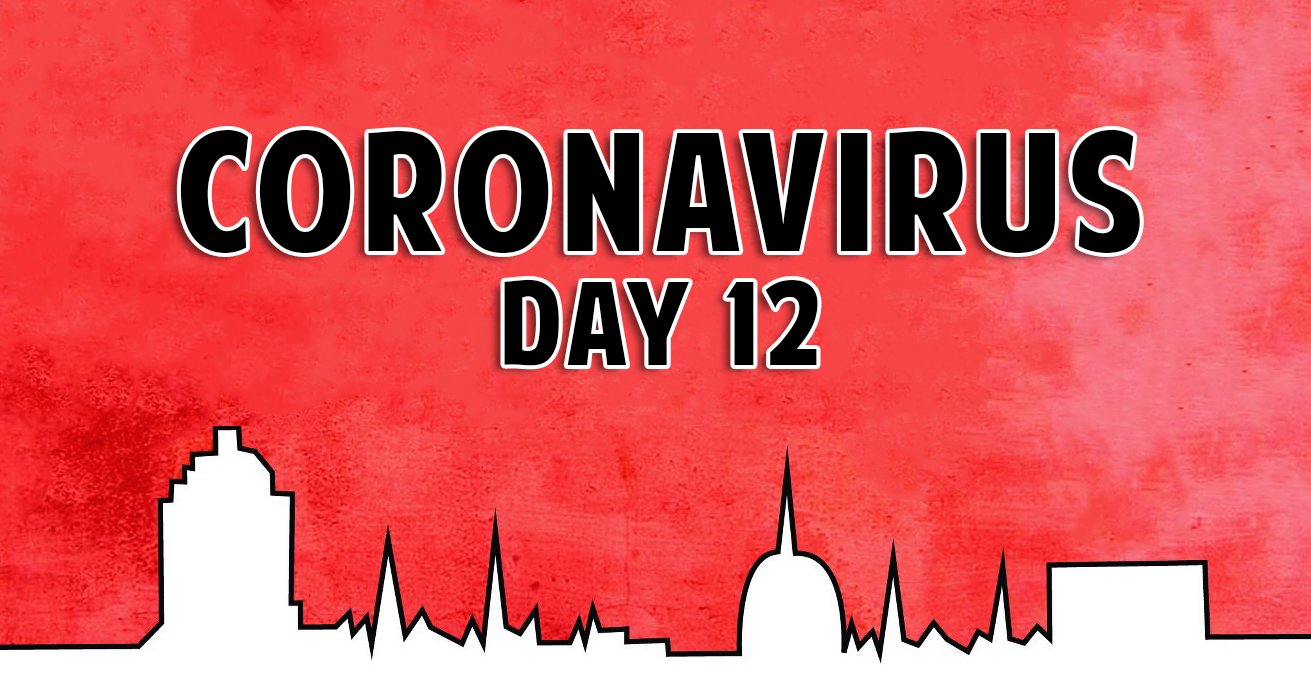 MONDAY, March 23 — Much of Michigan is at a standstill that will continue 'til at least mid-April after Gov. Gretchen Whitmer, in a sweeping executive mandate issued this morning, ordered all business operations that are “not necessary to sustain or protect life” to close, also directing residents to stay at home except in very limited circumstances.

State figures released this afternoon showed at least 15 people are dead from coronavirus in Michigan as the number of confirmed cases of COVID-19 rises to 1,328 statewide, including 17 in Ingham, Clinton and Eaton counties. The latest death was an elderly adult man in Washtenaw County, reports the Detroit Free Press.

The U.S. Centers for Disease Control and Prevention listed a total of 15,219 cases of COVID-19 and 201 deaths earlier this afternoon. The New York Times database, as of Monday afternoon, listed at least 39,819 confirmed cases and at least 455 deaths nationwide. Reports are generated as frequently as possible based on new tests.

And without more aggressive transmission control in Michigan, Whitmer said the situation could become dire, citing projections today that indicated up to 70% of the population — nearly 7 million Michiganders — could contract the disease over the coming weeks, much like the trajectory witnessed in Italy as the pandemic unfolds.

“Of that projected, about a million would need to be hospitalized,” Whitmer added.

And with only about 25,000 acute care beds currently available in hospitals across the state of Michigan, the lockdown order — much like others implemented in states like Ohio, Illinois, New Jersey, California and New York — should help “buy some time” for the state’s health care workers as they face a possible overload, she said.

“This disease can’t spread from person to person if we’re not out there,” Whitmer announced at a press conference today.  “Right now, too many people are still out and about unnecessarily, so we must do more.”

Whitmer’s “Stay Home, Stay Safe” executive order demands all residents stay in their homes for the next three weeks unless they’re doing an outdoor activity, are part of a “critical infrastructure workforce,” or performing tasks necessary to the health and safety of themselves or their family — like a trip to the hospital or picking up supplies at a grocery store. Under state law, those who violate the order could face a misdemeanor charge.

When residents leave their homes, they’re also required under the executive order to adhere to social distancing measures recommended by the CDC, including remaining at least six feet from people outside their immediate household “to the extent feasible under the circumstances,” according to a statement from Whitmer’s office.

While the recent restrictions still allow for carryout and delivery from Michigan restaurants, Whitmer said her ongoing shutdown mandate on schools and restaurant dining rooms will also continue until at least April 13.

The order also does not prohibit outdoor exercise and still allows businesses to operate remotely, as long as they all avoid in-person operations, though the Detroit Free Press reports residents can expect to see closures at professional firms, such as lawyers offices, real estate companies, accounting organizations and other services.

Other places — like gyms, spas, theaters, hair and nail salons, tattoo shops and other retailers — have already been shuttered under another executive order last week. Some had already proactively closed their doors.

Whitmer encourages non-essential businesses not to skirt the rules over the next few weeks or face consequences.

“This is not a recommendation. This is an order,” Whitmer said. “For any businesses that don’t heed this order, anticipate there will be fines and they will be shut down. We have a moment to stem the crisis that’s unfolding.”

Health care institutions and elected leaders, meanwhile, are turning to the public to fight the virus in Michigan.

U.S. Rep. Elissa Slotkin, D-Holly, called on residents yesterday to “step up” by donating unused gloves, masks, gowns and other protective equipment and supplies to hospitals, according to a recent press release.

“We’ve been getting hundreds and hundreds of calls from our health care workers, from our first responders, about the shortages of personal protective equipment,” Slotkin said in a video posted to social media yesterday.

Slotkin, in a statement, said supply shortages will take time to overcome and noted that some first responders and frontline health care employees within her district — which includes Sparrow and McLaren hospitals in Greater Lansing —  are “deeply concerned” about their ability to safely care for patients without equipment.

In a statement yesterday morning, Sparrow solicited donations in order to purchase additional protective equipment — like ventilators and testing supplies — as its costs rise “above and beyond” their “normal spend.”

Those looking to donate cash to the Sparrow Foundation’s response fund can do so online. Medical goods and equipment can be donated at a new drop-off site at the old Eastern High School, weekdays 10 a.m. to 4 p.m.

The city of Lansing has also opened drop-off locations for homemade masks, unopened packages of gloves, cleaning supplies, N95 respirators and other protective gear to help alleviate an ongoing equipment shortage for first responders, health care workers, homeless shelters and others that work with vulnerable populations.

Those items can be dropped off anytime at either the Fire Department Station #8 at 815 Marshall St., the Lansing Police Department’s downtown headquarters or its local operations center at 5815 S. Wise Road.

A 52-year-old man died from COVID-19 Saturday at Henry Ford Macomb Hospital, following other deaths over the weekend of another man in his 70s at Spectrum Health in Grand Rapids and two southeast Michigan women in their 90s, one who died at Henry Ford’s hospital in Bloomfield, reports Crain’s Detroit Business.

Michigan also reported yesterday a total of 108,710 unemployment claims filed last week, compared to an average of 5,000 claims — an approximate increase of 2,100%, according to state officials. Unemployment Insurance Agency benefits are funded by a $4.6 billion trust fund operated by the state.

Paul, a medical doctor, did not quarantine himself while awaiting results. He swam in the Senate pool yesterday morning before he learned the outcome. The Senate gym remained open, even though gyms across the country have been ordered closed. As a result of his diagnosis, two other senators have since quarantined themselves.

Beginning today, all regular CATA bus routes are suspended. And Michigan Secretary of State branch offices will return to regularly scheduled branch hours from 9 a.m. to 5 p.m. on Monday, Tuesday, Thursday and Friday and 11 a.m. to 7 p.m. on Wednesday. In-person transactions are for critical services by appointment.

City Pulse needs your support now more than ever. Advertising — almost all our revenue —  has fallen sharply because of closures due to the coronavirus. Our staff is working seven days a week to help keep you informed. Please do what you can at this time to contribute to the City Pulse Fund. All donations are tax-deductible.