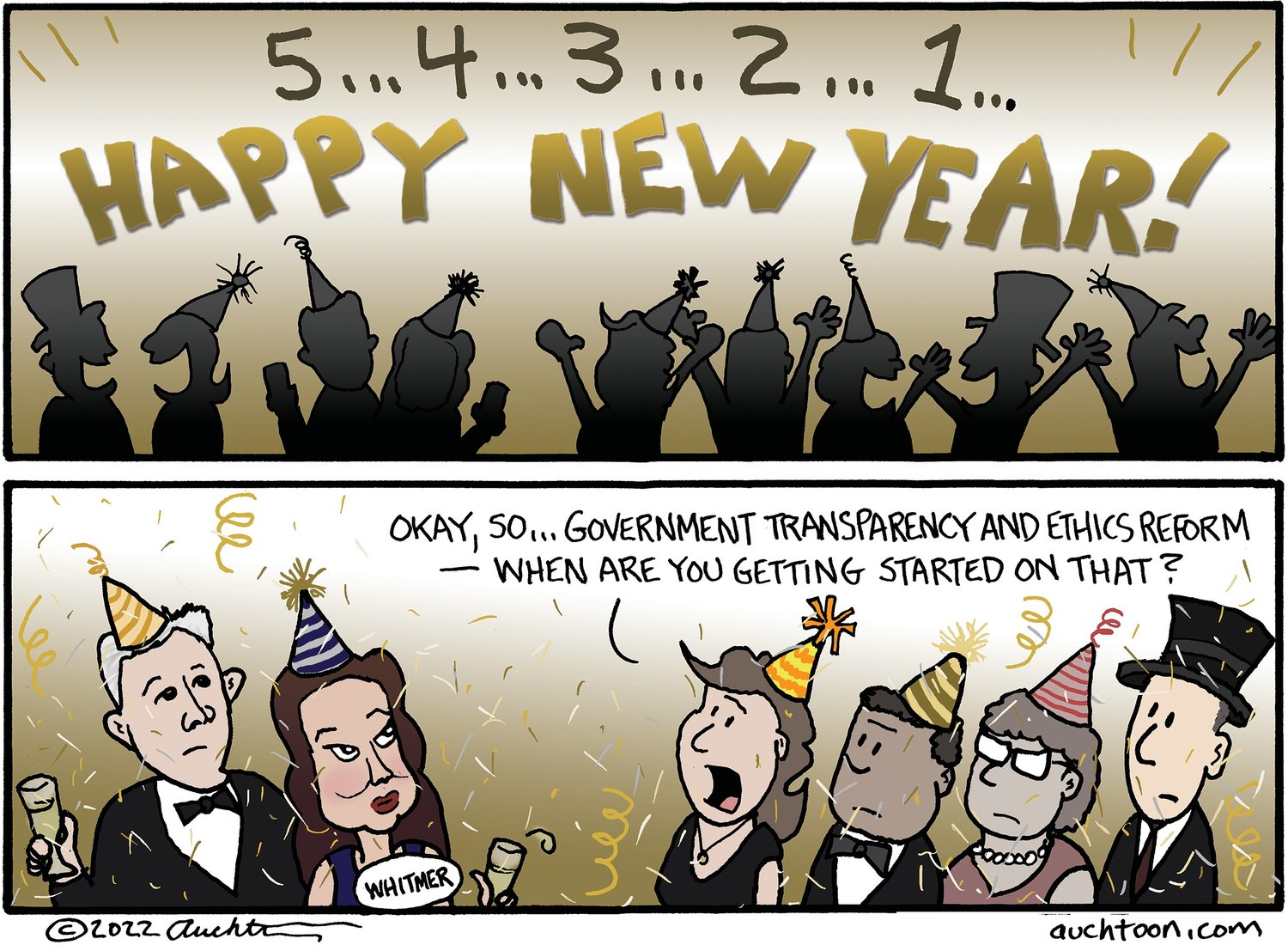 The start of a new year almost always brings a renewed sense of hope and optimism for a brighter future. Coming off some of the most tumultuous times in U.S. history — the COVID pandemic and the Trump-led Capitol insurrection in particular — it won’t take much to make 2023 a better year than we’ve experienced in the recent past. We’ve also learned through the trials of bitter disappointment that it’s best to keep our expectations in check. With these caveats, we offer a few of our hopes for 2023:

Dems in the driver’s seat

Michigan Democrats will control the Legislature and the Governor’s Office for the first time in 40 years, but their razor-thin majorities in both the House and Senate will make it difficult to do anything hard or controversial. Much like the U.S. Senate, where West Virginia’s Joe Manchin and Arizona’s Kyrsten Sinema regularly threw a monkey wrench into President Biden’s agenda, Michigan Democrats are likely to face issues where they can’t count on the vote of members who represent swing districts. Democratic leaders will have to walk a fine line as they look toward the 2024 elections, balancing their desire to get things done (read: reversing the damage caused by 40 years of Republican rule as quickly as possible) against the need to protect vulnerable caucus members who hold their seats by a slim margin.

Some may be tempted to flex their newfound legislative muscle to quickly advance a progressive agenda, but we think it’s wiser to exercise some restraint and focus on strengthening their majority in the next cycle by demonstrating that Democrats can govern from the center and get things done. As cogently stated by City Pulse political columnist Kyle Melinn, “If they make this term about paybacks and kowtowing to the hopes and dreams of a passionate progressive base, their time in the majority will be short.”

Throughout her first term, Gov. Gretchen Whitmer repeated her “fix the damn roads” mantra more times than we can count. We didn’t realize she mostly meant “fix the damn state roads.” Michigan’s most abused roads are in and around densely populated urban areas. Among the worst are found in the maze of neighborhood streets that don’t qualify for federal road funding. We urge state leaders to seize the day and toss out the Rube Goldberg legal contraption known as Act 51 (the state’s convoluted distribution formula for road dollars). Replace it with a new formula that makes a major investment in fixing local streets in Michigan’s largest cities. A couple billion off the top of the state’s ARP-driven budget surplus should fund the effort.

The Michigan Supreme Court ruled in July that the Elliott-Larsen Civil Rights Act already protects the state’s LGBTQ community through existing language that prohibits discrimination based on sex in employment, housing, education and access to public accommodations. The high court’s landmark decision was a welcome step forward, but the job isn’t done until the act itself is amended to fully and explicitly prohibit discrimination on the basis of sexual orientation, gender identity or expression. The vast majority of Michiganders will support the move.

Stemming the tide of gun violence means enacting reasonable restrictions on gun ownership. A heated war of words is inevitable but that’s preferable to continued war on the streets, where deranged individuals with easy access to high-powered weaponry continue to slaughter innocent people, often targeting them for their race, religion or sexual orientation. It’s time to enact what Whitmer referenced this week in her second inaugural address as “common sense” gun reforms. These should include more robust background checks, banning large-capacity magazines, safe storage requirements, and a “red flag” law that allows a court to order the temporary removal of firearms from a person who may present a danger to themselves or others.

Long-stalled reforms in Michigan’s sunshine law also should top the legislative to-do list. That the governor and state lawmakers are exempt from the Freedom of Information Act, which guarantees public access to most government records, is indefensible. A legislative fix unanimously passed the state House in 2021 before hitting a stone wall in the Senate. With full Democratic control, the legislature should get FOIA amendments on the governor’s desk in the first 90 days of the new year.

Bipartisan agreement appears to be within reach on expanding Michigan’s Earned Income Tax Credit, a move that will deliver direct financial relief to thousands of working families across the state. Rolling back state taxes on pension income, long promised by Whitmer, also should be on the table. And, we’re intrigued by State Rep. Julie Brixie’s call for a graduated income tax in Michigan. It would be a bold step toward a more fair and equitable tax structure but probably a hard sell for vulnerable Democratic lawmakers, who will be loath to vote for anything resembling a tax hike.

Invest in our future

Finally, improving Michigan’s long-term economic prospects must be front and center. We’re encouraged by the wave of new investments across the state in next-generation electric vehicles, battery storage technologies and recreating domestic supply chains for semiconductors and solar panels. But new jobs alone won’t be sufficient to position our state for future success and prosperity. Substantial and sustained investments in higher education and vocational training must be accompanied by a renewed focus on attainable workforce housing and an all-out effort to attract and retain the talent that will be needed to power Michigan’s next economy.

If only half of these measures get done in 2023, we’ll consider it a rousing success. Stay tuned.