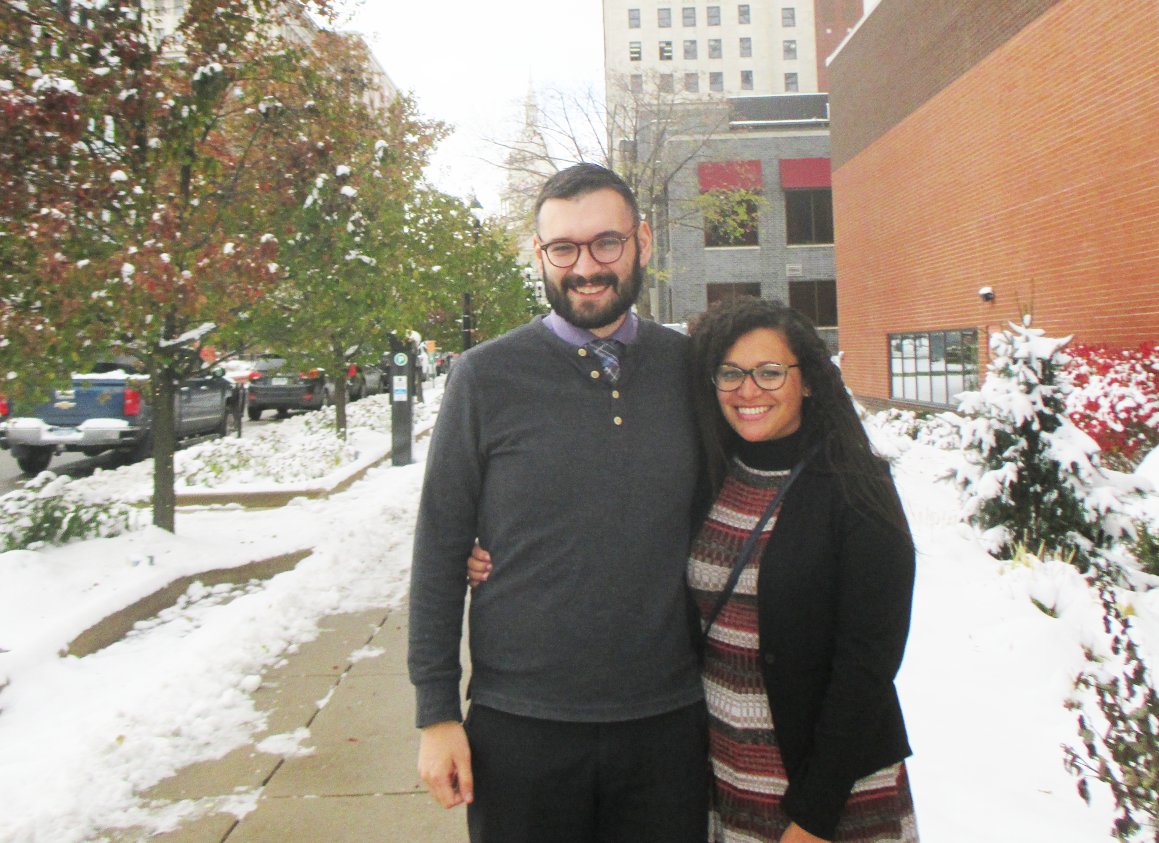 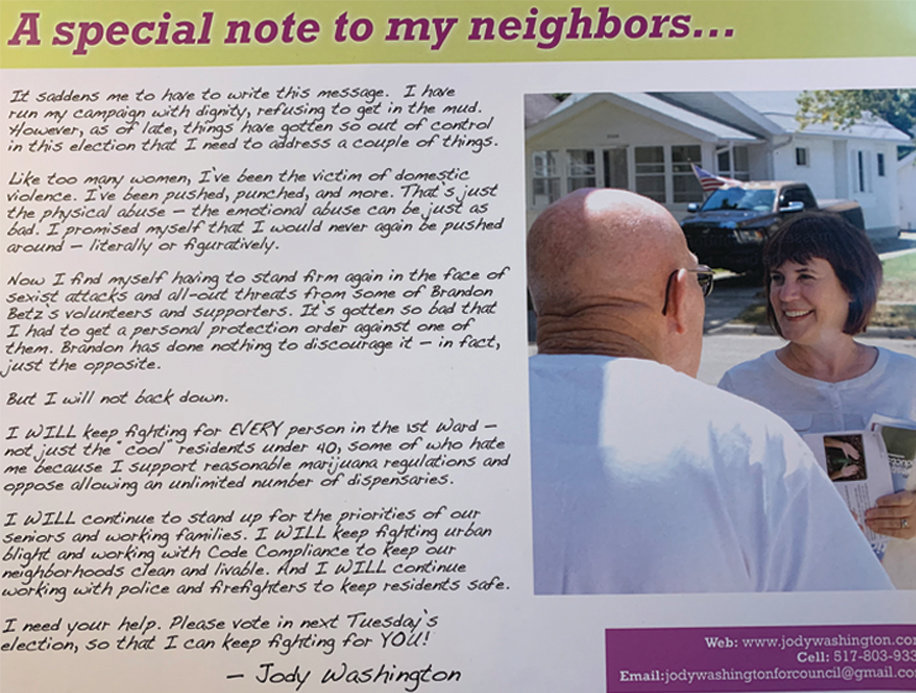 A mailer from Jody Washington's campaign that was sent to First Ward residents.
Courtesy
Previous Next
Posted Thursday, November 14, 2019 9:13 am
Chris Gray

A sarcastic line in a mailer from Lansing Councilwoman Jody Washington gave life to a strong undercurrent in the race for the First Ward Council seat, which Washington lost last week.

“I will keep fighting for every person in the 1st Ward — not just the 'cool' residents under 40.”

The snide attitude toward a large and growing portion of northeast Lansing — young adults — brought to mind Hillary Clinton’s errant remark that seemed to cast blue-collar white Midwesterners as a “basket of deplorables”: an insult to a key demographic that each needed to win to get elected.

“I’m a cool kid under 40,” said Kelly Collison, 31, a former state representative candidate who said she knocked on hundreds of doors for Betz. “She seems to despise anyone who is young.”

Washington was sent packing by a 55-45 margin by her upstart challenger, Brandon Betz, a 28-year-old economist with the Michigan League for Public Policy. Turnout, especially on election day, exceeded expectations, although still coming in at 16 to 17%. Washington did not respond to requests for comment after the election.

Betz was propelled to victory by younger adults, especially the local Democratic Socialists of America chapter, a group inspired by openly socialist presidential candidate Bernie Sanders and galvanized by the dystopian reign of Donald J. Trump.

Collison, a DSA member, said her distaste for Washington went back a few years. She first got involved in local politics when a road was built through Ormond Park to improve access to Groesbeck Golf Course. Her 9-year-old daughter was blocked from testifying at a public hearing against the new road.

Councilwoman Carol Wood, who won reelection last week, called the next day to apologize for how that was handled, but she never heard anything from her own ward representative.

“We’re ready for a candidate who steps up and listens to our issues and doesn’t ignore us completely,” said Mara Zumberg, 26, the chairwoman of the local Democratic Socialists of America. “We did a lot of knocking” — 3,400 doors, by her count.

It was the fourth election in a row in which an incumbent was shown the door after multiple terms in office, following Brian Jeffries, A’Lynne Boles and Tina Houghton.

An exception, of course, is Wood, who rolled to a sixth term in the at-large race with the support of 57 percent of voters, along with Patricia Spitzley, who was approved for a second term with 51 percent of voters.

This new crop of socialists doesn’t talk much about “seizing the means of production.” They’re geared toward much less ideological issues: They want better public services, with new development paying its fair share. And they want to lift restrictions on the marijuana marketplace that Washington helped put into place.

“We’ve got how many bars on Michigan Avenue? We’ve got a strip club right next to the Capitol,” said Collison, who argued the backlash to Lansing’s early proliferation of unlicensed medical marijuana dispensaries has been ridiculous. Like Zumberg, Collison wears her Democratic Socialists of America badge on her sleeve. “DSA was the structure that made sure Brandon got elected.”

Zumberg said Betz was also a great organizing vehicle for DSA, with new members joining throughout the campaign.

Betz himself has been hesitant to embrace the label, and he accused Washington of “red-baiting” when she called him a socialist during the campaign.

“They supported my campaign because I believe in the grassroots power of the working class and in people over corporate profits. I intentionally didn’t label myself a Democrat, progressive, or democratic socialist during this campaign.”

“I think it was a people-centered message,” Betz said. “It’s us against this powerful business lobby and the developers.”

Along with strong union support, Washington funded her campaign with checks from developers Joel Ferguson and Pat Gillespie, who were able to donate large sums of money to the Council members who stand to approve their plans because of Lansing’s weak campaign finance policy.

Councilman Peter Spadafore attended Betz’s election night party at the Green Door Bar & Grill, and Betz said he hoped to align with him and Council colleagues Kathie Dunbar and Brian Jackson to set a more progressive agenda for Lansing. He also hoped to find areas of agreement, such as job creation and support for organized labor with other Council members, such as Jeremy Garza or even Washington’s son, Adam Hussein.

Spadafore, along with Mayor Andy Schor, were circumspect and anodyne in their on-the-record comments the days following the election.

“Nothing surprises me anymore in politics,” Spadafore said. “I don’t think he’ll be making any snap decisions,” speaking approvingly of Betz’s background in economics and public policy.

Betz may have a hard time shifting the city’s approach to economic development, which is built on sacrificing future tax revenues for new construction. Spadafore said he was the only recent Council member to oppose these tax breaks, which he did with the Red Cedar golf course redevelopment. And even Spadafore said the city already negotiates its way to reach its agreements, especially on brownfield developments.

The Councilman-elect also moderated his fiery populist campaign rhetoric about developers. “I don’t want developers to be afraid to approach us, but I’ll put on my policy analyst hat and look hard at these proposals.”

Schor said he was ready to work with Betz as he was with Washington.

“Any time you add a new voice to a group that small, it changes the dynamic,” Schor said. “I can work with anybody if they’re willing to work with me.”

Schor did think the City Council would reopen marijuana regulations next year. Delays in the state rollout have meant that recreational pot will not be on sale until well into spring, leaving more time to work out disagreements in the number of provisioning centers and other businesses allowed in the new market.

The mayor said he hopes to offer one-day licenses for marijuana-themed events and support local entrepreneurs by lifting the caps on so-called microbusinesses, a special license type for businesses with low volumes. A compromise between Schor and this year’s Council limited the number of these businesses to just four, with no social equity components or provisions for local people.

“I was willing to let a lot of that go in order to get the regulations in place,” Schor said.

Betz thinks he could go much further. He thinks Lansing’s market could support double the number of provisioning centers it is set to approve, and doing so would increase tax revenue to the city, as well as provide a lot of new jobs for people making $15 to $20 an hour, all of whom further pay taxes to the city. “I think we need to consider marijuana grows as an economic revenue generator,” Betz said.