The CP Edit: Drawing the line on gerrymandering 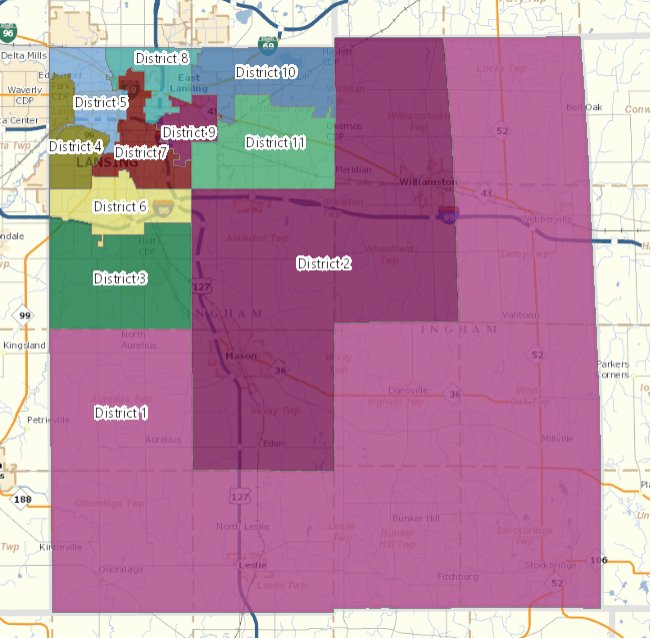 Once every 10 years, following the decennial census, the boundaries that define legislative districts for the Michigan Legislature and Congress are redrawn to reflect changes in population, with the goal of ensuring that each district more or less contains the same number of people. One might expect this process to be a simple exercise in mathematics and map drawing. In reality, it’s anything but simple and more often than not, rife with political maneuvering that seeks to gain an electoral advantage for one political party or the other.

The usual tactic for creating a partisan advantage through redistricting is known as gerrymandering. Whereas legislative district boundaries are generally supposed to follow existing jurisdictional lines — the borders of a county or city, for example — gerrymandering seeks to create districts that intentionally contain a majority of Republican or Democratic voters. The result has been some truly bizarre districts that snake across multiple communities in an effort to capture pockets of party supporters and assemble them into a single voting district.

Putting an end to partisan gerrymandering was the principal driver behind a successful grassroots campaign in 2018 to change Michigan’s redistricting process through a statewide ballot proposal. As a result, this year’s process is being led by a nonpartisan commission made up of ordinary citizens instead of politicians with a vested interest in tilting the district maps toward their party. The commission has labored for months to gather public input on how the new maps should be drawn. Their analysis has centered on terms like “communities of interest” that seek to keep like groups of people together in a single district so they have a stronger chance of electing one of their own to represent them in Lansing or Washington.

The commission has had a somewhat bumpy ride thus far, having missed the constitutional deadline for creating new district maps, then catching flak for hiring a law firm with a track record of helping Republicans gerrymander legislative districts. Some observers think the process has been a disaster, while others are taking a wait-and-see posture before judging the success or failure of the effort.

Here in Greater Lansing, it appears that the process will result in significant changes in our legislative district boundaries. Where Lansing and East Lansing have been in the same state Senate district for as long as we can remember, going forward they most likely will be split apart, with Lansing in one district and East Lansing in another.

What does this mean in practical terms? For starters, it means that the region’s current state senator, Curtis Hertel, who is term-limited and will serve his final year in office next year, is likely to be replaced not by one new senator, but by two. A highly anticipated campaign showdown between current and former state representatives Sarah Anthony and Sam Singh likely won’t happen after all. Instead, each will be able to run in a new Senate district and both will have a better-than-average chance to win. For fans of both politicos, it’s a relief that voters won’t have to choose between them in the next election.

At one level, this is a positive outcome for the region — effectively doubling Greater Lansing’s voice in the Michigan Senate and ensuring that both seats will be held by Democrats. It may also increase the likelihood that the Legislature’s upper chamber will flip from Republican to Democratic control after the 2022 election. It’s been a long time coming: Republicans have held the Senate majority for the past 40 years, at least in part due to aggressive partisan gerrymandering.

At another level, separating Lansing and East Lansing is mildly disconcerting, in the sense that it creates a new division between the East Lansing/Meridian Township political axis, dominated by more affluent white people, and the urban core of Lansing with its significant communities of color and much higher proportion of people living in poverty. On the one hand, this could be viewed as keeping communities of interest together in each district. On the other, we hope it’s not a harbinger of conflict, where the disparate interests of the two cities create a new political wedge that thwarts rather than encourages regional cooperation that benefits the Greater Lansing region as a whole.

Another effect of the redistricting process is that it can kick off a round of legislative musical chairs, where incumbent elected officials are booted from their long-held districts and thrown into new ones, sometimes pitting them against political allies for the right to represent a newly constituted legislative district. Even Elissa Slotkin, Lansing’s congressional representative, may be forced to buy a new home in her redesigned congressional district to remain eligible to represent the Lansing area.

It remains to be seen if the end result of the citizen-driven redistricting process will be an improvement over the partisan-led efforts of the past. From our standpoint, if the new boundary maps create more Democratic-leaning districts that help break the Republicans’ interminable stranglehold over the Michigan Senate, we’ll consider it an unqualified success. Some might say we’re arguing for another form of gerrymandering that benefits Democrats over Republicans. We call it correcting the injustices of past gerrymandering that unfairly tilted the electoral playing field and gave Republicans an undeserved advantage.