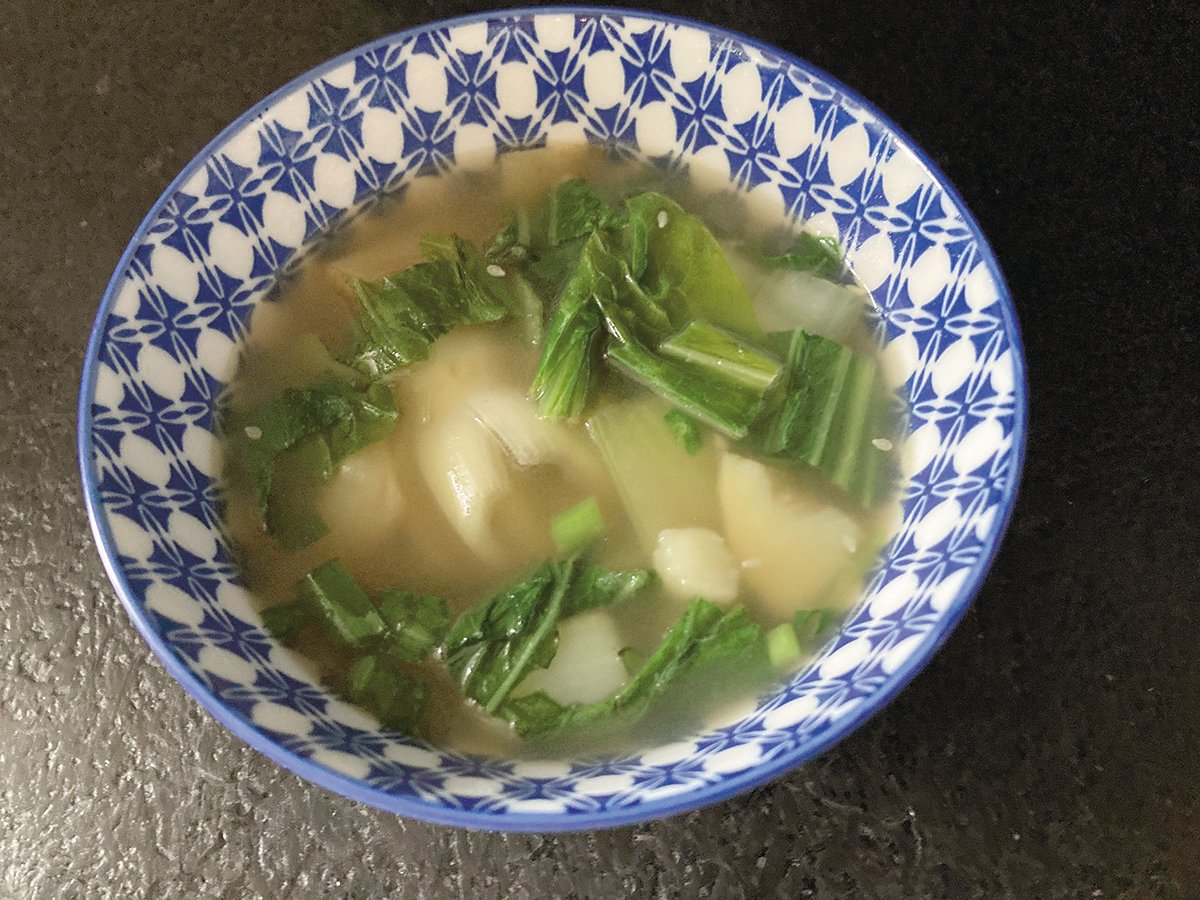 I had given up on bok choy, because I was caught in a rut, adding it to my soggy stir-fry and not much else. I felt bad about it, because the truth is, I wasn’t giving up on bok choy. What’s there to give up on? Bok choy is delicious, versatile and blameless.

I was giving up on myself. Because there are jillions of ways to cook this striking plant, with its white, crunchy, stalks and dark green leaves. I know I’m not the only one haunted by bok choy. There are others like me with geriatric specimen in their fridges, perhaps courtesy of a weekly impulse purchase. You see those curves, and that sharp white dark contrast, and next thing you know it’s in your cart. We latch onto one halfway decent way to prepare it, and call off the search. Next thing you know, you’re bored out of your mind.

When you’re in a rut, it’s not like the larger world doesn’t exist, it’s just that you can’t see it. With enough determination, you can probably crawl out. But sometimes a little bump is all it takes to push you over the top and into a well-lit world full of possibilities.

In the case of my bok choy problem, that catalyst came in the form of a farmer at the market. Nancy is from northern China, has limited English and a great garden. I was there for some garlic chives and nothing more, but she chose that morning — just days after my having given up on bok choy — to give me the hard sell on some heads she had languishing.

She calls it Bai Chai, which means something along the lines of white cabbage, and she sealed the deal with a soup recipe called Bai Chai Tum, which means Bok Choy soup. It’s mostly bok choy and potatoes, with a few seasonings. Thanks to the language barrier, I wasn’t able to get a perfect read on how she makes it, but with what I understood, adjusting as I saw fit, it was a hit. The only ingredient I use that probably wouldn’t be found in Nancy’s northern Chinese version is butter. But hey, it works.

Nancy recommends adding tofu as a protein. I’ve also tried it with egg, shrimp, scallops, browned ground lamb and Chinese barbecue pork, each of which becomes a new ream of flavor to play in. And if you add it all together at once … hey, that’s not bad either!

But before you go crazy, I recommend starting with this simple base. Get a feel for the core flavor of this soup and then build slowly from there.

This soup comes together in just a bit more time than it takes to boil some potatoes.

Optional proteins: Tofu, seafood, meat. You can also crack an egg in and let it cook

Heat 2 quarts of water to a boil. Add the bouillon paste and potatoes. Simmer for about 15 minutes, until they are soft.

While the potatoes simmer, clean the bok choy, as it can be dirty near the base. If you have baby bok choy, submerge them whole in clean water and drain them, repeating as needed.

For large bok choy, pull off each stem — or leaf, however you see it — and wash it separately. Then cut the white halves from the leafy halves of each unit, roughly in half. Chop the leaf part coarsely. Chop the stem part into sections of about an inch in length and keep separately. Trim the bottom of the base and slice it if you like, but definitely use it as it’s particularly flavorful.

When the potatoes are soft, add the butter, sesame oil, soy sauce, fish sauce, oyster sauce, pepper flakes, black pepper and the white parts of the bok choy, including the bases, (if using baby bok choy add the whole things), along with any protein you may care to add. Cook for five minutes at a simmer. Add the bok choy leaves and cook for another 2 minutes.